Features
Home›Features›Opinion: We would better honour Alan Turing by banning ‘conversion therapy’ in the UK

Opinion: We would better honour Alan Turing by banning ‘conversion therapy’ in the UK

The Bank of England has now released into circulation the new £50 note. The design honours Alan Turing.

“Alan Turing was an outstanding mathematician whose work has had an enormous impact on how we live today…” said the governor of the Bank of England, announcing the decision to celebrate Turing’s life on the UK’s £50 note. “As the father of computer science and artificial intelligence, as well as a war hero, Alan Turing’s contributions were far ranging and path breaking. Turing is a giant on whose shoulders so many now stand.”

“He was also gay and was treated appallingly as a result…” added the governor. “By placing him on our new polymer £50 banknote, we are celebrating his achievements and the values he symbolises.” 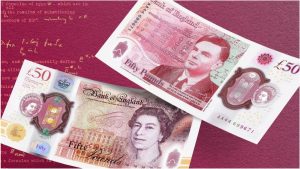 It’s great that Turing is being publicly honoured in this way – visibility and representation matters – and it’s important that the harm done to Turing because of systemic homophobia is also being acknowledged.

But if ever there was moment to increase pressure on the UK government to ban so-called Conversion Therapy, this is it!

The career of Alan Turing

During World War II, Turing worked as part of Britain’s code-breaking centre, where he devised a number of techniques for cracking the intercepted coded messages. Turing is credited with helping the Allied forces to defeat the Germans in a number of key battles, including the Battle of the Atlantic.

Turing was particularly influential in the development of theoretical computer science, inventing the Turing Machine  –  a forerunner of what we now know as a computer. Turing is considered to have been one of the key thinkers in the field of computer science and artificial intelligence.

The life and death of Alan Turing

In 1952, Turing was prosecuted for gross indecency for a sexual encounter with another man. At this time in England, homosexuality was a criminal offence.

As an alternative to prison, Turing agreed to chemical castration treatment.

Turing died of cyanide poisoning. An inquest concluded that his death was suicide.

The pardon of Alan Turing

In 2009, the British Prime Minister made a public apology to Turing on behalf of the British Government.

The legacy of Alan Turing

The early 1950s was a period of persecution for gay men in the UK, with over 1,000 gay men imprisoned and countless more lives ruined by blackmail, entrapment, and prosecution.

The arrest and punishment of Alan Turing was among the most high profile persecutions of gay men during this period. The treatment of Turing seems particularly perverse, given the role he had played in defending Britain during World War II.

It’s likely that Turing’s arrest and subsequent death played a part in the establishment of the Wolfenden Committee, which ultimately led to the decriminalisation of homosexuality in the UK.

A posthumous pardon and a portrait on a bank note seem to be of little consequence when Turing’s life was consciously and deliberately destroyed, depriving us all of the benefit of his mathematical genius. However, by celebrating Turing’s work and contribution to the world as we know it today, it does send a powerful signal that LGBTQ people are now valued and a key part of our society.

Dmitri Barcomi and Seth Majnoon created a play about Alan Turing. Their play, The Heresy Machine aims to push back against the tragic martyr narrative that risks overshadowing the joyful, hopeful aspects of Alan Turing’s life as a gay man who wholeheartedly expressed himself in both his personal life and his work.

“I’m continually struck by how emotional, philosophical and poetic Turing’s work is…” says Seth Majnoon. “He bucks all common assumptions of how mathematicians write and think.”

Have we learnt from the mistakes of the past?

You’d like to think that what happened to Alan Turing couldn’t happen to anyone in the UK today, but the reality is that ‘conversion therapy’ is still being promoted and practised. Young LGBTQ people are particularly at risk.

The UK government has – repeatedly – said that it is going to ban conversion therapy, but it still hasn’t done it. The only thing stopping the government from putting a ban in place is political will – they have the numbers, there’s widespread parliamentary and public support, but they continue to drag their feet and it’s not clear why.

Putting Alan Turing’s face on a bank note is great, but if we really wanted to honour him we would demand that the government put the necessary legislation in place to ban conversion therapy. Call it the Alan Turing Bill, if you want, just do something about it!

Let’s use the publicity being created around the new £50 note to highlight that the only way to truly honour Alan Turing is to ban Conversion Therapy now.