Iranian Kurdish singer Mohsen Lorestani faces a potential death sentence after a Tehran court charged him with ‘corruption on Earth’. That charge can carry the death penalty in Iran.

The Kurdistan Human Rights Network tweeted news of the charge, according to reporting by Q News.

The lawyer for Lorestani confirmed the charge and explained that the alleged incidents happened in a private chat.

According to the reports, it’s alleged that Lorestani posted ‘immoral’ content in a private chat using a messaging app or social media platform. It’s not clear when Lorestani will be tried for the offences that he has been charged with.

Iranian law allows the execution of men alleged to have engaged in homosexual sex despite no evidence of actual sexual activity.

“Our society has moral principles and we live according to these principles…” said the Iranian Foreign Minister earlier this year, defending the executions of gay men.

According to a Britsih diplomatic cable released by WikiLeaks in 2008, Iran has executed up to 6,000 gays and lesbians since the 1979 revolution.

According to Q News, the last known execution of a gay man occurred in January of this year. An unidentified man suffered death by hanging in the city of Kazeroon after a court convicted him of ‘lavat-e be onf’ – sexual intercourse between two men.

Killed for being gay

Every day there are gay men around the world that – because of the geography of their birth – are being persecuted, blackmailed, assaulted, or killed. They’re persecuted  for being who they are, for being gay. 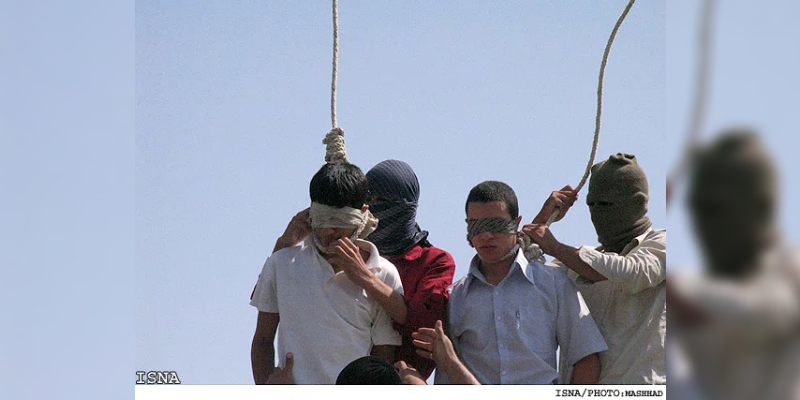 Remember also Jamal Nassir al-Oujan  -  a 15-year-old boy who lived in Syria. Jamal Nassir al-Oujan lived in the city of Mayadin in the eastern Deir ez-Zor province. At that time, this was  territory that was controlled by the Islamic State. On 22 May 2016, he was arrested by the local police, tried by a Sharia court, and convicted of Sodomy. He was sentenced to be stoned to death. According to the ARA News service, he was executed on the afternoon of 23 May 2016. He was stoned to death in Jaradiq Square in Mayadin.

It’s worth repeating, just to let the horror of this really sink in - a 15-year-old boy was publicly killed by having stones thrown at him. He was killed as his community looked on. He was killed for being gay.

Depending on how you interpret the relevant laws, there are currently about 70 countries around the world where gay sex is illegal. Of those, there are about six where the punishment for being found guilty of having gay sex could be death by execution.

It seems extraordinary that we live in a world where the geography of your birth determines whether your sexuality is accepted as just part of what makes you who you are, or seen as something that’s such a threat to the natural order of things that you should be killed.

What we do know is that killing gay men won’t wipe us out.

They don’t make any less of us

I always remember something that US news presenter Rachel Maddow said during the debate around the US Supreme Court’s 2015 deliberations about same-sex marriage. At one point, an ‘anti-equality’ advocate  -  who was a guest on Maddow’s show  –  was making a long-winded point about how it’s important for children to be brought up in families where it’s a man and a woman who are the parents, and that this traditional concept of marriage should be upheld ‘for the children’.

“All of these laws that you’re making or seeking to uphold, they don’t make any less of ‘us’…” interjected Maddow. “They just institutionalise discrimination.”

Dr Qazi Raman, who specialises in the study of human sexuality, summarises the research as:

“We don’t know everything about why our biology creates gay men and lesbians, but we do know that it’s not a choice, that throughout history a minority percentage of our population will genetically be gay or lesbian.”

Every day, in every country around the world, a small percentage of the babies being born will grow up to realise that they’re gay.

It’s an over-simplification, but if you take at face-value the optimistic message of the It Gets Better project  –  founded by Dan Savage and Terry Miller  –  we’re on a linear journey from anti-LGBTQ homophobia towards equality, acceptance, and a freedom from discrimination. Obviously, different parts of the world are at different stages of that linear journey.

Living in the UK, it’s easy to think that much of the struggle for recognition of the reality of human sexuality, and a general acceptance that there is no basis for discriminating against LGBTQ people, has been safely achieved. Legislative and social change has been quickly building momentum  –  with the passing of legislation to enact marriage equality there was a palpable sense of relief across the UK’s LGBTQ community that: “We’ve done it!” “We’ve got there!” “Finally, we can stop fighting for acceptance.”

But let’s not forget the lessons of our history. During the Weimar Republic years in Germany (1919–1933), Berlin was an open and accepting society where diversity of lifestyle, thought, and sexuality was allowed to flourish and was celebrated. A few years later gay men were being branded with pink triangles and transported to concentration camps where many of them died.

Things change. Public opinion shifts. What was once assumed to be an established state-of-affairs can quickly transform into a different reality.

Take, for example, Russia. The history of Russia is fascinating  -  from the wealth and extravagance of the Tsars, through revolution, cold war, and violent political and social upheavals. It makes you wonder what’s going on in a country, in a community, that it has to start looking for scapegoats. Laws banning ‘gay propaganda’ seem to be signs of a leadership and of a community looking for excuses or distractions from deeper problems that they’re not ready to face up to.

But it’s not just Russia – there’s countless examples around the world where not only does it not seem to be getting better for the gay men who live there, it actually seems to be getting worse.

It’s easy to become fixated on our own experiences, or the stories that fill our daily media and news feeds. Around the world, gay men, and people that identify within the LGBTQ umbrella, are struggling against systemic discrimination, criminalisation, and threats to their personal safety. None of that will make any less of us.

Every day, in every country around the world, a small percentage of the babies born will grow up to realise that they’re gay. Let’s try and make sure that the world is a safer place for the LGBTQ people of the future.

Just in time for Halloween, our favourite ...