It’s fairly clear that the resilience that we often associate with LGBTQ people isn’t foolproof. We can all have dark moments. If your support networks miss the signals, it’s easy to become a statistic – another queer person who didn’t make it.

The UK’s National Health Service – the NHS – confirms that its studies demonstrate that queer men experience higher levels of anxiety, stress, depression, and suicidal feelings than heterosexual men. Rates of drug and alcohol misuse have also been found to be higher.

According to the NHS, poor levels of mental health among gay and bisexual people have often been linked to experiences of homophobic discrimination and bullying. For some, other factors such as age, religion or ethnicity can further complicate mental distress.

The NHS also confirms that many queer men have experienced:

The NHS studies explicitly link the experiencing of these difficulties to the mental health issues that queer men often struggle with, including:

LGBTQ people are incredibly resilient and, in general, we’re pretty good at presenting a positive image to the world. However, regardless of what our Instagram may be telling you, the reality may be much darker, and much more complex.

Make sure that you regularly check-in with your queer friends. Don’t assume that they’re doing great just because that’s what their social media status updates suggest. They may not even realise that they’re at risk of falling apart.

Do I need a therapist?

I’d never really thought that I would benefit from seeing a therapist or a counsellor, but after work-shopping some trust and intimacy issues over lunch with my friend Stephen, he took charge and booked me in for a session with his therapist.

As I made my way to the session on the day of the appointment, I was a bit apprehensive as to what I was letting myself in for. I was met by Nicholas Rose — my counsellor for this session.

Perhaps I’ve watched too many sitcoms, but I was expecting the counsellor to be aloof and stand-offish — not saying much, occasionally making some notes, maybe raising an eyebrow.

Thankfully Rose was friendly and engaging. We sat opposite each other in comfortable lounge chairs.

“So, what would you like to talk about?” he asked.

I won’t bore you with the details, but I found the process fascinating but also at times excruciatingly uncomfortable. I would make bland third-person statements about challenges in engaging and communicating, and Rose would gently probe and push me to try and articulate my feelings, emotions, and motivations in a more honest and authentic way.

I left the session feeling a little bit raw, a little bit exposed and little bit vulnerable. In my first 50 minute session with Rose, I’d shared things that I haven’t ever shared with anyone else, and got to know myself a little better as a person.

I was a bit annoyed with myself for not having embraced this kind of counselling earlier in my life.

One of my lasting impressions from watching nine seasons of Seinfeld and a lot of Woody Allen movies is that everyone in New York has a therapist. In London however it’s not really something that we talk much about. Relationships go through rough patches, friends grapple with redundancy or addiction problems, loved ones are coping with loss or grief, and we’re not equipped to offer much more than a shoulder to cry on.

I spoke with Monty Moncrieff, Chief Executive at London Friend — an organisation that specialises in counselling for the LGBTQ community.

“Counselling is an opportunity to explore feelings or ideas about a range of issues — it may be a useful option for people feeling uncertain about things going on in their life, or for people wanting to change the way they react in certain situations, or as a way of dealing with unexpected or difficult situations…” explained Moncrieff.

“Sometimes LGBT people may not feel comfortable disclosing the need for counselling to their doctor if it is related to their sexual orientation or gender identity…” continued Moncrieff. “They may have experienced negative reactions in other services or have experienced homophobic or transphobic behaviour and attitudes in other areas of their lives and want to come to a service where they know this won’t happen. Or they may simply feel that they want their counsellor to be LGBTQ themselves.”

Cost or access to an LGBTQ specialist counselling service may not be the only barriers to people getting help as, according to Moncrieff, there’s still considerable social stigma attached to seeking help through counselling, particularly in relation to mental health issues:

“Research has consistently shown that LGBTQ people experience higher levels of common mental health issues such as depression, anxiety and low self-esteem than the general population, and there are still many incidents of LGBTQ people having negative experiences of health care.”

Private therapy or counselling sessions can be quite expensive, but your health service may have therapy services available, or you can access them through LGBTQ charities.

Simon Dunn – an Olympic bobsled competitor and high-profile rugby player with the Kings Cross Steelers – has written a candid and personal message about his social media persona and his struggles with body image and mental health.

Dunn posted a photo of himself on the rugby field, alongside a lengthy statement about what that photo meant to him.

“The online persona I show you is all photoshoots, parties and magazine covers…” wrote Dunn. “This hasn’t always been entirely the truth. Earlier this year, I found myself back in Australia, living in a country town in my mother’s spare room and financially broke.”

“Having to rebuild my life at the time felt like a monumental task. I honestly didn’t think I could do it. I stopped looking after myself, drinking most weekends away, stopped training, all things which compounded the low point I was in. It honestly felt all the years of hard work had only led me back to where I began. For the first time in my life I’d felt anxiety, which was something new, scary and very overwhelming at times.”

“Only weeks earlier I was living in London with my partner, running my own business, attending every party I was invited to, appearing in countless photoshoots and magazines. Before this I was in North America representing Australia in bobsleigh, training and competing, whilst getting flown to media gigs and appearances all around the world.”

“I was passionate about doing everything I could to show the world that out and proud athletes exist. I felt the world was my oyster and this was my chance to do exactly that. I felt like I’d failed and let so many people down. Life over the last several years has been a truly amazing adventure. This now felt all but a distant memory. Many tears were cried over many nights, and some days I didn’t want to even get out of bed.”

“This image is me at the height of that time, I questioned if I should post it because it doesn’t portray the person I show the world. There’s no abs, I was unhappy and lost. It portrays the real me, someone who, like everyone else, has obstacles they need to overcome. My little victory is being able to post it now, only a few months later, passionate for life again and looking forward to the next adventure.”

“The Simon you see online is the Simon I want you to see, maybe it’s my pride or the influence of social media, but it’s not always as it seems. Life is a series of ups and downs, just remember – there’s always light at the end of the tunnel no matter how dark it may seem!” 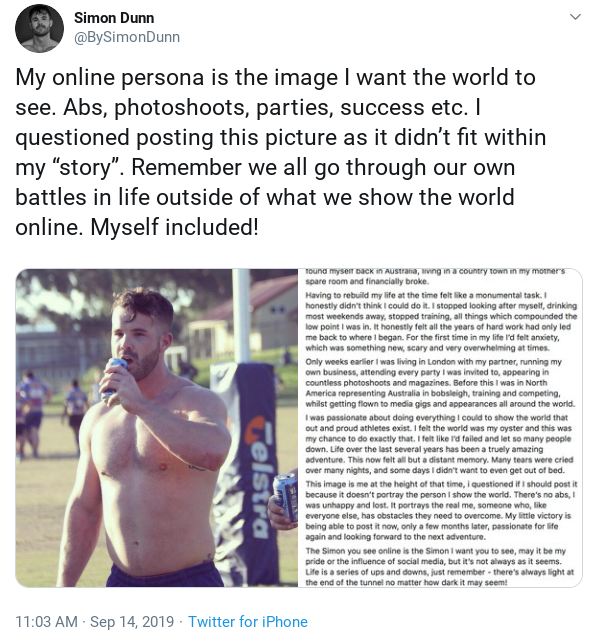 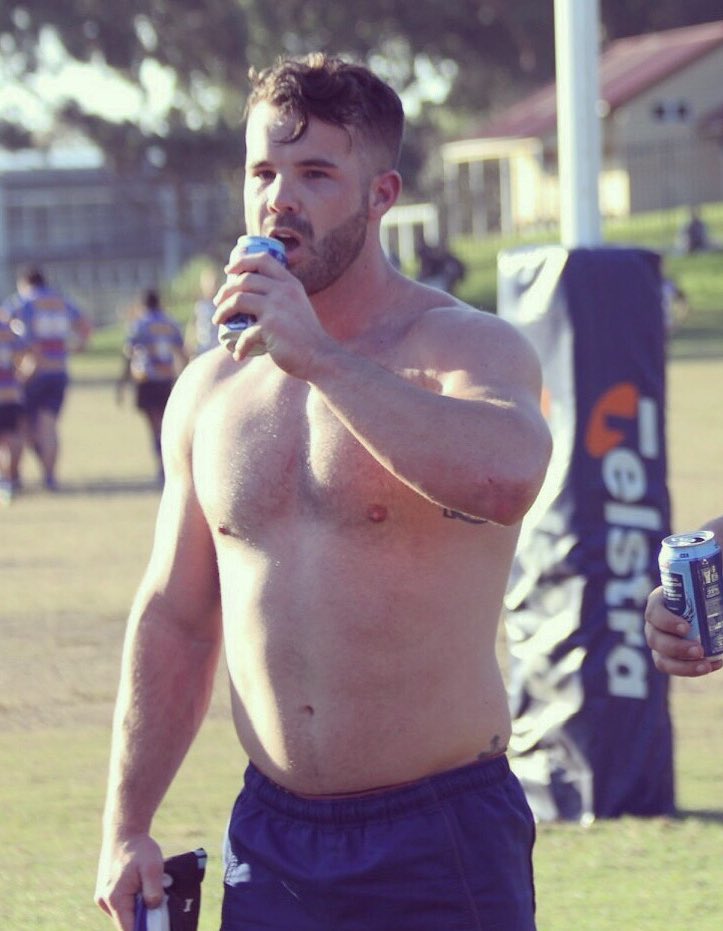 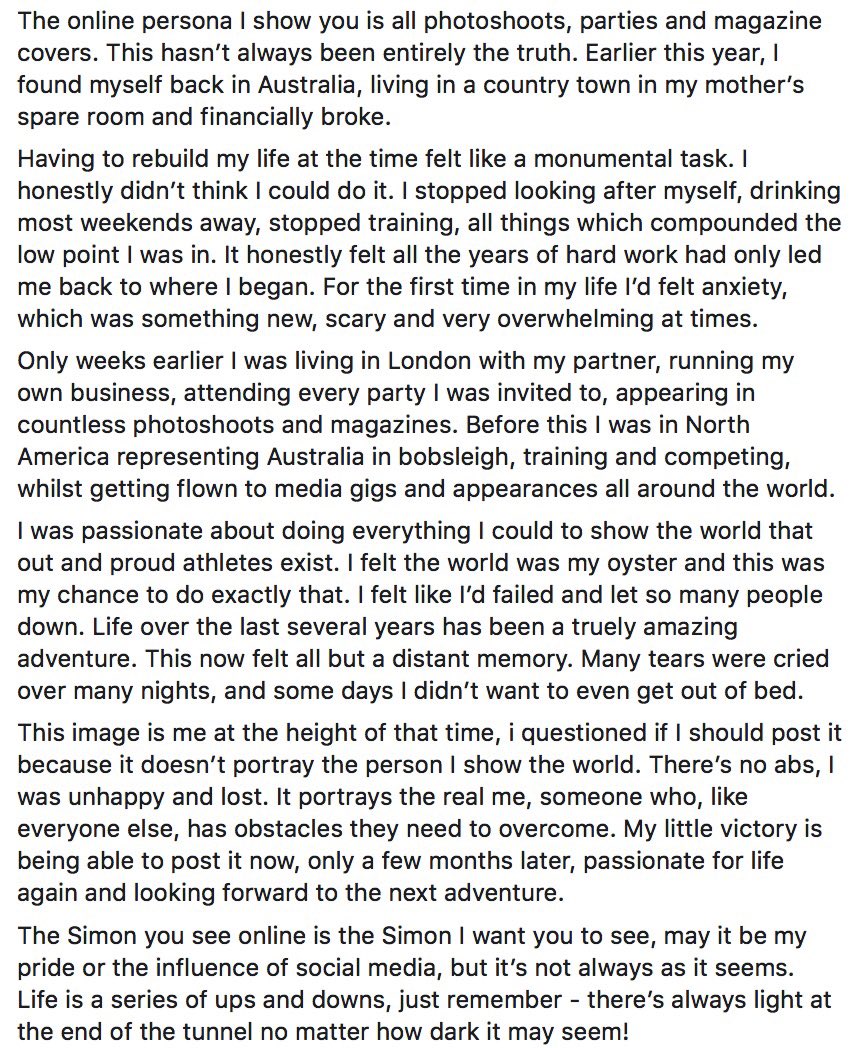 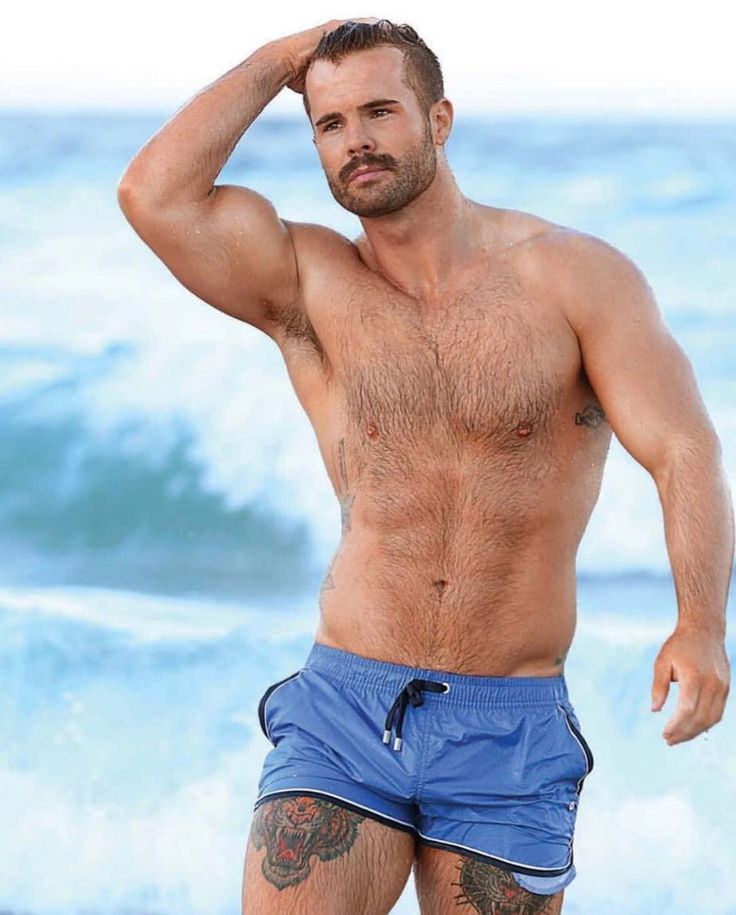 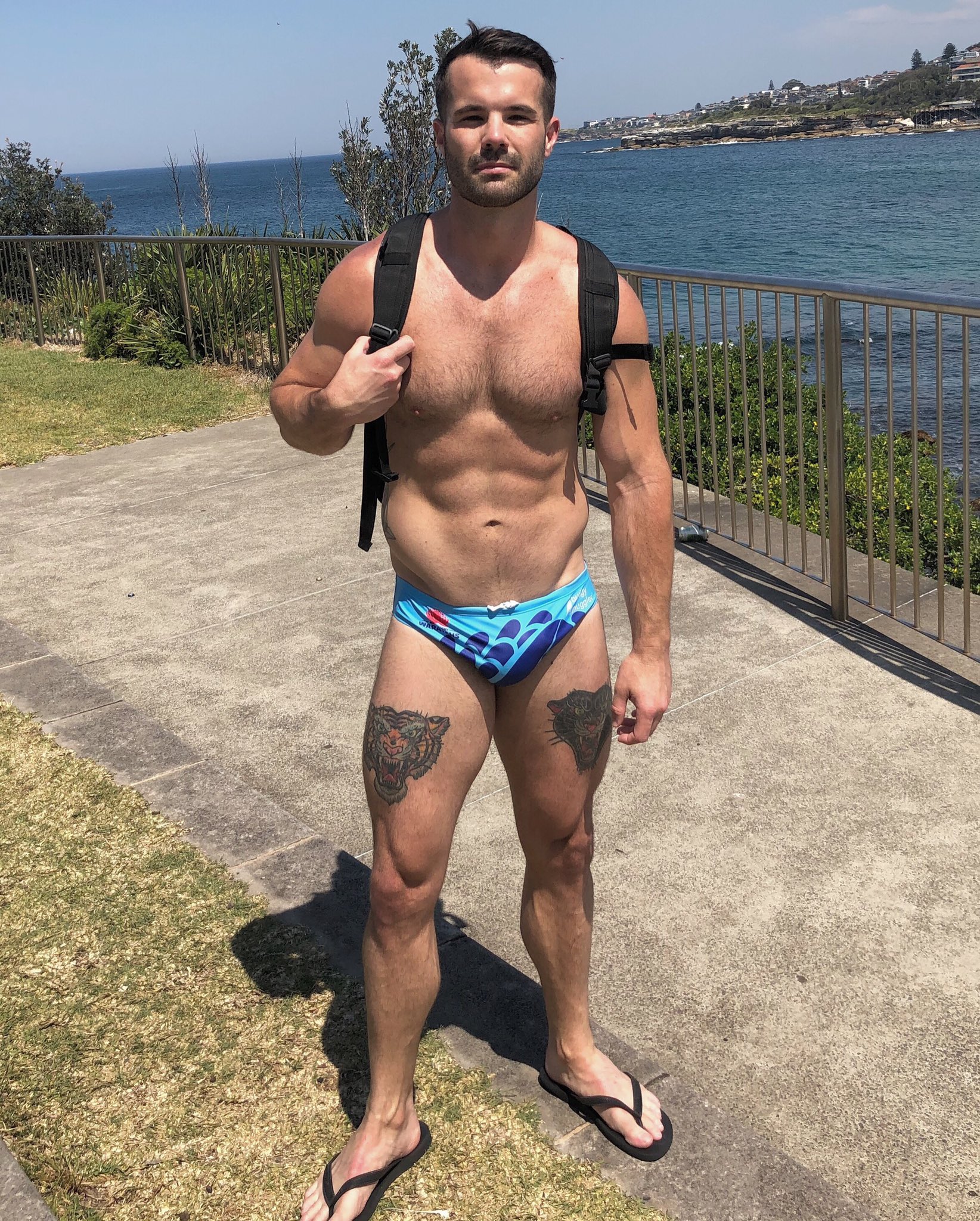 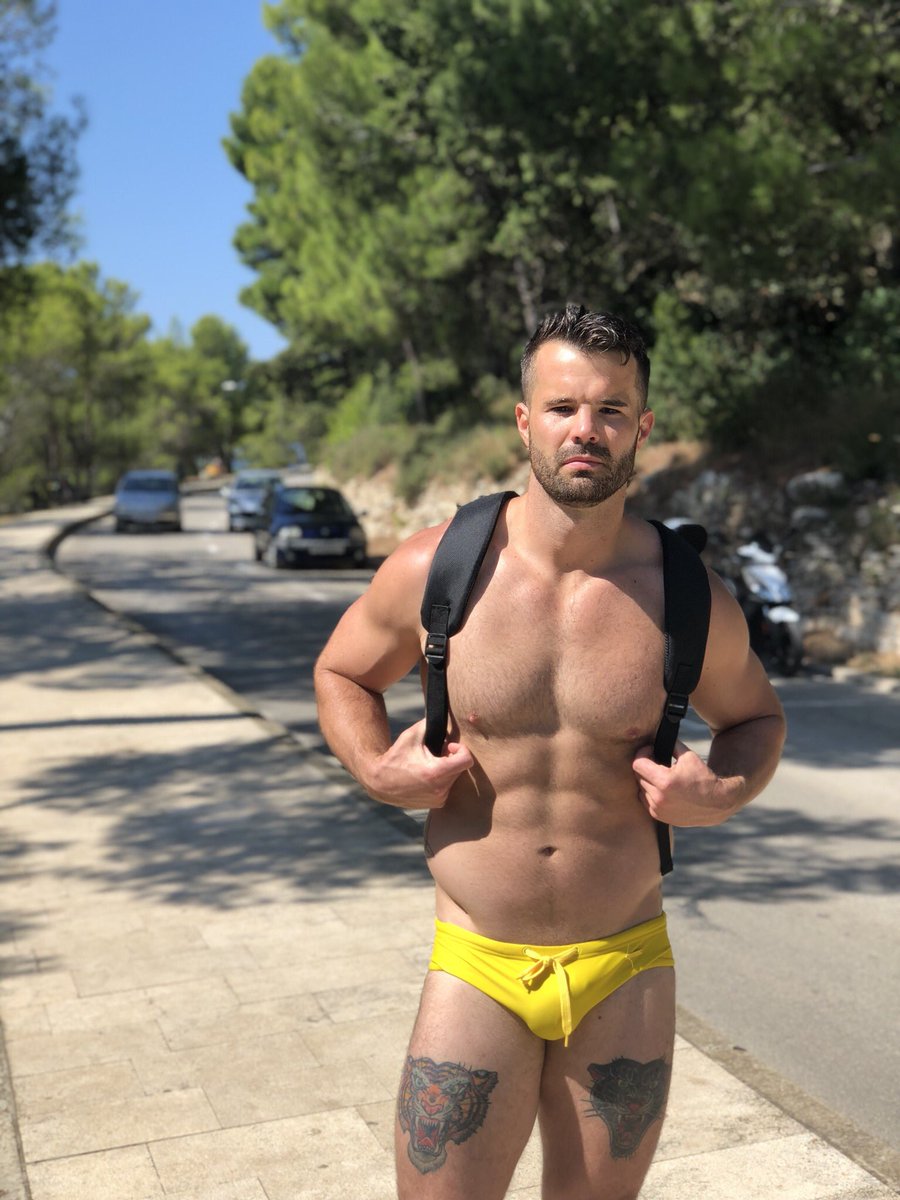 There’s nothing Basic about these guys – ...