In 1935 Paramount International was the last Hollywood studio ever to release a silent film. For the brief period that silent movies ruled, those who were deaf or had hearing impairments could equally share in the new medium of motion pictures. With the advent of sound and the release of The Jazz Singer by Warner Bros., everything changed, and eventually, with few exceptions, movies would be a medium for those who can hear.

While deaf characters have shown up in films, they were often misrepresented and played by actors that can hear similar to the way LGBTQ roles are played by straight actors or disabled characters are portrayed by able-bodied actors. In the last few decades, Deaf Cinema and the movement to have deaf parts played by deaf actors has gained momentum. Still, feature-length movies for and about deaf main characters and projects written, produced, or directed by those who are deaf are rare, leaving a void in cultural representation and opportunity.
From a demographic standpoint, approximately six hundred thousand deaf individuals in the United States and six million individuals with some hearing impairment. That may not seem like a lot in a country with three hundred million people unless you are deaf and want to work in front of the camera. The odds are not in your favor.

Still, it is not impossible to be successful, and role models exist. Thanks to technology, I had the great opportunity and privilege to have a series of virtual conversations with the very talented Actor, Director, and Producer Eddie Buck. Eddie has an impressive list of credits to his name for both stage and screen, from his first role at age 7 in a national commercial to one of his most recent parts as Hank in Talk to the Hands, currently in post-production. Not only is Eddie Buck an extremely talented industry professional, but he is also amongst an underrepresented group of industry professionals that also happened to be deaf.

According to The Dallas Hearing Foundation, Four thousand deaf children are born each year. About 3 out of 1000 children have a major hearing impairment. Ninety percent of deaf and hard-of-hearing children are born to hearing parents.

What resulted in your being deaf?

I became deaf as a result of complications from being born premature. I was born nine weeks early and only weighed 3 pounds 13 ounces and I spent two months in the hospital.

What was it like for you growing up being deaf?

Many people told me that I would never go far or make it in acting, that it would be hard, if not impossible, for me to get roles because I am deaf. I was like, no, that’s not the correct answer. I am going to keep going and prove them wrong. I was also bullied, but I’ve always told myself I’d never let anyone tell me I can’t do this because I am deaf.

Did someone deaf inspire you when you were growing up?

Oh yes! A few teachers said that I could be a good influencer. They told me to see my ability to go far as an actor.

Your acting education is quite interesting. Can you share a bit about that?

I went to the Disney World College program during college, and then I went to Bloomsburg University, where I got my bachelor’s in Theater Arts with an emphasis on performance studies.

One would expect that New York would have one of the best-known theatre groups, but the list includes California, Illinois, Tennessee, and Alabama. According to an article in verywellhealth, The National Theatre of the Deaf, which has been instrumental in founding many deaf theatre groups, led the way for modern deaf theatre beginning in 1967. Still, deaf theatre’s history goes back much further. It has its roots in the drama presented at deaf schools and colleges such as Gallaudet as far back as the 1860s.

What was your first film?

I landed my first role in Gala and Geoffrey as a supporting actor. From there I went on to other roles and have had the opportunity to work with some great actors and professionals.

And what have been your favorite role or roles so far?

Hmm, that is an excellent question. Probably The Last Words where I played the character of David. It is based on a true story. It was challenging; very emotional and raw, I cried. It is one of my best and most authentic works so far.

You recently did a short series produced by Kelsey Grammer. Can you tell me about that and what it was like?

Yes, that was my last project. I had fun; it was a great cast. I am good friends with Mason Grammer and her mom Camille.

Probably unbeknownst to most people, there is an extensive list of well-known deaf or hard of hearing actors, directors, and producers. Among these is Marline Matlin, who was the first deaf actor to win an Academy Award for her role in Children of a Lesser God. Unfortunately, as with other marginalized groups, until the late 20th Century, most deaf characters were not correctly represented.

There is a project that has been in the works for years that was written for you. Can you tell me about that?

Yes, it was written for me, and they decided to give the character my name. My deafness inspired them. They already have some A-list actors on board who have a few Oscar nominations. They just need the producers who would be interested and the investment. It will take about a million dollars to bring it to the screen.

That raises an interesting question. As a deaf actor, is it hard to find roles?

It depends. Usually, non-disabled actors play disabled roles, including deaf parts. It’s getting better, but I have always had to find someone that believes in me and would give me a chance.

I can relate to those LGBTQ actors; since there are very limited opportunities for deaf actors when it comes to deaf roles, they should go to deaf actors to be authentic. While a hearing actor can play deaf, no one can know what it is like unless you are deaf. The same is true for someone who is LGBTQ; there is a level of authenticity that exists. I know some would say, “Hey, it’s acting,” but there are many other roles and opportunities for actors who can hear, are not LGBTQ, or fall into different minority groups.

According to a Hollywood Reporter article, In December 2017, more than 70 individuals signed a letter in response to the casting of a hearing actor in the role of a deaf character in the miniseries The Stand. The letter stated, “We will not endorse, watch, or support your miniseries … We will share our displeasure of the casting decision and airing of the miniseries … with our Deaf community, signing community, friends, and family of Deaf individuals. Together, we make up 466 million worldwide.” According to the letter, “not one Deaf professional actor was called in to audition for the role.”

What actors would you like to be able to work with if you could?

There are a bunch of people I look up to. I would like to work with Eddie Redmayne, Meryl Streep, Julie Bowen. I have been told that I look like Eddie Redmayne. Also, Marlee Matlin who I had the pleasure of meeting, a mentor of mine Anthony Natale, and Jimmi Simpson who also went to Bloomsburg college. Jimmi is a few years older than me, but we had the same advisor who introduced us. After winning his first Emmy nomination his career took off and of course, Bloomsburg went crazy.

I would agree that you could play relatives for sure, and ironically, you share the same first name, so that would be an interesting billing. You have done stage work too, do you enjoy working in the theatre?

Oh yes. I have had the privilege of working with Growing Stage theatre in News Jersey, Deaf West Theatre in LA, RIT for a few years, and Bloomsburg Theatre Ensembles. I also worked with BUPlayers during college.

Going back to who I would like to work with, I hope to work with Jimmi Simpson. We both graduated from the same college; he is a few years older than me and had the same advisor who introduced us. After winning his first Emmy nomination, his career took off, and Bloomsburg went crazy when he came to visit.

You were living in LA until COVID basically shut everything down, and you moved back to PA. What have you been doing during this time?

I continue to pursue my acting, and I work for a deaf school and teach asl classes in between. I love working with kids to inspire them to pursue their dreams.

What has been the most challenging thing about this pandemic for you?

Moving into a new career that I am not used to and living in a unique situation. Everything changed with the pandemic, and I ended up moving back to PA. It has been difficult having to adjust to new routines, schedules, and challenges.

You recently did something exciting, and it was the first for any deaf person, can you tell me about that?

In June, I participated in Mr. Universal in Tampa, Florida, representing my home state of PA. I have been a fan of the pageant world and would go to support friends who would compete. I was encouraged to do it, so I am. They have never had a deaf male compete; I think it helps break stereotypes, as a deaf person without limits.

How many were in your division, and where did you come in?

There were eight competitors in my division, and I was the first runner-up. It was amazing and overwhelming; I was just humbled to be part of it and be the first deaf competitor. 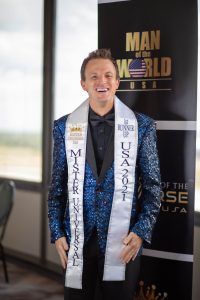 I understand you are also working with a new and upcoming writer on a screenplay; what can you tell us about that?

I can’t say much at this point except that I am working with a very talented writer who is part of the LGBTQ community. He is developing a piece where the main character is deaf. The story is told from the main character’s perspective and it is a drama touching multiple themes to have broad appeal. The concept is very unique. We already have interest from other actors and a composer.

What advice would you give actors starting regardless of their physical abilities?

My advice is to go and grab opportunities, and if they don’t exist, create them. If you want to do something, just do it, keep your passion, and don’t give up. When it comes to challenges, you have to keep going. If you haven’t found your dream role, it is still out there.

It has been a great pleasure to have these conversations and get to know you and your work. I sincerely appreciate it and can’t wait to see your upcoming projects.

Eddie is an advocate, supporter, and ally to those who are marginalized and under-represented both in the entertainment industry and society as a whole. One of his objectives as an actor is showing that no matter what you may be faced with, you can achieve your goals and dreams no matter what anyone tells you.

Although he keeps his personal life private, Eddie grew up in PA and is the oldest child with a sister five years younger. Eddie’s father is a business owner, and his mother is a teacher for the deaf. To learn more about Eddie and his work, you can check out his IMDB listing.

Remembering the power of George Michael