Heroes
Home›Heroes›Can we claim the new Prime Minister of Finland as part of our rainbow family?

Can we claim the new Prime Minister of Finland as part of our rainbow family?

Sanna Marin is set to become the world’s youngest prime minister at the age of 34 when she takes on leadership of the government of Finland. She will be sworn in later this week.

According to reporting by the BBC, Marin is currently the Minister for Transport in the government, and has been selected by her party – the Social Democratic Party – to step up to the role of leader following the resignation of incumbent Antti Rinne. Rinne was forced to resign when one of the government’s coalition partners removed their support from him following a dispute regarding his handling of a postal strike.

There are unlikely to be any major policy changes, as the coalition agreed a program for government when it took office. However, Marin, who won the vote for prime minister by a narrow margin, made it clear it would not be business as usual.

“We have a lot of work to do to rebuild trust,” she told reporters. She brushed away questions about her age, saying: “I have never thought about my age or gender. I think of the reasons I got into politics and those things for which we have won the trust of the electorate.”

Ms Marin will be the third female prime minister in the Nordic country. The Social Democrats emerged as the largest party in elections held in April, and so can appoint the prime minister who leads the coalition government.

Who is Sanna Marin?

Marin rose quickly through the ranks of the Social Democrats, heading the city administration in Tampere at the age of 27 and becoming an MP in 2015.

She has been transport and communications minister since June.

How queer is Sanna Marin?

Marin and her long-term partner Markus Räikkönen have a young daughter together.

But we can definitely claim Sanna Marin as part of our extended rainbow family. Marin is the daughter of same-sex parents.

In media interviews, Marin has talked about how she felt invisible as a child because she wasn’t able to talk openly about her family.

As Prime Minister, Marin will lead a centre-left coalition with four other parties. All five parties in the governing coalition are now all headed by women.

It’s also worth noting that four out of the five party leaders in the coalition are under the age of 35. 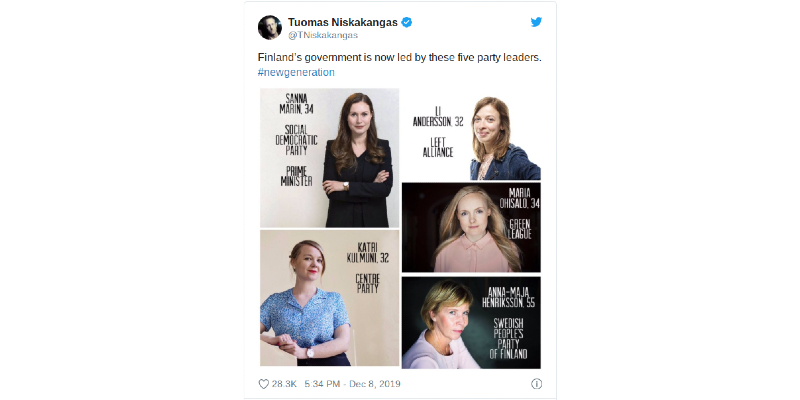 Are you embarrassed to discuss how you ...