There’s a lot to love about Dua Lipa.

Why does Dua Lipa have so many queer fans?

Dua began forging bonds with LGBTQ fans in late-2015. That was when she dropped early singles Be the One and Last Dance.

“The gays definitely caught onto her first,” says 18-year-old Tom from south London. He’s a massive Dua fan who’s seen her live six times. “Going to her concerts before and after New Rules was funny because before it was like 90% gays. After it was like a 50-50 gay-straight mix. I don’t think there’s been a British pop girl like her in a while. It was something that we wanted. I also think that because she’s young, she’s very relatable to us, especially on social media. That’s something that definitely appealed to me.”

Fuelling our girl-on-girl fantasies, Dua Lipa has teamed up with Miley Cyrus for the track Prisoner.

The video is wild – and we’re here for every bit of it.

Fever is a collab with Angèle and it’s pretty awesome.

Anyone who’s ever been tempted to welcome back a toxic ex can relate to New Rules. ‘Don’t pick up the phone, you know he’s only calling ’cause he’s drunk and alone,’ Dua Lipa warns. But because queer relationships can have extra complications relating to a struggle to accept our sexuality and identity, it strikes a particular chord with queer ears. Factor in the clever and impeccably choreographed video, a dazzling celebration of female solidarity, and New Rules became an event record.

“I think the LGBTQ community can seek out the authentic artists early on…” says Scott. He’s a 23-year-old guy from Glasgow who readily admits he’s a Dua ‘Stan’.

“That’s why artists like Dua have this long road to fame. It takes a while for them to cast a net out to other demographics. The LGBTQ community are good at catching on to something good quick.”

Scott says that Dua Lipa’s personal journey, which included moving to London from Kosovo at age 15 to pursue her music career, leaving her family behind, resonated with him when he was getting to grips with his sexuality. 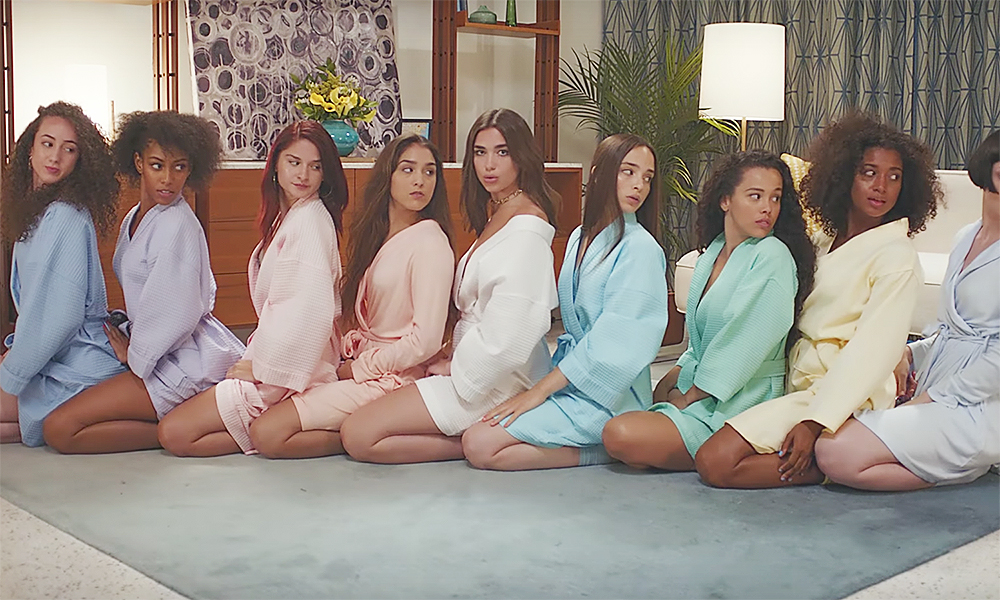 “She knows exactly who she is as a woman and artist”

“She’s an artist that could have easily been put in a box and labelled as ‘any other pop girl’, but she’s refused to do that…” Scott explains. “That confidence that she has at such a young age to be un-apologetically her. She knows exactly who she is as a woman and artist. It was like a rocket up the arse for me to finally take my life by the horns a little.”

As her fanbase has expanded with hits like Hotter than Hell, New Rules, IDGAF, she’s established herself as a rock-solid LGBTQ ally. She featured a rainbow flag in 2016’s Blow Your Mind video, adding inclusivity to its girls’ night out theme, and speaks about LGBTQ equality frequently in interviews and onstage.

“She has a special bond with LGBTQ fans because she recognises that a lot of her first fans were from this community. I kind of feel like she appreciates that…” says Tom.

For LGBTQ women, Dua Lipa’s appeal has some different facets. Pip, a 23-year-old queer woman and music editor from London, says with her New Rules and IDGAF videos, Dua has “very much chosen to paint herself as a girls’ girl.”

“Even though the content of the songs is ostensibly about men, she’s chosen to pair them with videos centring women,” Pip explains.

“There are so many really tender shots of women nurturing and caring for each other. That’s something I think is rare and exciting to see in the mainstream.

“Then of course there’s the fact she’s really fucking hot in a way that doesn’t necessarily appear tailored to men. She has heavy brows, wears sportswear and over-the-top occasionwear.

“I do think she’s aware of some of these things, and maybe plays it up to a point where it’s a little queerbait-y. But at the same time, we’re so unused to being a group that’s catered to in mainstream pop. I think most of us are willing to let it slide.”

“Dua Lipa is a different kind of LGBTQ icon. She’s a new generation”

“The icons of the past were a bit out of reach…” Scott argues. “Dua is a different kind of LGBTQ icon. She’s a new generation.”