Features
Home›Features›Have things got better for gay men in Chechnya?

Have things got better for gay men in Chechnya?

It’s been nearly three years since the first reports of emerged from Chechnya of the systematic and state-sanctioned persecution of LGBTQ people.

In a recent development, the Russian LGBT Network has appealed to the European Court of Human Rights to try and obtain international support for the LGBTQ victims of Chechen persecution.

The specific application that has been lodged by the Russian LGBT Network is on behalf of Arbi Altemirov. Altemirov is one of the victims of the Chechen purge against LGBTQ people. The basis of the action is violation of articles of the European Convention on Human Rights – specifically article 2 (Right to life), article 3 (Prohibition of torture), article 5 (Right to liberty and security), article 13 (Right to an effective remedy), article 14 (Prohibition of discrimination), and article 34 (Individual applications).

Arbi Altemirov did not publicly identify as LGBTQ. He was married to a woman, and the couple had adopted a son. At the end of February 2017, Altemirov was arrested on suspicion of homosexuality. He was detained for more than two weeks in a detention centre that was being used to hold gay men as part of the officially-sanctioned purge. According to the evidence presented by the Russian LGBT Network, four eyewitnesses saw him in detention and testify that he was beaten severely.

In early March 2017, Altemirov was among a number of men who were returned to their families with a recommendation from the authorities that they should be killed to remove the shame from their families.

Altemirov’s death was recorded on 8 March 2017. He died at home in the presence of family members. He was buried the same day. The death certificate records the cause of death as thromboembolism – a blood clot. An autopsy was not performed.

“The Altemirov’s appeal is unique because in this situation a dead person is represented by a charitable organisation, not by his family…” explained Veronika Lapina of the Russian LGBT Network. “However, there is a precedent that confirms that this is possible where there are no relatives to represent the deceased.”

Reports of systematic persecution of gay men began to emerge from Chechnya in April 2017.

Citing sources from within the Chechen special services, Russian-language newspaper Novaya Gazeta reported that in the period February to April 2017, over 100 men had allegedly been detained and tortured, and that at least three men had been killed as part of the crackdown.

As international concern grew, Alvi Karimov, spokesman for Ramzan Kadyrov  –  the Head of the Chechen Republic  -  not only denied that there was any persecution, but also denied the existence of any gay men in Chechnya. The Guardian reported that in his comments, Karimov suggested that gay men in Chechnya would be killed by their own families.

“You cannot detain and persecute people who simply do not exist in the republic…” said Karimov. “If there were such people in Chechnya, the law-enforcement organs wouldn’t need to have anything to do with them because their relatives would send them somewhere from which there is no returning.”

Chechnya is a predominantly Muslim, ultra-conservative society in which homophobia is widespread and homosexuality is taboo. Reporting by The Guardian confirmed that Chechnya is a country where having a gay relative is seen as a stain on the entire extended family.

Since April 2017, the Russian LGBT network has evacuated about 150 people from Chechnya, most of whom have already left Russia.

Not safe in Russia

For LGBTQ people seeking to flee persecution in Chechnya, the easiest escape route is into Russia. However, it’s clear that Russia is not a safe-haven for Chechens.

Monitoring by the Russian LGBT Network has brought to light the attempted abduction of Zelimkhan Akhmadov – a gay man from Chechnya who was living in St Petersburg in Russia. Akhmadov was attacked while he was in St Petersburg. The attack was led by his family, who were attempting to force him to return to Chechnya. Zelimkhan Akhmadov had been in hiding for almost a year. There had already been previous attempts to abduct him and force him to return to Chechnya because his family suspected that he was gay.

According to the Russian LGBT Network, on 13 July 2018, five people attacked Akhmadov near his home in St Petersburg, forcing him into a car. Friends of Akhmadov contacted police. The registration details of the car had been recorded by the security of the residential complex where Akhmadov lived  -  it was standard procedure for them to record the details of all vehicles entering and exiting the complex. The registration details of the car led police to where Akhmadov was being held by his father.

The police took Zelimkhan Akhmadov and his father into custody. Akhmadov senior threatened Zelimkhan, stating that he was the shame of the whole family, and that because of him their entire extended family was subject to a death threat. Zelimkhan was freed by the Russian police, and Akhmadov senior was prosecuted for abduction.

Neil Durkin of Amnesty International UK has confirmed that the report is reliable.

“In our view, it’s a clear demonstration of how there’s no safe ‘internal flight’ for people from Chechnya…” said Durkin. “If his relatives succeeded in getting him back home, we think there’s a real risk he could be murdered in an ‘honour’ killing.”

“The Russian LGBT Network and Novaya Gazeta reported that some of the people killed in the ‘gay purge’ were killed by their own families…” added Durkin. “Remember the story regarding popular Chechen singer called Zelimkhan Bakhaev, who ‘disappeared’ when he came to Chechnya for a family event. In a press conference, Chechnya’s leader Ramzan Kadyrov mentioned this case and hinted that Zelimkhan was ‘dealt with’ by his own cousins.”

Tanya Lokshina  –  Associate Director for Europe and Central Asia for Human Rights Watch  –  also confirms that the Chechen Republic remains a dangerous place for LGBTQ people. “LGBT people in Chechnya remain extremely vulnerable, coming out of the closet would be simply suicidal, and being outed puts one at risk of persecutions and honour killing.” 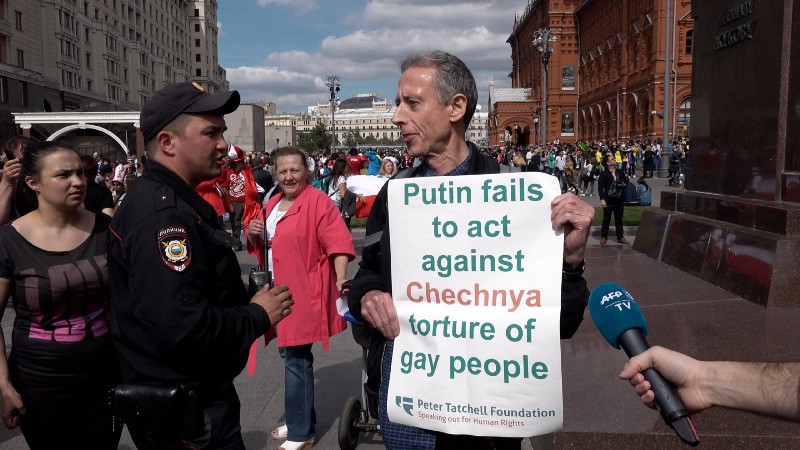