Features
Home›Features›Horny and High – a comic about chemsex, cruising, and heartbreak.

I’ve had a desire to make comics since I was 10 and taped Terry Zwigoff’s brilliant Robert Crumb documentary on BBC2. For a child from the suburbs, raised on the timid cheeky schoolboy antics of British comics like Beano and Whizzer and Chips, it was mind-blowing, subversive, inventive and very freeing.

I also discovered Calvin and Hobbes, an incredibly expressive comic that stayed so true to the characters and showed the range of ideas and images you could have fun with while sticking with the same small cast of characters in the same setting.

I dabbled around with comics but never quite had the confidence to see many things through as a writer.

Around 2014, a close friend was getting mixed up in chemsex and sex work with chems, and told me this story about a big chillout where two of the guys there went into a G-hole, one after another. It’s also called G-ing out. After a long time on GHB you can start twitching and talking nonsense and flailing about in distress without being able to articulate what’s going on – it sounded so disturbing.

They had no empathy for each other, and while one berated the other for losing control, all the other guys carried on having sex around them, blocking it out. It seemed so nightmarishly unpleasant – it stayed with me, I wrote it down, feeling certain this story had legs. But I had no idea what to do with it, as I hadn’t started making comics.

What’s been the creative process to create the narrative and illustrate the story?

In 2019, I put aside everything else and decided I was just going to write until I had a strong script and characters I would enjoy drawing.

From that year of simmering away, I got lots of good stories, but the one I was most interested in was Chillout. It seemed to cover a lot of ground about trauma – how we cope with it, in ways constructive or unhealthy – and where the struggle for equality has got us so far.

My own experiences with group sex and drugs have sometimes given me very dark glimpses into people – often the kind of people who think sex is something you snatch from other people, rather than something you collaborate on. The writer’s notebook in my head is always filling up with notes. Those flashes of grimly selfish attitudes went into this story. I can’t bear people who create a bad atmosphere – so this story is full of them!

I also did a lot of research – chemsex is only recently being understood as a healthcare crisis, and journalists such as Patrick Strudwick have put a lot of work into raising awareness of this mess of issues that must necessarily be understood together.

Stephen Collins is the lead for Chemsex and Crime within the probation service and he’s been a great source of insight into this other side of chemsex – the world that awaits if things go really wrong for you and you have a sober reckoning in the justice system. It really is a messy place – even if you personally think you’re treading carefully, you can be implicated and involved in things you never imagined you would accept.

What is often missed in discussions about chemsex crime is vulnerability, and how men are discouraged from acknowledging it and owning it – that can be at the root of a lot of impulsive and addictive behaviour.

I’m inspired by filmmakers like Michael Haneke and Todd Solondz, who tend to write such irredeemable characters making awful decisions and compounding things at every turn, but it’s compelling viewing that demands careful consideration and provokes a lot of sensations. Comics artists like Marjane Satrapi, Alison Bechdel, and Ralf König showed me you can convey a lot of honest emotion and nuanced autobiographical narratives through smutty and simplified pictures. In the last few years, I’ve read a lot of Alan Hollinghurst’s novels – he’s brilliant at bringing whole families and conversations and full evenings to life, without cutting away or collapsing time – I think that influenced the decision to stay in this one dark room and let things play out without flinching away.

Hopefully, I’ll learn to produce comics at a quicker pace and also enjoy it more. I used to write a lot in my 20s and it’s been great to rediscover that passion for fiction – this time, with a clearer understanding of what drives me to articulate emotional truth and lived experience, what I want to say, and how I want to say it.

This first one felt very pressured – there was a fear it might not get completed, I was constantly convinced I was going to mess it up somehow. Of course, I also wasn’t sure how it would be received or if anyone would care.

I’ll be approaching the next one with some confidence that I can do this, and that I have an audience.

I don’t try to appeal to a broad audience with anything I do – I create for myself and then seek out the people who like the same stuff. To my surprise, there has been more heterosexual take-up for this comic than anything I’ve ever done. I’ve sold the first 200-plus copies through my online store, so I know exactly who’s buying it!

It’s the fastest-selling thing I’ve ever put out and is on its way to being the biggest selling too, which was not what I predicted – I thought only the hardcore collectors would buy one thinking it was a new Pound Shop zine.

I did, however, keep in mind a lot of people would have no familiarity with the drugs and the culture depicted, and I tried to ground it in the cause and effect of actions rather than spell things out or have a surrogate audience member ask questions like “meth? What’s that?” The protagonist here isn’t naïve about chems, he’s been around the block.

I don’t know about demystifying, but depicting the scene frankly and writing a story that rang true without packing in every awful thing about chemsex was important. I wanted to write something that insiders and outsiders could follow and recognise themselves in. There are no heroes and villains here really, just people who need love and self-care.

The comics I really like are usually very specific, insular, mysteriously idiosyncratic or alienating – it’s often a much more isolated practise than say, making a film which is a huge team effort where a lot of money has to be recouped by appealing to a large audience. I like things that shut you out a bit, or make you work from the sidelines to try and understand. There’s no glossary of terms at the end – you can look it up.

Emotionally, I took inspiration from songs – they don’t pack in too many words, they don’t overstay their welcome, they establish a story through repetition and leave you to fill in the blanks with your imagination. And then they bounce around your head for the rest of your life.

After finishing the work and finally contacting a printer, I was suddenly hit by the realisation that perhaps nobody would be willing to print something that had 30 pages of hardcore nudity and drug abuse! I was really anxious about it right up until Comic Printing UK emailed me back saying they really liked it.

I was also wracked with remorse about drawing a character in the third story who looks a lot like me doing something that is also a lot like me. It was like I woke up in the middle of a sleepwalk down the motorway not knowing where I was or how I got there! But I decided that was a good sign – it meant I was putting out something that was intensely personal. If it doesn’t hurt to reveal it, it’s not true enough! This is just a working theory at the moment.

I know there’s a generally pessimistic atmosphere in these stories but, if you look closely, there’s tenderness and compassion, and survival. Hopefully people can relate to the humanity in my work, even without recognising the specific situations.

Having released this first volume, I’ve had a lot of contact from people who have been collecting my work for up to 10 years, who are suddenly revealing their own experience with these drugs and this type of situation, and I never would have guessed. Some horrific tales and a lot of regret or desire to stay away forever. Many feel forever changed – they now have to readjust to sex without this chemically-assisted rush of transgression and intoxication. There are probably lots of people who enjoy this activity without messing up their life, but they will have been in the same rooms and on the same sofas as lots of people who are disappearing down a slippery slope.

Section 28, the Conservative party’s scheme to codify queerphobic persecution into law, made sure generations of queer people like me spent their early years with no role models, no safe sex information, no path to a happy, healthy existence. This kind of story voices that howl of anger and disappointment in the system that let us down and also considers what happens when people are constantly identified as dangerous and taboo just for existing.

I have plenty more to say on this topic. I’m aiming to release a volume a year for the next few years and then pull it together as a single graphic novel.

I hope they enjoy reading something that’s openly sexual and unafraid to peer into the murkier corners of gay sex culture, but also I hope their understanding of the problematic complexity of chemsex is increased, and that they can find sympathy for people who are suffering, even though they may appear to be hedonists who don’t know when to stop.

The men in these stories are seeking something and also escaping something. I also had a desire to capture a time – growing up in the 90s in the shadow of AIDS and Section 28, and coming of age in the time of Gaydar and Grindr.

The UK is dismally afraid of talking about sex in general – the Trans Exclusionary Radical Feminist types currently flapping their gums about the imagined threat of trans people quite sharply illustrate our pathologisation of sex and gender issues and how that diminishes our compassion and acceptance. There is a trans male character in this volume but it’s just an introductory cameo at this point – I worked on a story about him over the summer which is likely to make it into Vol 2.

My interest is in writing about gay men right now, all the ugly, seductive, fascinating truth of them, the toxic masculinity and the beauty of transcending it.

This year, I’ve been listening to some excellent podcasts by trans artist-performers while I edit and colour – Transgressions by Sue Gives A Fuck and Margot Marshall is hilarious and brilliant, and Slurry by Olympia Bukkakkis and Oozing Gloop is my current obsession – really smart people enjoying very incisive discussions about gender and self-expression under capitalism. Probing critical thought like this, far from the world of my characters, brings my themes into sharper focus. It filters down into podcasts and memes and I absorb as much as I can.

The characters I’m writing keep making the same mistakes and have a lot to learn about empathy, and their capacity to grow and to be loved. If I didn’t care about them, I wouldn’t be able to write these bleak scenarios. If nobody tells these stories, nobody’s going to learn from them. 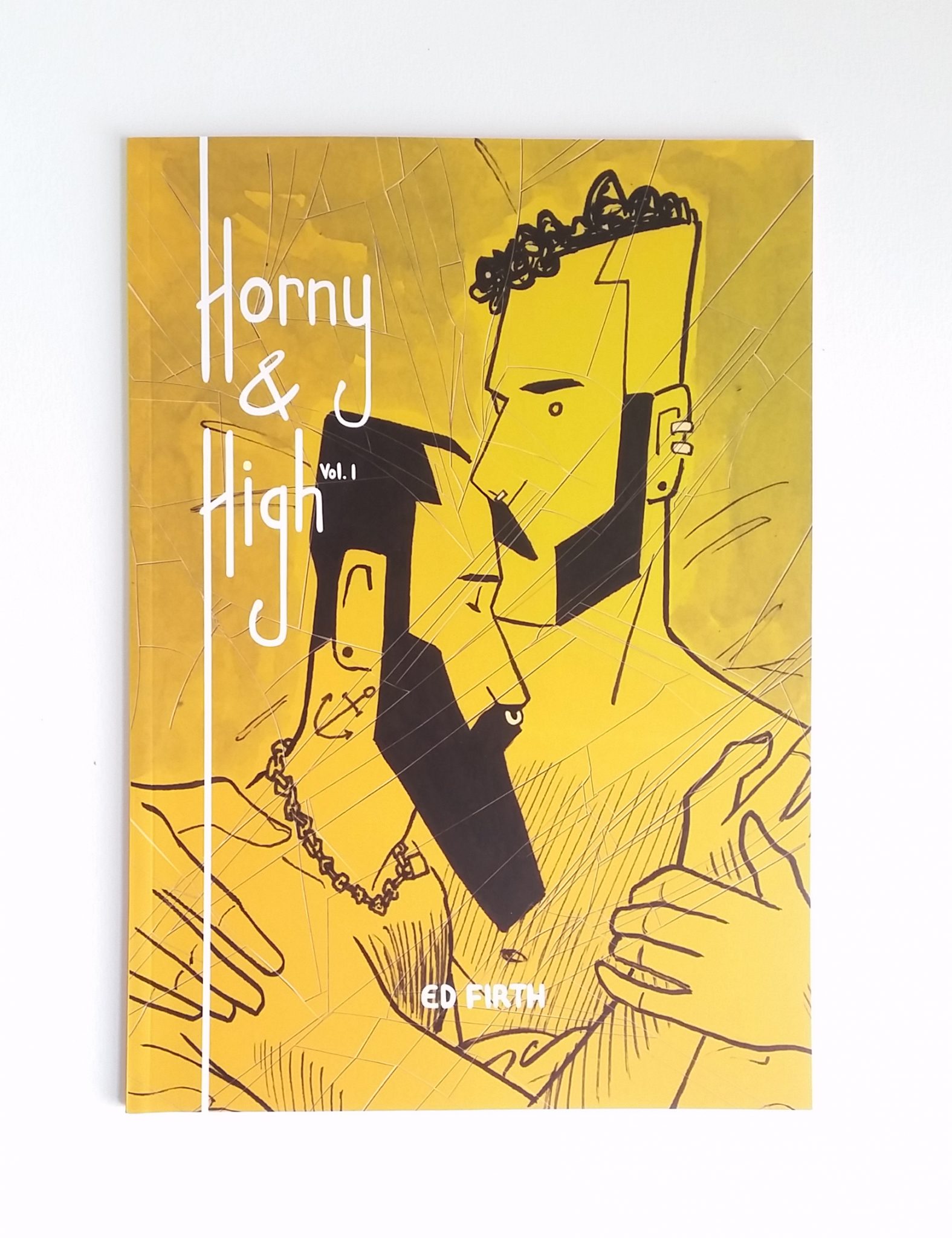 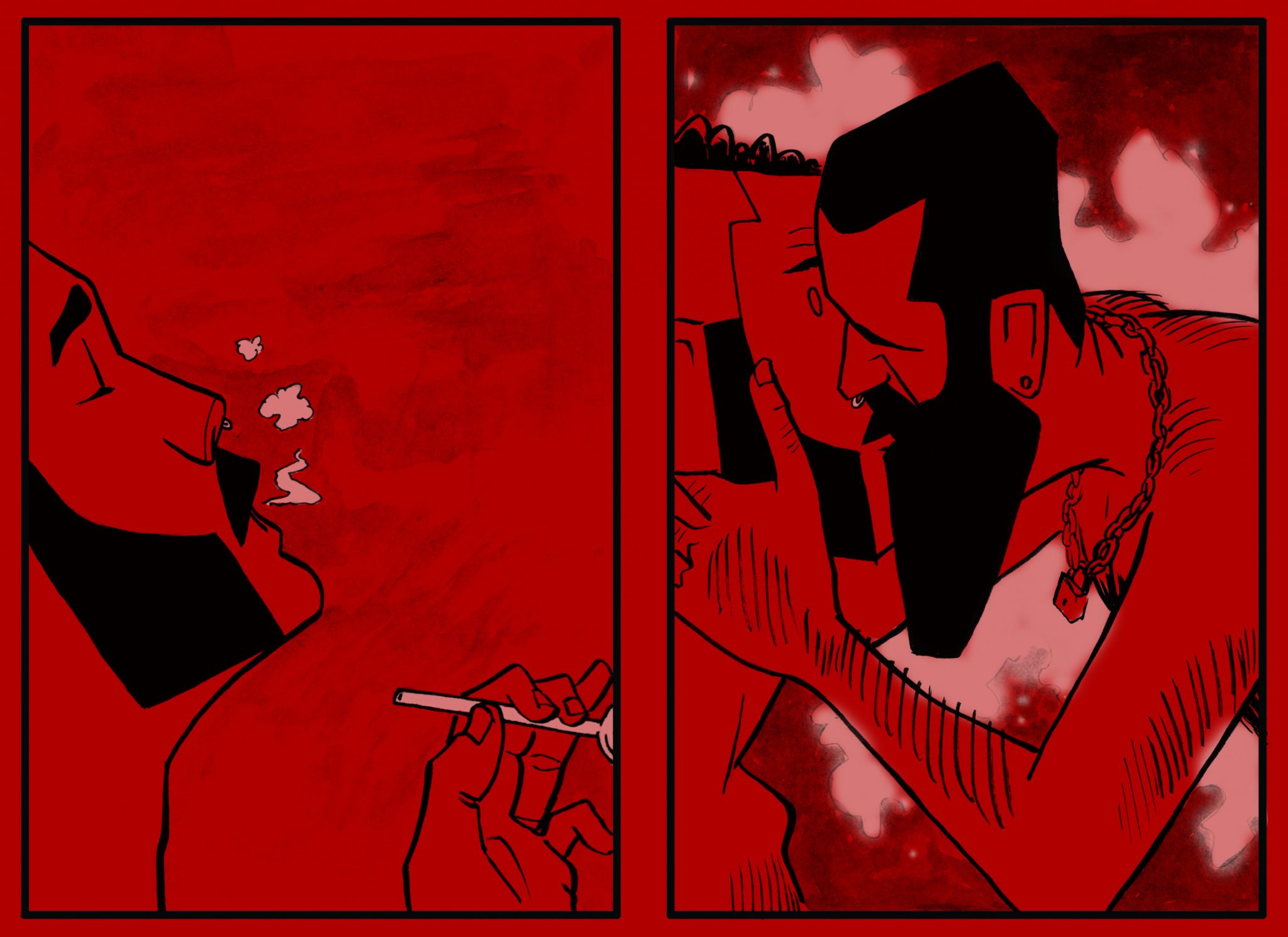 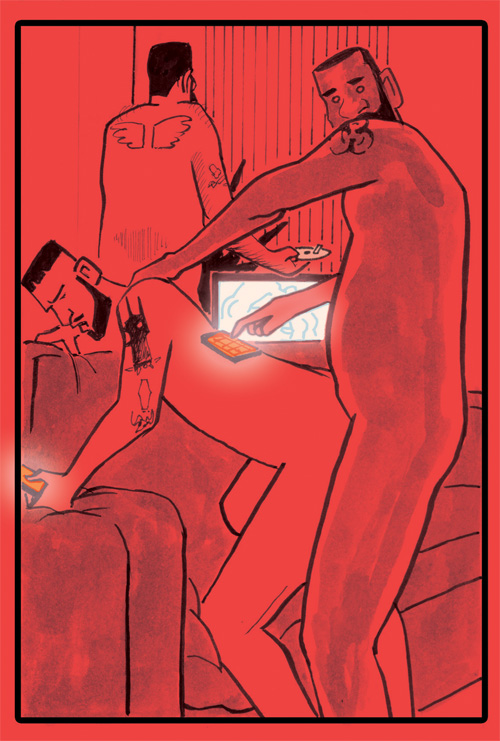 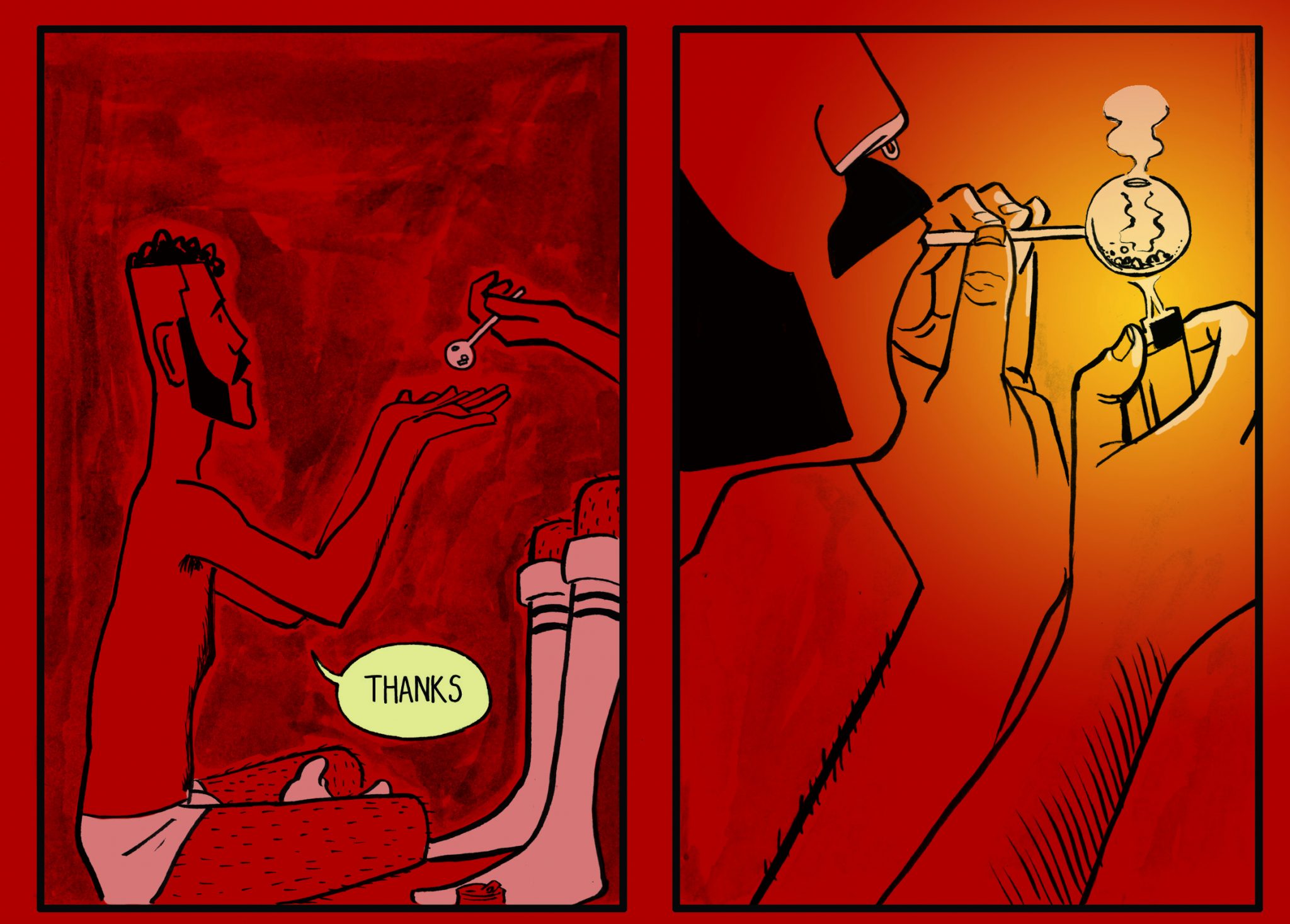 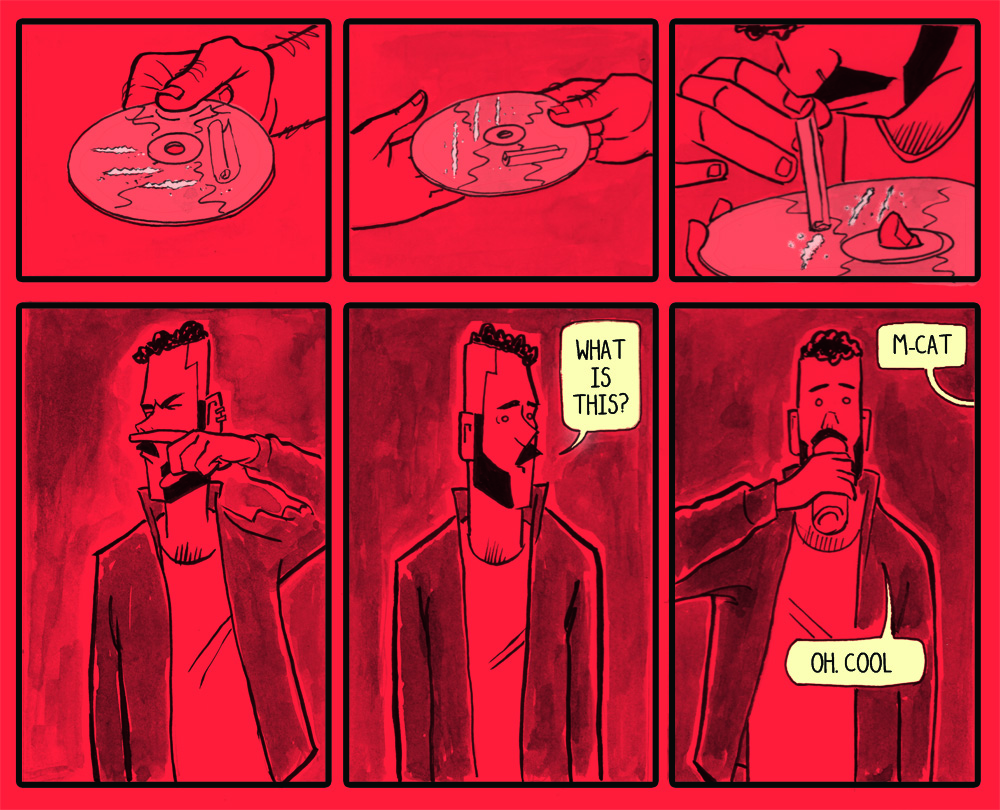 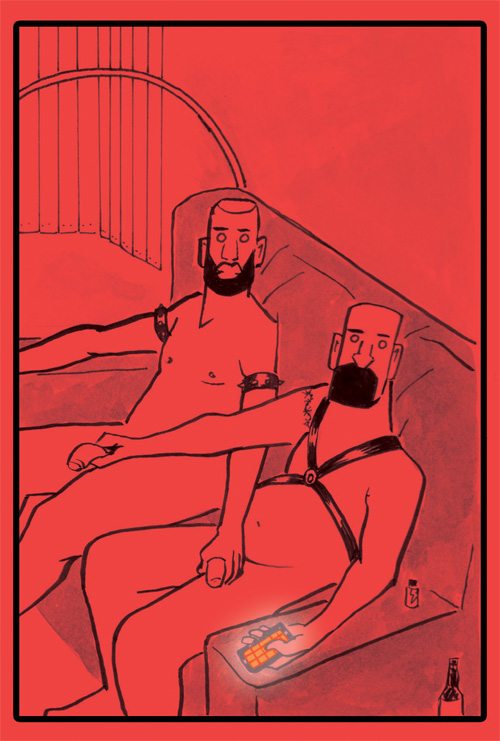 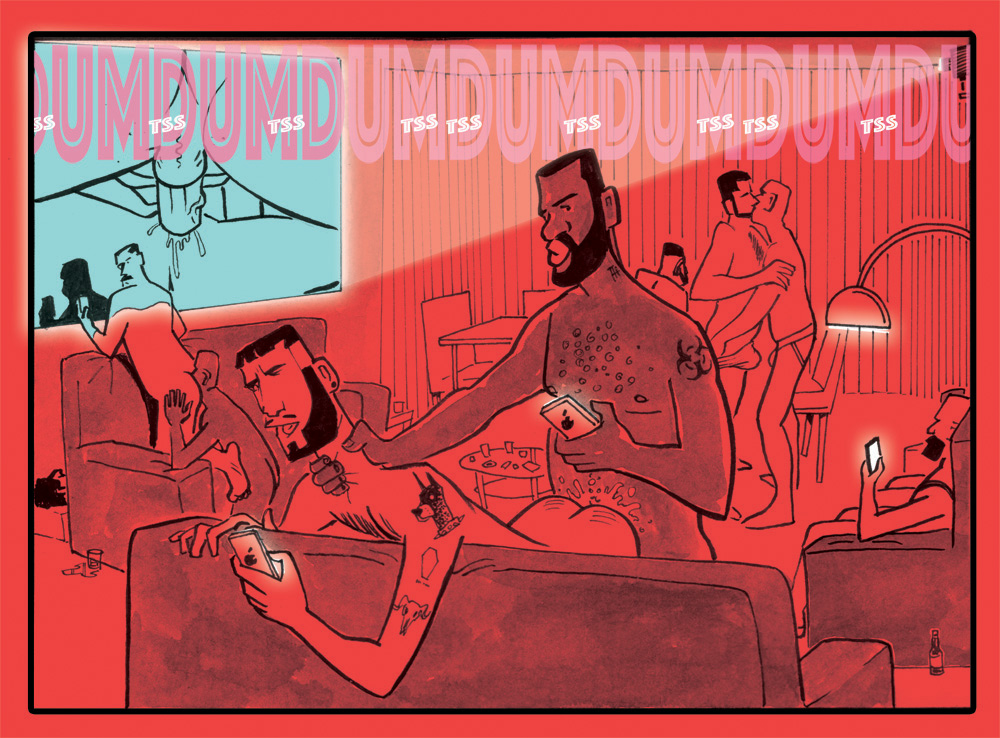 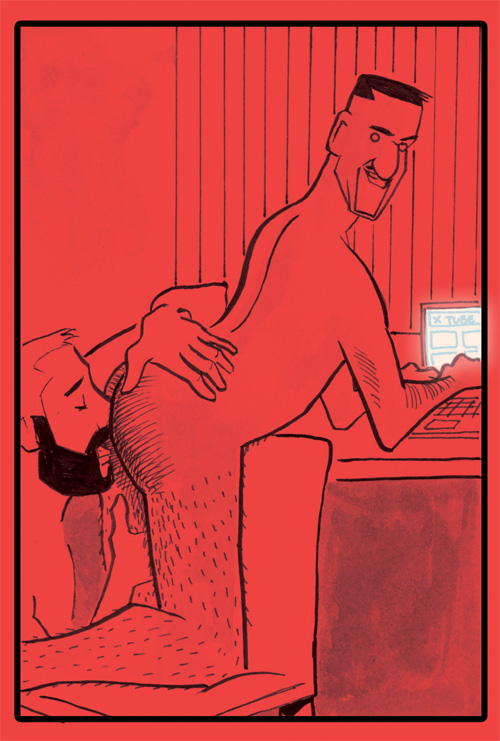 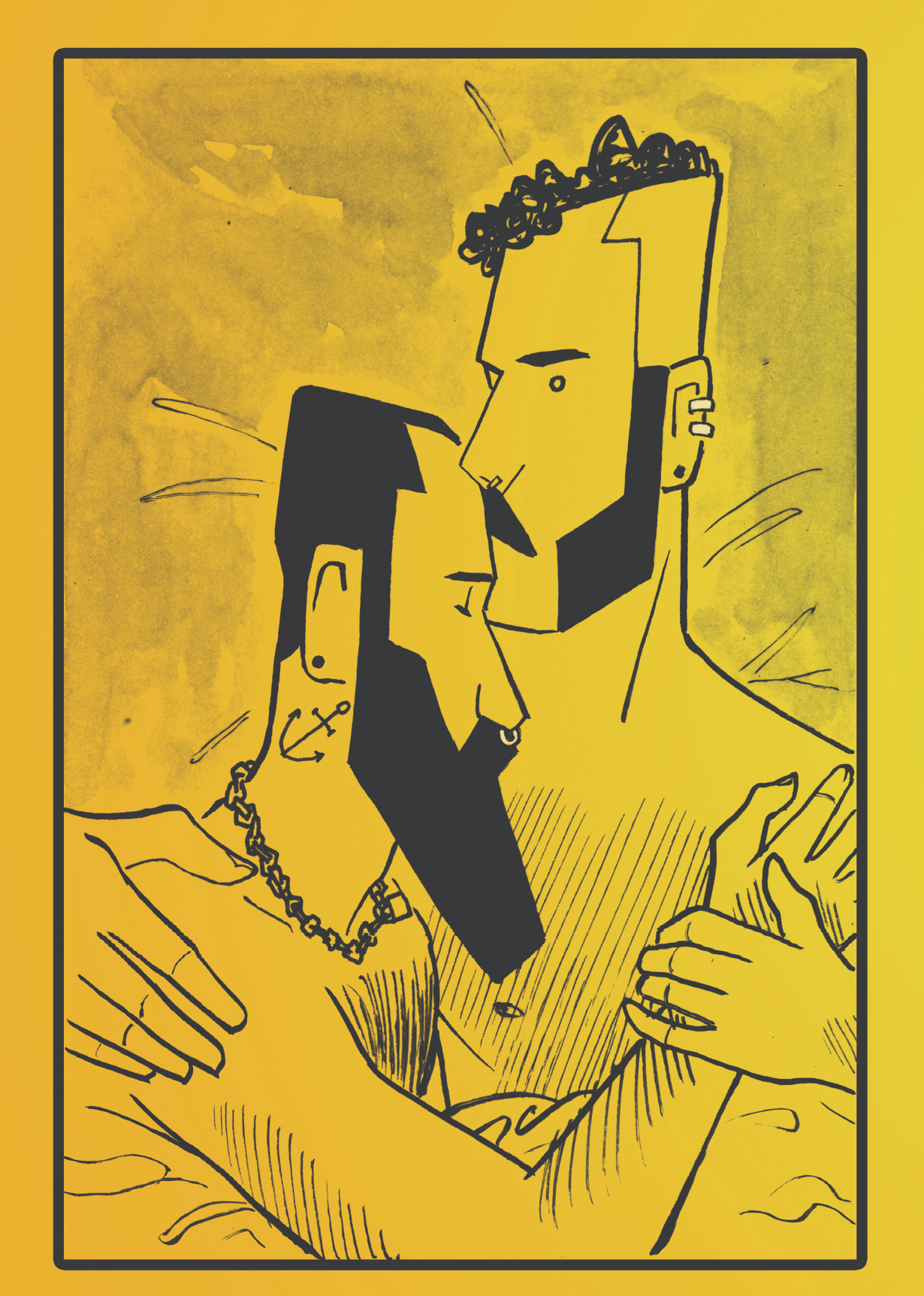