Take your sexting to the next level

For queer guys – and pretty much everyone else – dating apps are one of the key ways in which to connect with each other.

The starting point for a dating app interaction is your chat – there’s generally at least a few messages back and forth to establish a connection and ensure that you’re both on the same page.

With many of us stuck at home and unable to arrange face-to-face hook-ups, dating app chat has become even more important.

You may need to rely on your chat to fuel your fantasies and set up a few future dates for once we get past the current restrictions on movement.

Like anything, the more you practice your chat-game, the better you get at it. Here’s some hints and tips to help you #TakeItOnline and have some fun.

What are you looking for?

This is a question you’re probably going to get asked a lot, and it’s a good idea to ask yourself this ice-breaker before you even open the app.

Some days you might be looking for a quick hook-up, while others you might be more interested in meeting someone for a proper date, or the prospect of a longer-lasting relationship. You may be in a total lock-down situation and for now limited to a chat-only situation.

Knowing what you’re looking for will influence and shape the interactions that you have with other guys.

It’s always best to be upfront and honest when someone asks you what you’re looking for. If you just need a Mr-Right-Now, there’s no need to be coy about it. Giving a guy mixed signals or inaccurate intentions will only lead to confusion and misunderstandings later on.

The starting point is your profile photo. In London, most guys will show their face in their profile photo on a dating app. You don’t have to do that, but you’re less likely to meet guys that you’re into if you don’t. In other parts of the world, guys might have to be a bit more discreet. Take your lead from what everyone else is doing in your area.

Your profile photo is the first impression that guys on the apps are going to get of you. It should accurately represent you, but you also want to be putting your best foot forward. Make sure you’re bringing your A-game and some decent lighting to your profile photo.

Make sure you complete as many of the bio fields as you can. Be honest and authentic with the information that you include.

It’s okay to positively describe the kind of guys that you’re into, but don’t be offensive. Don’t be racist. Don’t fat-shame. Don’t femme-shame.

Try and let a bit of your personality show through, but there’s no need to overdo it. If you’re not sure what to write, check out a few of the profiles on the app that catch your eye and see if the style that they’ve used for their bio might work for you.

On the app, you can set some search fields so that you’re able to focus on the kind of guys that you’re looking for and the ones that are close by.

Don’t sit back and wait for guys to contact you. No matter how good your profile photo and bio is, there’s lots of reasons why you may not be appearing in the search results of the guys that you’re into. Be proactive.

Scroll through the guys in your area and send a quick message to anyone that you’d be interested in seeing more of.

Lots of guys will send a first message of something like “Hey”. There’s nothing wrong with that, it’s totally acceptable – it’s a low-risk way of seeing if someone is online and encouraging them to look at your profile. If they don’t respond, take the hint and move on.

Keep your tone light, upbeat, and fun. Be a bit cheeky. A bit sexy is good, but don’t be sleazy. You’re looking to build rapport, to see if there’s enough of a connection between you to start thinking about the logistics of meeting up.

Dating apps like Gaydar have a feature where you can upload additional photos to your profile, and you can keep these private or public. Additionally, when you start chatting with a guy on the app, they’re inevitably going to ask you to send some photos.

There’s two main reasons why guys will ask you to send photos. Firstly, it’s a way of checking that you are who you say you are. If you can’t send photos that confirm that you’re the guy in the profile pic, then that’s going to raise some red flags. Secondly, guys are going to ask you to send pics because they want to see you naked.

Should I send naked pics?

You’re under no obligation to send anyone naked photos of yourself. If someone is pressuring you to do that, and it’s making you feel uncomfortable or uncertain, then it’s probably best to end the conversation.

Whatever platform you’re using, once you send someone naked photos, it’s impossible to control what happens to them. It’s fairly common for private photos that you’ve sent as part of a hook-up conversation to somehow end up on the internet.

In some professions, having naked photos in the public domain – photos that could be seen as embarrassing or compromising – could negatively impact your career. It’s best to proceed with caution.

The reality is that some level of naked photos will often be required in order for you to seal the deal. One way to handle it is to send separate face and body shots – that way, if the photos go public your naked photos aren’t easily connected back to you.

What are the rules of sexting?

Sexting is just a combination of sex + texting, or sexy texting. It’s totally up to you how you go about it.

Some flirty or filthy texting or chat is a great way to get to know each other and to build up the anticipation of what’s going to go down when you get together. With the current uncertainty about lock-downs and travel restrictions, sexting might be an essential substitute for actually meeting up face-to-face.

The crucial thing for sexting is that you both need to be on the same page. There’s no point you sending sexy messages to someone if they’re not responding with the same kind of energy.

If you’re chatting with a guy on a dating app, your first few messages will generally give you a sense of how flirty or filthy things are going to get.

If things seems to be going well, and you want to turn the heat up a bit, be proactive. Make the suggestion or make it clear that you’re opening the door to take things further.

Another option is to ask him to tell you about his fantasies, or his hottest real-life experiences. Be prepared to match his descriptions with the same level of detail. This is not a time to be coy, but also you want to go too extreme unless it’s clear that you’re both in the same head-space.

If you’re in the middle of sexting exchange and he’s slow to respond or stops replying to your messages, don’t take it personally. Maybe he’s not alone or maybe he’s not somewhere where sexting is appropriate, or maybe he’s not as into the conversation as you first thought. Move on and shift your attention to someone else – right now, there’s plenty of horned-up guys with time by themselves and looking for ways to blow off steam.

Put your Gaydar to work

Means Happy is proud to be part of the Gaydar family. Gaydar are online dating specialists. It’s free to set up your account, and it’s easy to do.

Go on, get out there and have some fun! 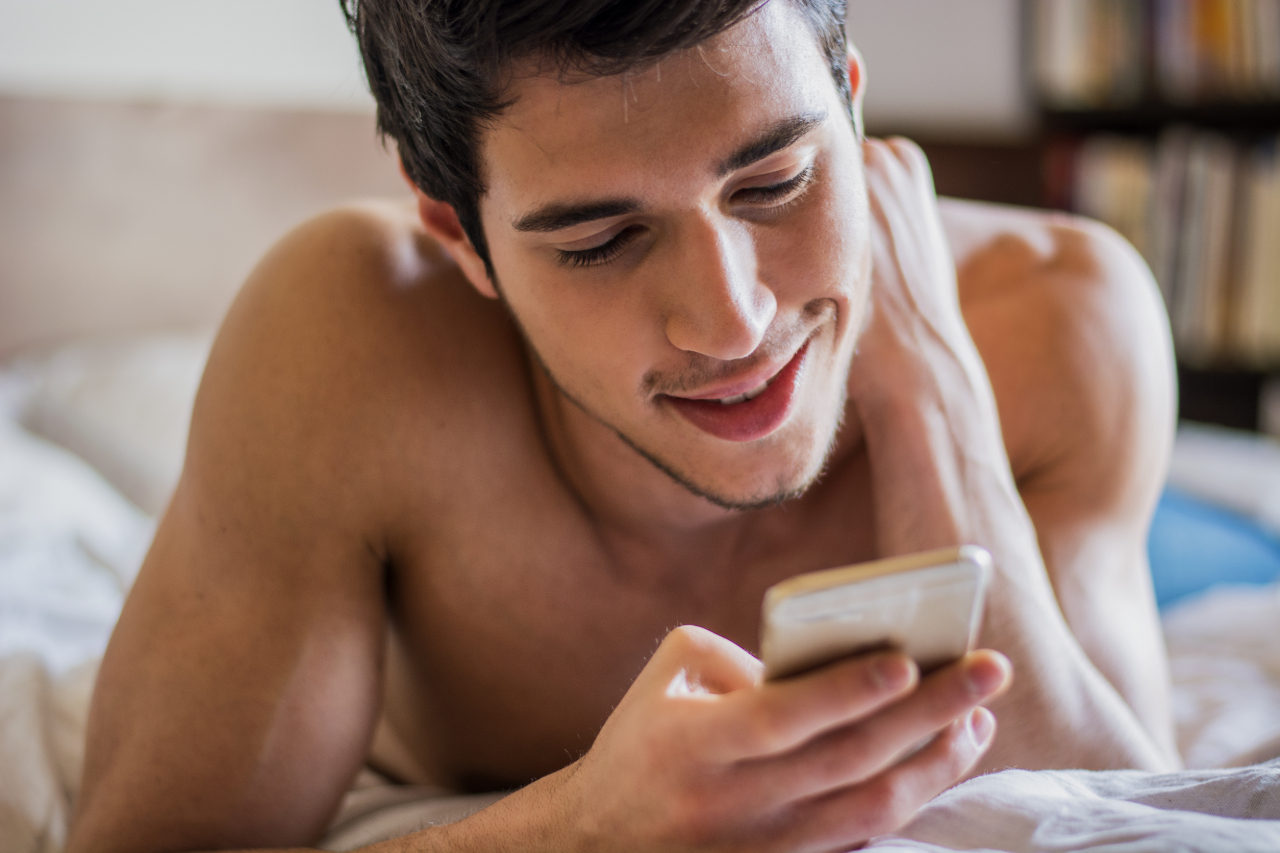 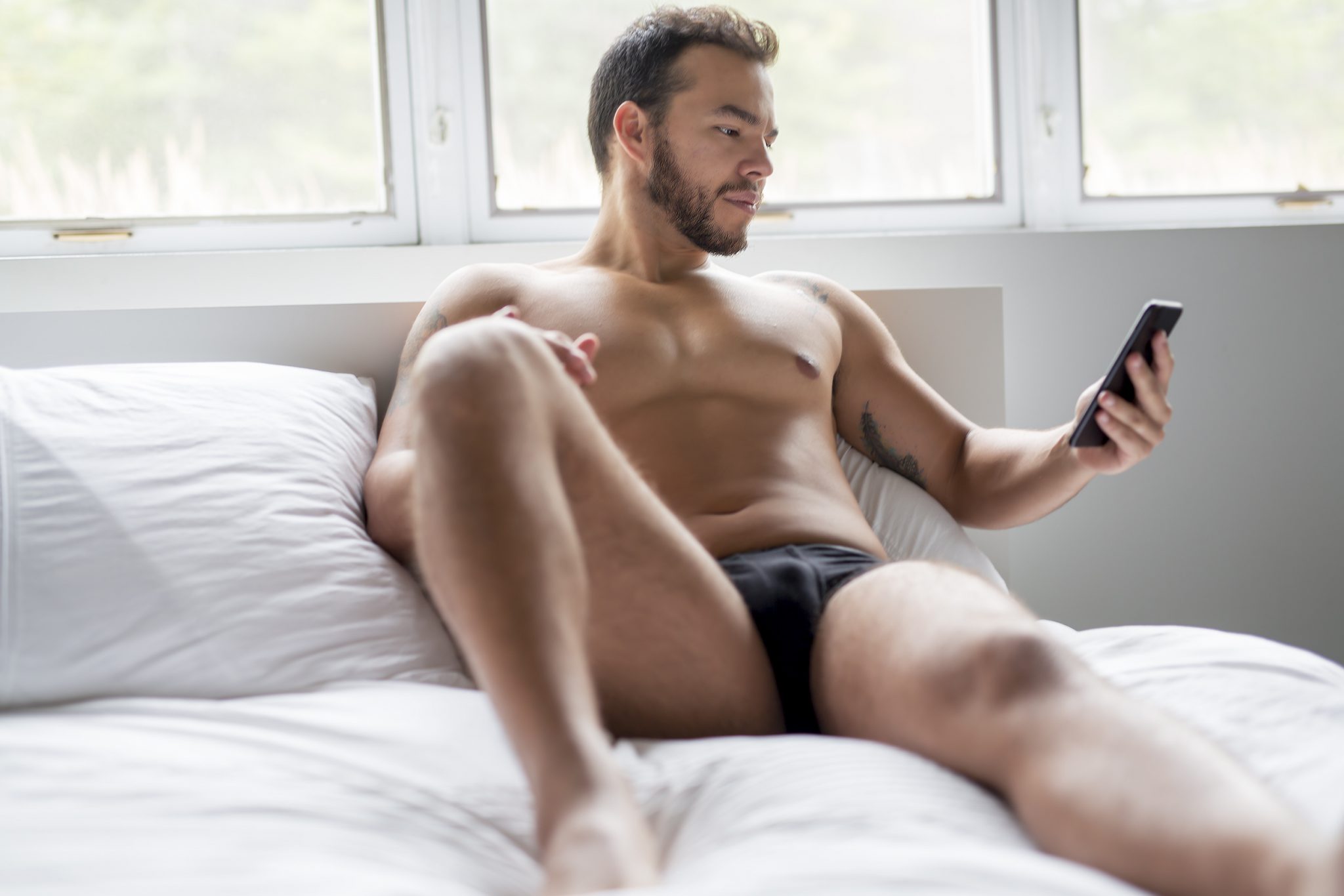 Thinking about starting a JustFor.Fans profile?

Tempted by a Twink Top?