Features
Home›Features›How queer were the 1920s?

The 1920s: Beyond the Roar is a new exhibition from the National Archives.

The experience-led exhibition enables visitors to explore and examine everyday life a century ago.

With the 1921 Census data for England and Wales as its starting point, the exhibition brings together a programme of events and activities, enabling visitors to explore day-to-day life in the 1920s through a series of urban encounters on a typical street from the time.

Key themes include politics and protest, women’s rights, empire and design. Excitement, social change and champagne-fuelled defiance marks this decade, sandwiched between two world wars, with a population recovering from the Spanish Flu pandemic. Polarising social issues and political demonstrations were grappled with as frequently as new fashion and rising hemlines.

The stories told through the exhibition will be thematically tied to buildings and places, including a newspaper stand, a polling station, a draper’s shop and a home. Objects on display include early Chanel dress fabrics and geometric patterns beside more traditional chintzes and paisleys – women’s clothes operated as a barometer of change and family photos illuminate how a new concern for public health and morality impacted many aspects of domestic life.

Alongside records as diverse as international peace treaties, textile samples and lonely heart ads, the census of 1921 stands as a historic document itself that brought the roar to a still and sealed it as a permanent record. Other evidentiary highlights include police reports to the Home Office on the Liverpool Race Riots of 1919, The Equal Franchise Act of 1928, and a draft of the new elector registration form adding female pronouns.

A reimagining of infamous Soho nightclub, The 43 club, concludes the visitor’s experience. The design of this space draws on reports from police raids to tell the stories of the venue owned by Kate Meyrick. Iconic design features of the era – including patterns, furniture and lighting – bring a dance-floor, bar, and seating area to life. Real stories are evidenced by historic documents that draw out glitzy and gritty accounts of The 43 and its staff and clientele, who ranged from film stars and gangsters to Italian waiters and East End dancing instructors. This space acts as a microcosm that concludes Beyond the Roar by presenting the earlier themes from a different perspective and within a vibrant, social atmosphere.

Connecting people of the 1920s with audiences of the 2020s, the programme explores 1920s Britain and the stories of individuals learning to live after the trauma of a world war, suffering and surviving through a global pandemic and embarking on a new era where everyday rights and roles were changing.

In an era when the law criminalised same-sex sexual encounters, how did queer people find each other and connect?

The Beyond the Roar exhibition provides some insights.

One example was a publication called The Link. This was effectively a lonely-hearts publication that was founded by Alfred Barrett in 1915. 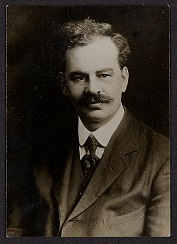 Barrett was a journalist and editor, who had published a great number of books in his earlier life under the pseudonym ‘R Andom’. But in 1915 Barrett was one of the first to publish a magazine entirely devoted to lonely hearts advertising. These adverts didn’t just fill a few pages at the back of the magazine – they provided its entire content.

The Link described itself as ‘not matrimonial’, differentiating it from competitors and companion volumes of the era. Barrett claimed the publication could be used by people seeking companionship. Others, however, believed it would facilitate more casual sexual encounters. While the personal advert was not a new concept, this tone was. By explicitly defining itself as looking beyond marital love, it pushed the boundaries and social norms of the era. 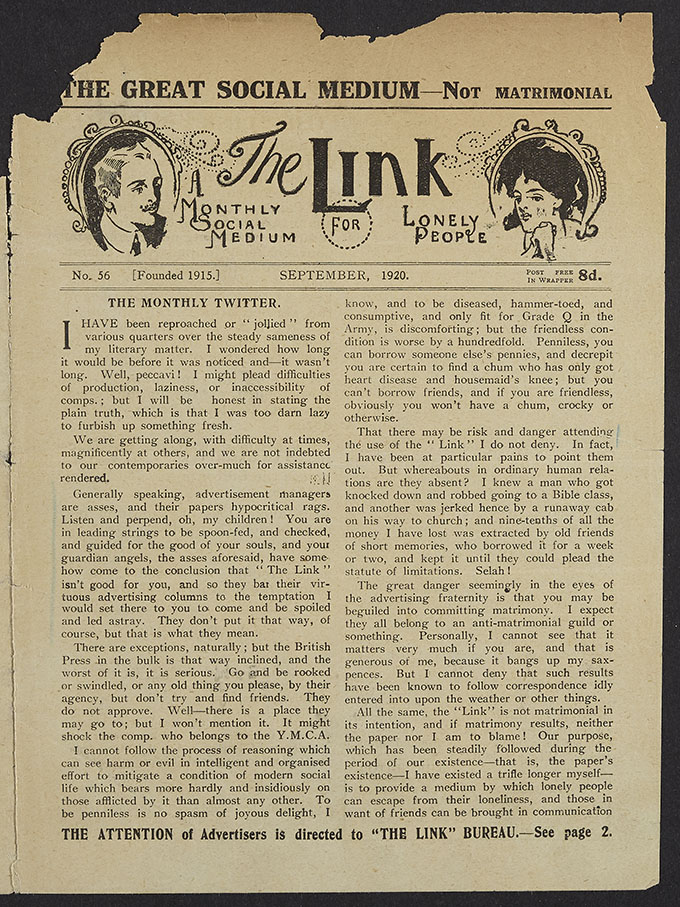 The adverts were divided into three major sections of personals: Ladies, Civilians, and Soldiers and Sailors. There were adverts by war widows, disabled soldiers and people searching for less formal relationships, reflecting the changing society and social values of the 1920s.

People had up to 25 words to describe themselves and what they were seeking.

Here are some examples taken from the pages of The Link:

However, the publication wasn’t used entirely as Barrett had planned. Through these pages, men used the coded and suggestive language of classified adverts to meet other men. This was extremely risky, as in 1920s Britain homosexual acts between men were criminalised. It was never illegal to be gay, but many of the associated practices were criminalised.

A letter from R A Bennett, editor of the moralistic newspaper Truth, had highlighted the publication to the Metropolitan Police. A copy of The Link was sent to them, with pencil markings carefully underlining certain sections and key words. The Link was ultimately investigated for conspiracy to corrupt public morals.

“The portion devoted to the ladies is frank enough, but that is a mere question of ethics…” wrote Bennett. “What I am concerned about, and what leads me to write to you, is the section devoted to the male sex, where the advertisers seem to be running up against the criminal law.” Bennett goes on to say that these sections – in which men are advertising for male companions – “speak for themselves as plainly as such an advertisement could.” 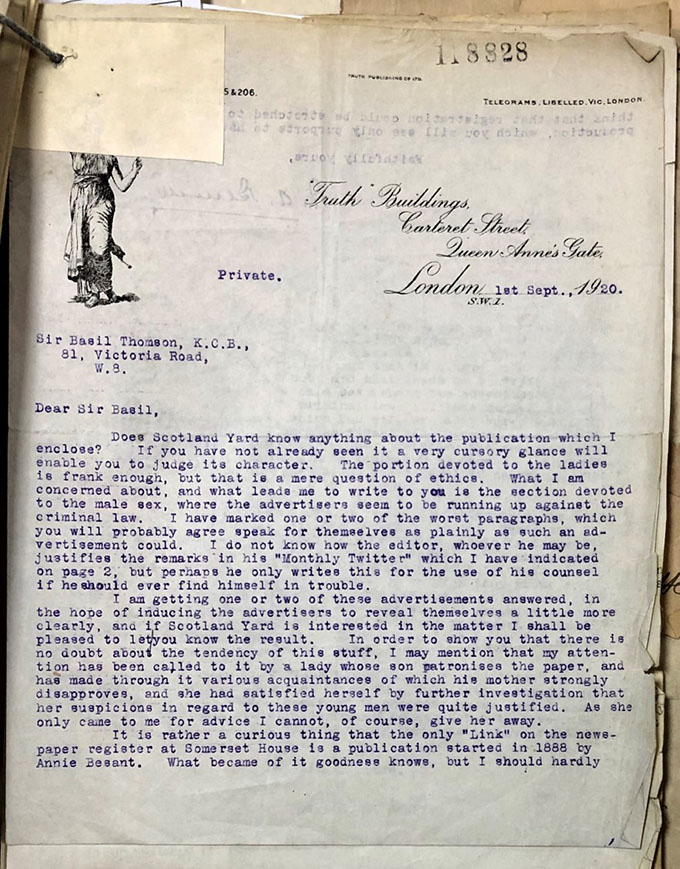 Men meeting other men can be inferred from some of the coded language of this publication: ‘artistic’, ‘bohemian’ and ‘unconventional’. Concerns were also highlighted about advertisements that seemed to suggest an element of payment or just ‘loose’ morals. 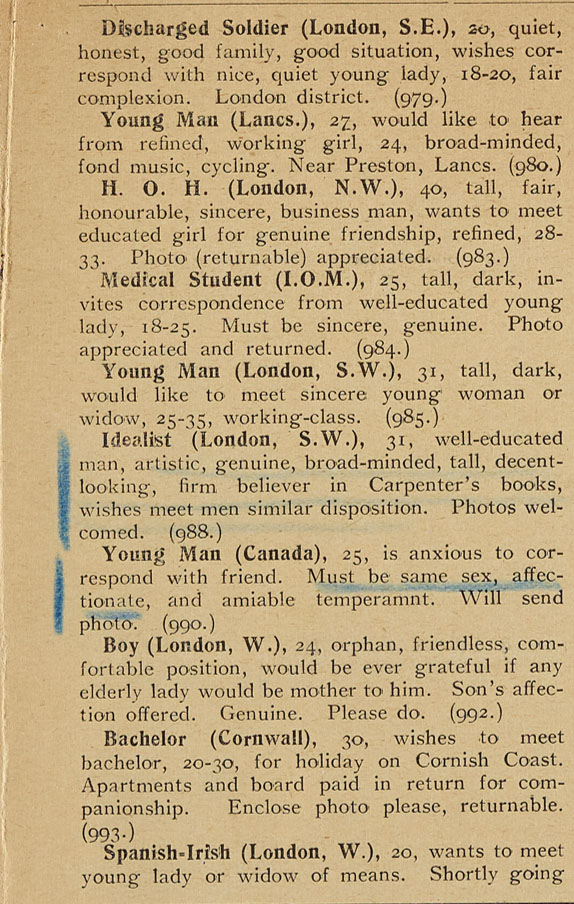 In the decades after this, other hidden modes of communication would develop in the LGBTQ community – such as the language of Polari. But the descriptions used in The Link give us some insight into how this terminology and sense of identity was evolving and emerging.

While use of words such as ‘artistic’, ‘musical’, and ‘unconventional’ may seem subtle, they were coded references that everyone – including the police – were well aware of. Another approach was to list specific artists and literary figures – Oscar Wilde was an obvious choice, but other references included Edward Carpenter and Walt Whitman.

Find out more about The 1920s: Beyond the Roar – opening 21 January

3 LGBTQ+ Memoirs You Should Read

A Very Sunny Christmas is exactly the ...