Immerse yourself in a world of endless narcotics and queer narratives with Justin David’s latest book, The Pharmacist. Published by queer publishing house Ikandescent, The Pharmacist is a novel that tells the story of Billy.

Billy is 24, he’s beautiful and sexy. After a chance meeting in the heart of the London’s East End, Billy is seduced into the sphere of Albert – a compelling but damaged older man. An unconventional friendship develops, fuelled by Albert’s queer narratives and an endless supply of narcotics.

I caught up with Justin David for a behind-the-scenes look at the book.

Most of my adult life has been spent living in East London. Through the process of gentrification – and eventually corporatisation – the area where the book is set was changing dramatically. Squats and old warehouses where artists lived and worked were knocked down or turned into luxury flats. Independent businesses got taken over by the big guys. This loss was felt heavily by the LGBTQ community, as our spaces began to vanish. Though I probably wasn’t conscious of it at the time, it’s clear to me now that I was chronicling that period before that phenomenon took hold and ripped out East London’s soul.

It’s really hard to pin-point a single inspiration for the characters, Billy and Albert. I knew I wanted to write about a very potent, obsessive friendship. You know those connections that are so strong you want to spend every waking moment with your new friend or lover, show them every aspect of yourself, share everything? That’s what I wanted to write about – a dynamic that was both formative and transformational.

In the case of the book, that energy is also destructive. During my clubbing days on the gay scene, I’d seen more than just a couple of close friends fall foul of hedonistic thrill-seeking. I knew I wanted to combine some of the enabling aspects of an obsessional friendship with addiction. To demonstrate that this chemistry felt no boundaries, I made Billy and Albert distant in age and sexually attracted to each other. These were just some of the conscious decisions I made but it’s also true to say that I really don’t remember sitting down and creating those characters. At the risk of sounding wanky, they just came along and started to live with me.

This story has been published previously in other formats, why was this the right time to publish The Pharmacist in paperback and a Kindle version?

The Pharmacist was originally published by Salt as part of their digital Modern Dreams series. Salt is headed by Chris and Jen Hamilton-Emery who were, and still are, incredibly supportive. They are one of the best independent presses in the country. Support their work – buy some books.

After its first outing, I got the rights back from Salt as I wanted to include the story in my book of collected fiction, He’s Done Ever So Well for Himself. Though it was buried in amongst the other stories and, as a very sexy homoerotic bildungsroman, I knew it hadn’t yet reached it’s target audience. So, new paperback, new sexy cover.

Does this story fit somewhere within the Chemsex narrative of the experience of gay men in London?

Yes, definitely. There’s nothing new about writing about sex and drugs but gentrification really changed the landscape of gay sex for many. The loss of those safe spaces and the advent of hook-up apps and smartphone technology created a
perfect storm.

By the end of the book, crystal meth has just started to make its way onto the scene. I really feel that The Pharmacist ends where ChemSex really took off.

You describe this story as homoerotic Bildungsroman – a coming-of-age. How closely does your coming-of-age experience mirror that of Billy in The Pharmacist?

Well, we’re both gay, we both love sex and we’re both artists. Most of us reaching adulthood in the early nineties had experienced a lot of homophobia and the closet was still deep. We’d waited a long time to experience our first love affairs, while our straight friends had exhausted all that puppy love as teenagers. And of course, there was guilt and there was shame. It’s not hard to see why, then and now, guys felt the need to escape into partying. However, I think Billy, perhaps emboldened by the drugs, threw himself into that situation. I was cautious and overthought everything too much to find myself in that situation.

The general understanding of ‘coming-of-age’ is that it is a loss of innocence, the moment of passing from youth to adulthood. These moments can happen at any time in our life. Albert experiences quite a potent coming of age moment himself.

What do you hope that people feel when reading The Pharmacist?

Movement. A stirring in the brains and in the underpants.

The Pharmacist is available from Amazon, Gay’s the Word and www.inkandescent.co.uk

The cover art for The Pharmacist has been created by Justin David, featuring model Scott Humphreys. 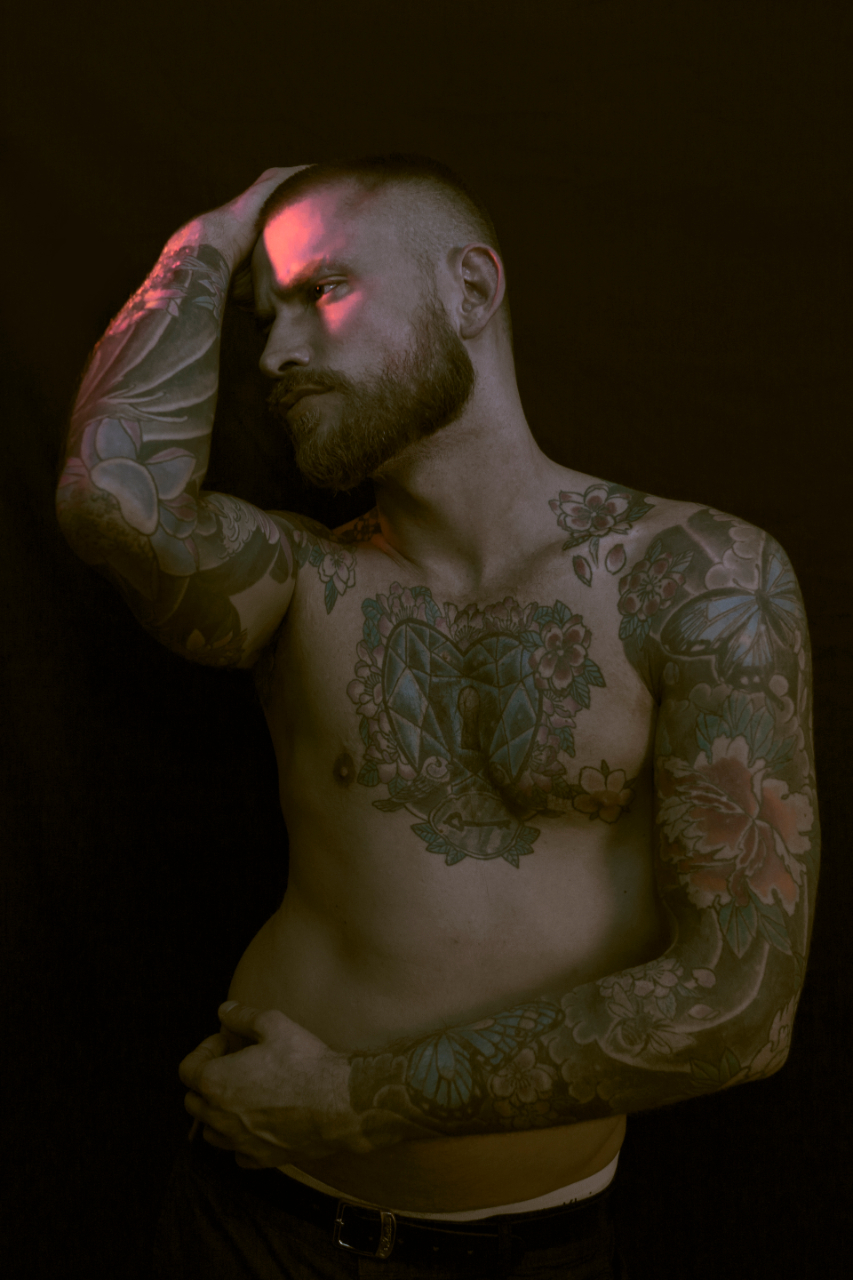 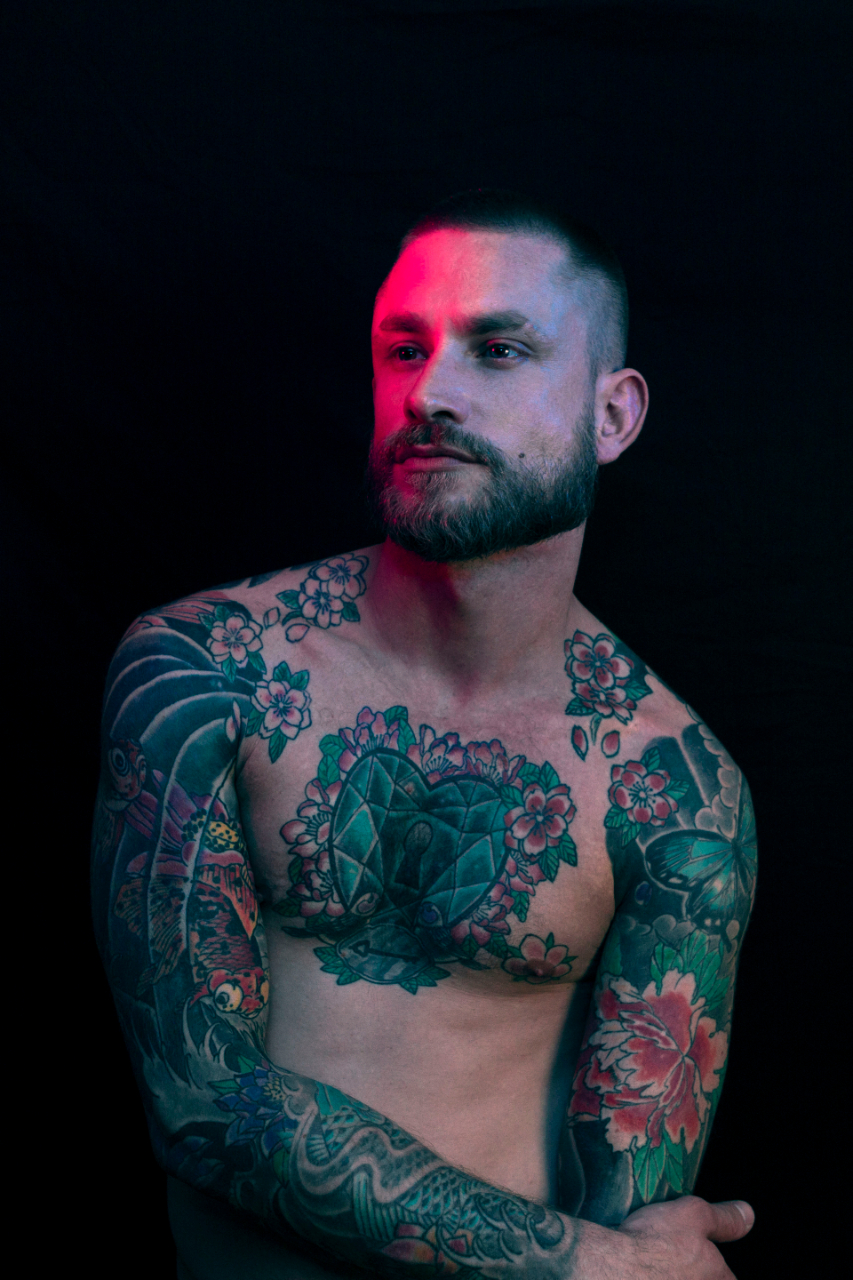 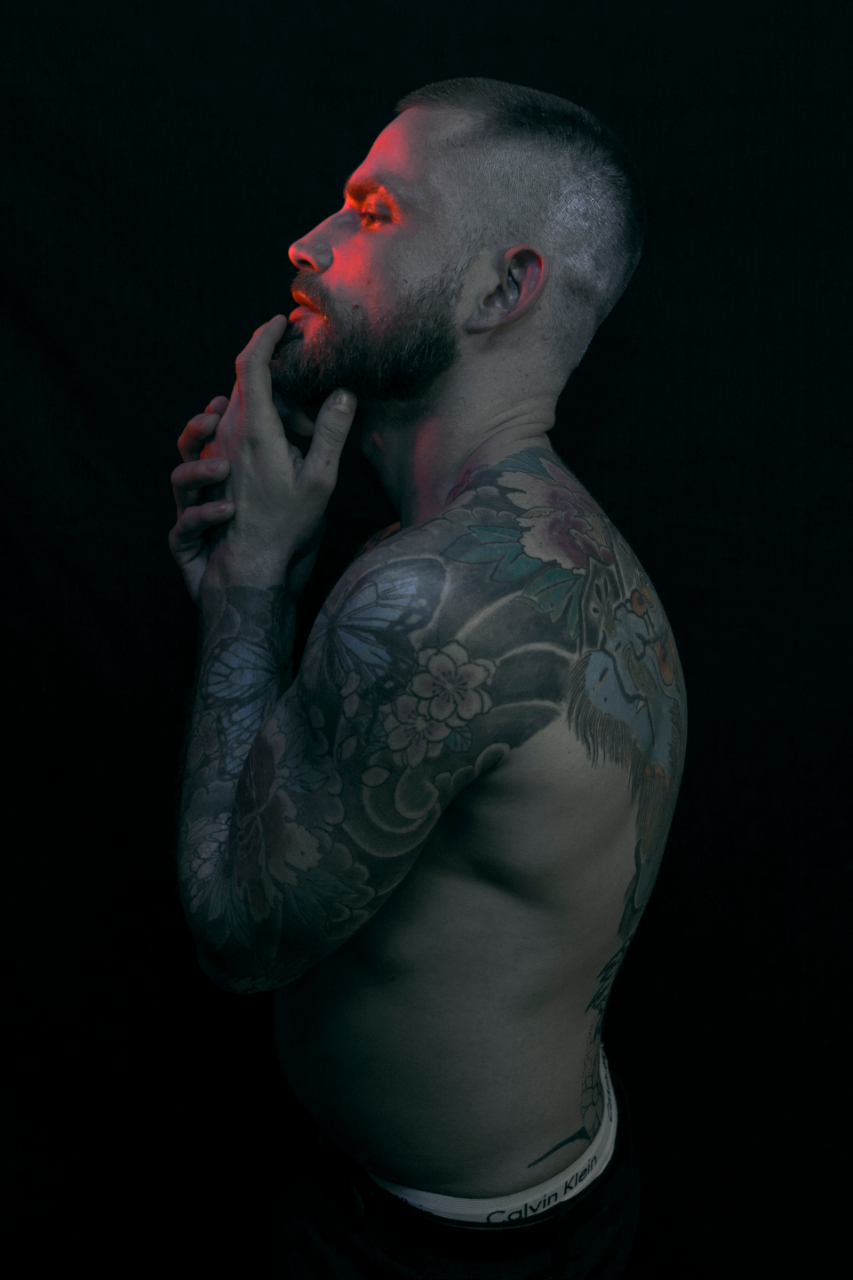 As well as his writing, Justin David is also one of the men behind publishing house Inkandescent Publishing. I spoke with him recently for a behind-the-scenes look at his life in publishing.

When did you start to explore a career in publishing?

It wasn’t something I planned. It just happened organically. My partner, Nathan, is a director of film and theatre, and poet. I’m a writer of fiction and a photographer. We’d grown disillusioned about the art and publishing worlds. The bookshops were full of classics, celebrity biographies, prize-winners and paperbacks. Publishers just didn’t seem to be taking risks on anything that might not appeal to a very wide audience.

We just didn’t make the kind of work that publishers and producers could make mega-bucks from. We were too queer, too working-class, not working-class enough. It seemed that you had to be both an Oxbridge graduate and the daughter or son of somebody before you could get over the drawbridge.

To be fair, there are some amazing independent publishers in this country who are really giving talented diverse writers a chance. Of the big corporates, Penguin are making all the right steps with their initiative to find underrepresented voices. I’m thrilled to see things changing.

In 2015 we’d decided that we just wanted to make one piece of work which didn’t require the permission of a gatekeeper. Call it a vanity project if you like, but we won an Arts Council grant to produce and publish a book of our own – Threads.

We didn’t want all that knowledge to go to waste. We decided to publish more books and build a platform to champion the underrepresented ideas, subjects and voices of others. Inkandescent was born.

What gave you the confidence to make that move into independent publishing?

My first degree was in graphic communication – I’m used to designing for printed matter. I also have a long history in photography, so book covers didn’t scare me. My masters in creative writing meant that I had certain skills required for manuscript editing. However, we’re doing everything in-house and there are gaps in our knowledge and experience. Setting up has been like being back at art school  -  a very steep learning curve. Every day is something new.

We’re extremely ambitious. I talk about Inkandescent everywhere I go, and I’ve been determined to find all the people who can help. Many people have seen the value in what we’re doing and want to come aboard the magic carpet and be part of the journey.

Was the reality of running a publishing house what you were expecting?

It’s every bit as hard as I thought it would be. We’ve made mistakes. But you have to keep going. At first, it really did feel a bit like we were on our own. But we found other people in the industry who had expertise that we don’t. The generosity of people has been overwhelming.

What are some of the challenges of working in the publishing industry?

Funding is the main issue. When you’re starting on a shoestring, it’s difficult to make your voice heard. It’s a chicken and egg situation. In order to sell books, you need publicity, but you need to be selling books to make the money to pay for the publicity. So, the first year or so has been baby steps. We’re now starting to hold our own. More people know about us, and our brand is becoming galvanised.

Is there still a demand for books written for an LGBTQ audience?

I absolutely believe that there is. There have been some wonderful LGBTQ books that have gained great acclaim in recent years , which goes to show that not only LGBTQ people read books by LGBTQ authors.

However, the desire of the big publishers to make a lot of money has led to a lot of homogeneity in what they put out. I feel this opens up a great opportunity for smaller publishers to be more daring and experimental. LGBTQ people want to see their own lives and experiences reflected back at them in the books they read. It’s incredibly life-affirming to read characters and stories that make you feel understood, that help you to feel you’re not crawling across the globe all on your own.

Though we’re not exclusively an LGBTQ publisher, I’d definitely like us to become a go-to place for LGBTQ people to visit and discover their reading material.

What are some of the skills and attributes that you need to build a successful career in publishing?

An elephant hide might help. It’s not for the faint-hearted or those without patience. The landscape is constantly changing. One minute real books are out and digital paper is in. Next audiobooks are de rigeur. I have neither a thick skin or any patience. But wine helps.

If someone was considering a career in publishing, what advice or guidance would you give them?

Be a dog with a bone. Be resilient. But be gracious. I literally pester people  –  in a nice way  –  until they relent, but there is a limit. Everyone is busy.

Talk to everyone you know about what you’re doing. If you don’t have the money or connections that make it possible, then find the people who do. The internet will help you. Some people won’t be willing to help. But if you show people that you believe in your project and that you’re doing something worthwhile, they will want you to succeed. Start small. Work with the people around you. Build a community.

You will find the people who will open the doors for you. But it must be for love. Seriously, there are easier things in life. If books are not the thing that make your soul sing, do something else. 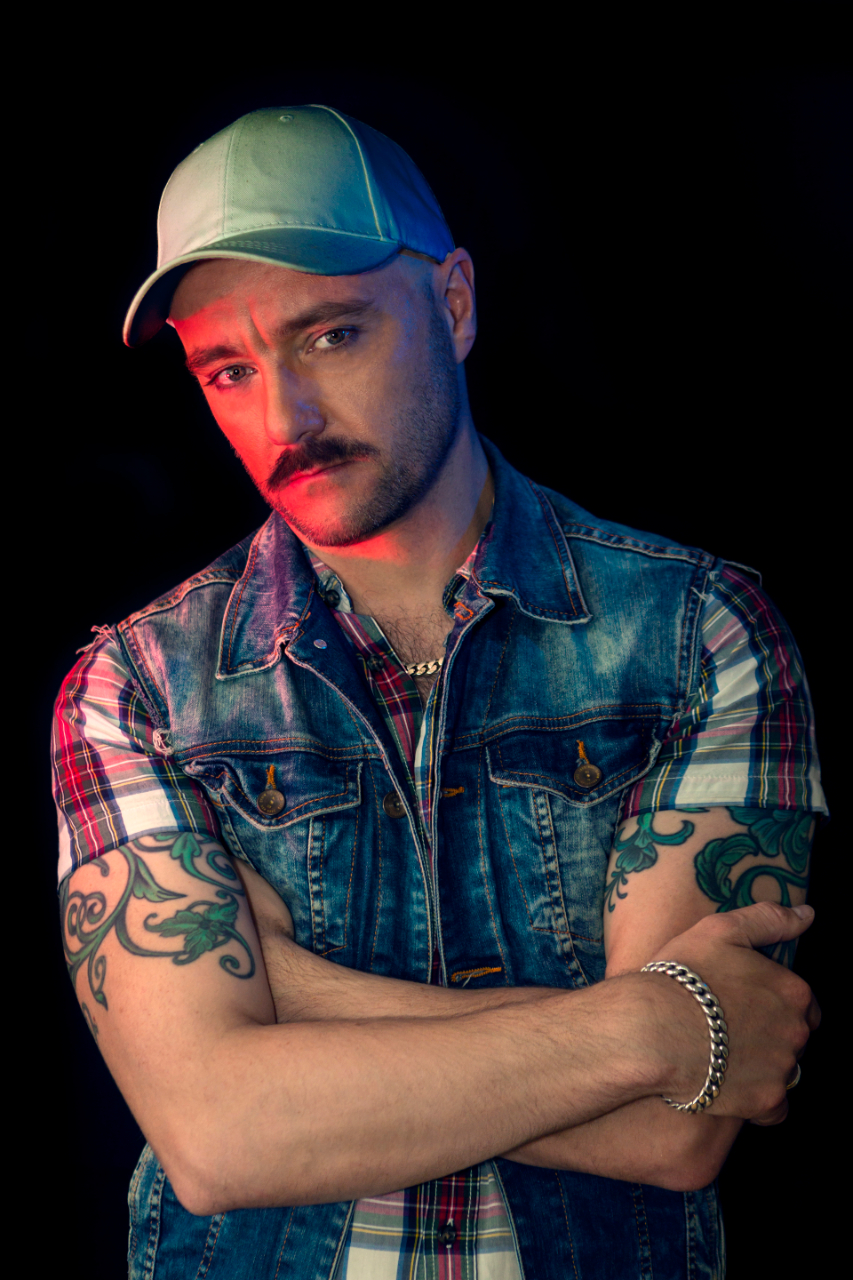 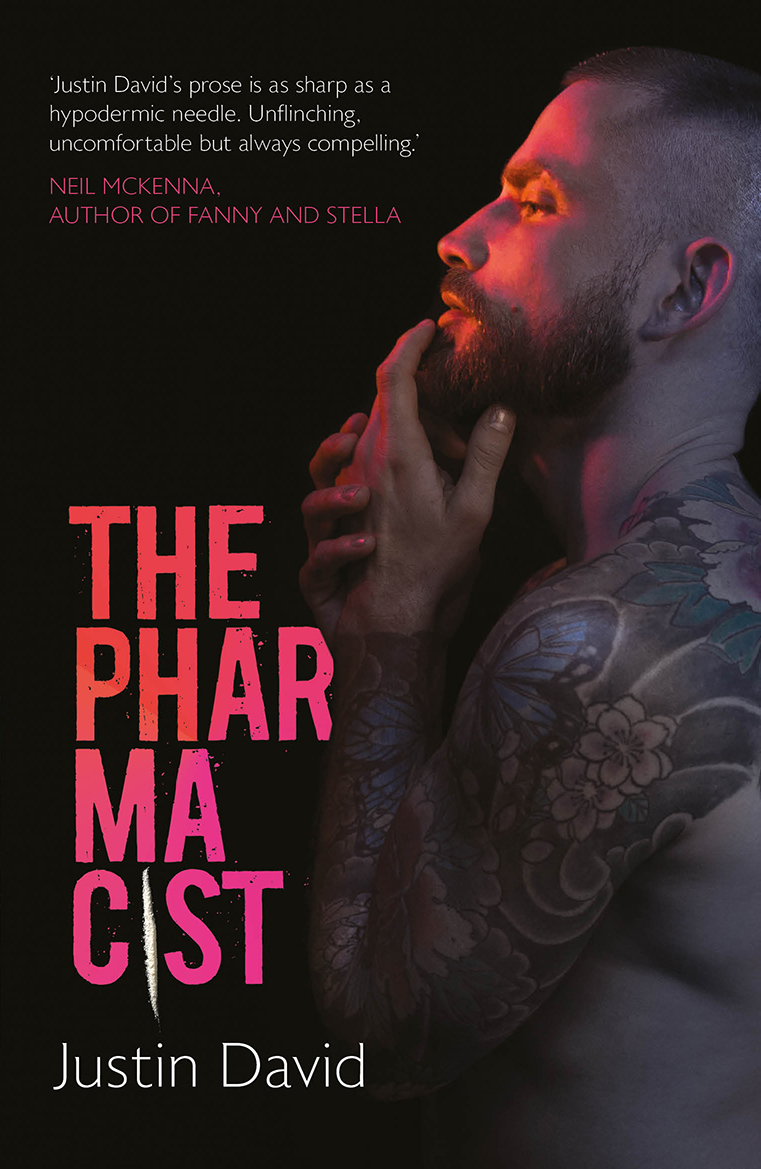 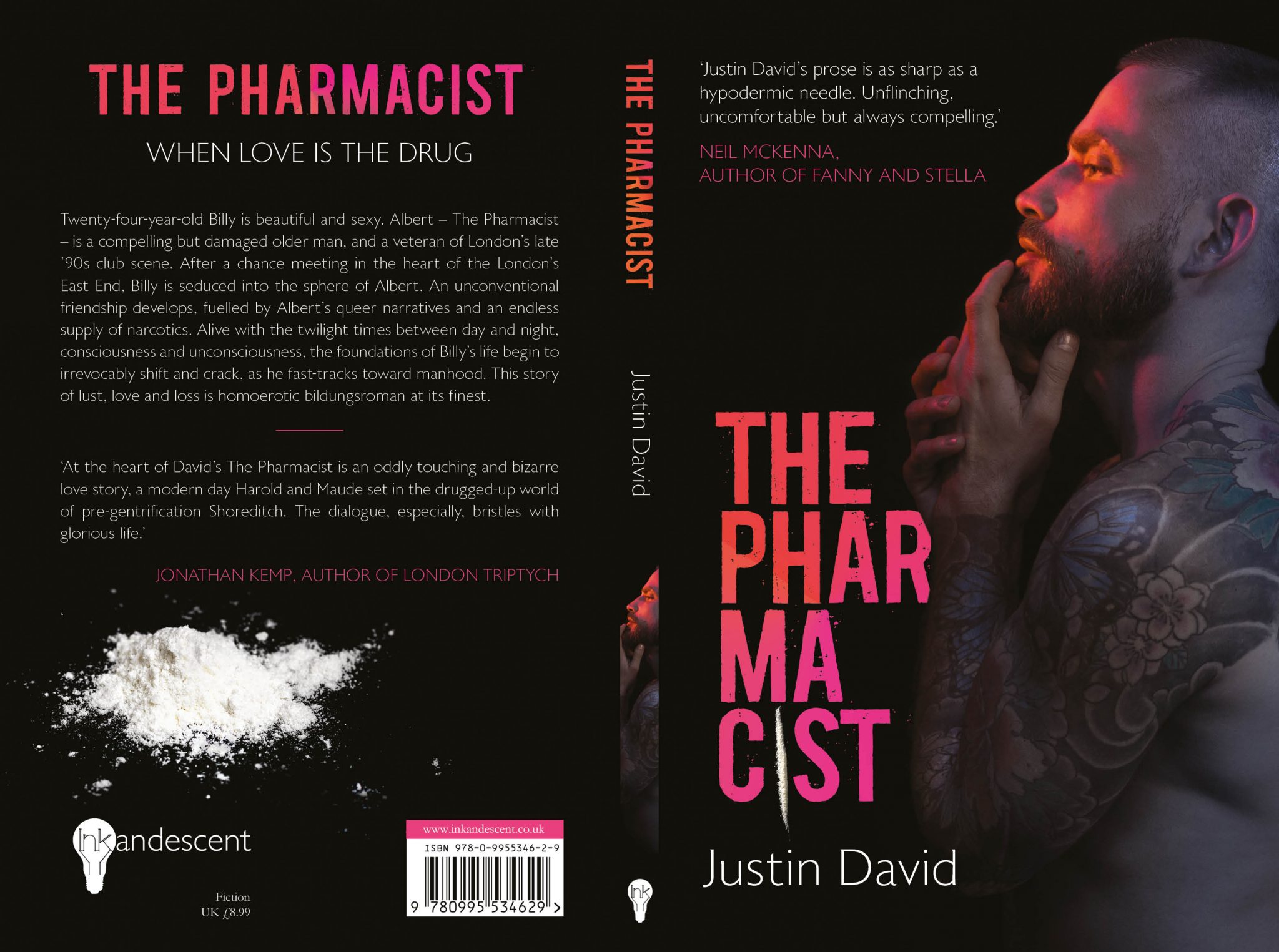