Sex & Love
Home›Sex & Love›Is there any place for monogamy in modern LGBTQ culture?

Is there any place for monogamy in modern LGBTQ culture?

The idea of open relationships and monogamy continue to be a tricky topic in the LGBTQ community. For some, it devalues the importance of monogamy and undermines the effort it took to legalise gay marriage.

Others dismiss it as a permissible way to cheat on your partner.

But do open relationships really threaten to disrupt what we’ve always known and understood about dating and intimacy? Or is it the concept of monogamy that we need to put under scrutiny. Does it still have a place in modern queer culture?

Rob, like a growing number of LGBTQ people, is in an open relationship. He says in the past he felt “trapped” by the idea of being in a monogamous relationship. Rob always wondered if – when it came to sex – he was missing out.

For him, being in an open relationship means he’s able to be in the most honest relationship possible. He and his partner talk regularly. Physical contact with someone outside the two of them is agreed upon in advance. Failing that, they tell each other about it afterwards. Essentially, everything is on the table.

“People ask me why I allow my partner to cheat on me, but cheating, by definition, is doing something dishonest. Asking this ignores the understanding my partner and I have of our own relationship,” says Rob.

It’s a similar story for Pasha. He’s happily married to his husband and emotionally committed, but they’ve agreed to be sexually open.

“We’ve been this way since we first got together. We both liked the idea of sleeping with other people. We talked about what it would take for us to feel safe and loved. It still works for us, more than six years later.”

Because he’s married, it’s common for people to assume that Pasha and his husband are using the label of an open relationship to disguise the fact they’re unhappy in their marriage. But he assures us that this is far from the truth.

“I always make it clear to other guys that they’re my second choice. As soon as my husband is home, I’m not going out with anyone anywhere,” says Pasha.

“Monogamy works for some LGBTQ people, but not everyone is going to be happy in the same relationship.” 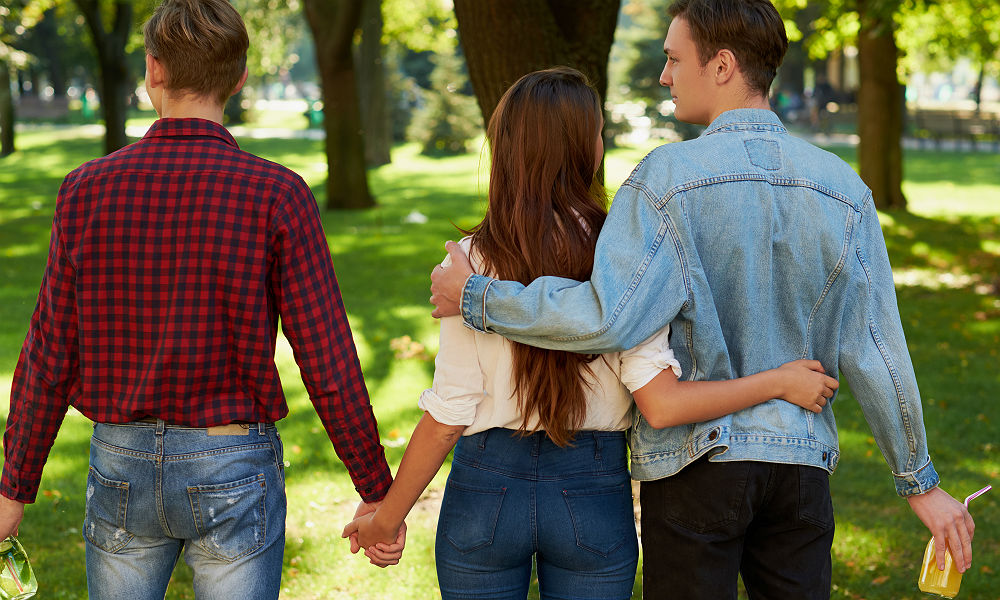 At the core, communication and respecting your partner’s needs and desires appear to be the key to making open relationships work. And for Lana, who identifies as pansexual, her need to feel free is why she’s chooses to be in an open relationship.

“I get very insecure and bored in committed, monogamous relationships and if you meet someone and fall for them, why limit yourself?” She says.

Her partner already has a ‘primary partner’ and all three people involved have a unique dynamic. Her relationship can’t take time away from her partner’s main one and clear roles have been outlined. While it might not work for everyone, it works for them.

With so many moving parts at play and no two relationships the same, where does this leave the concept of monogamy? “I guess the question should be whether monogamy is relevant for anyone, not just LGBTQ people,” says Rob.

“Many people struggle to ignore their desire for other people and we all know someone who’s been cheated on. I just wish people were more open to saying monogamy doesn’t suit them and not be ashamed of it.”

Similarly, Lana explains how the notion of monogamy has meant in the past she’s felt rushed into committing to one person or pushed into getting serious with someone too fast, leading her to be unhappy and feeling stifled.

“Why is there such an expectation that you’ll get together with one person and then go all the way? Do people ever stop and question it or do they follow this routine without thinking?”

That said, not everyone within the queer community is quick to denounce the idea of monogamy so soon. Anna, who is in an exclusive relationship with her girlfriend, believes monogamy has a vital role in modern queer culture because of the common misunderstanding people have of LGBTQ people being sex focused.

“The stigma is definitely projected on gay men and bisexuals primarily, but not all of us want sex all the time. Sure, some queer people do but, so do some straight people. Being LGBTQ doesn’t automatically mean you want multiple partners,” Anna explains.

It was when she was active on the dating scene that Anna realised being with more than one person wasn’t suited to her. “I did date a lot of different people at the time, but I noticed it didn’t make me happy at all,” she confesses.

Just like all other aspects of queer culture, what suits one person isn’t going to suit another. Open relationships require a great deal of trust, maturity and understanding from everyone involved.

“I think being in a polyamorous, open or non-monogamous relationship can actually prove really healthy. It encourages partners to think and talk about their boundaries and emotional needs without any of the societal expectations,” says Lana.

But will open relationships ever become the socially acceptable? That remains to be seen, but there does appear to be a slight shift in acknowledging they exist at the very least. Many gay apps have long included ‘Open Relationship’ as a relationship status for users to pick, should it apply.

But for Rob, and countless others like him, it’s not his job to convince others that the relationship he has is valid and honest. “I’ve reached a point where it’s not worth my time trying to persuade others to change their mind about open relationships. They don’t need to value my relationship for me to know it’s got worth.”

Pull on some lycra swim-briefs and dive ...