Culture
Home›Culture›Experience the Pain and Glory of Pedro Almodóvar

Experience the Pain and Glory of Pedro Almodóvar

If you ask any queer filmmaker where they draw their influence, or who are their cinematic heroes, in almost every case the name of Pedro Almodóvar will be somewhere near the top of the list.

Almodóvar’s latest film – Pain and Glory – is currently screening in cinemas. It’s the filmmaker’s 21st film, and reunites him with actors Antonio Banderas and Penelope Cruz.

Pain and Glory tells of a series of re-encounters experienced by Salvador Mallo (Banderas), a film director in his physical decline.

Some of these re-encounters are physical, some others are remembered – his childhood in the 1960s, when he emigrated together with his family to Paterna in search of prosperity, the first desire, his first adult love in Madrid in the 1980s, the pain of the breakup of this relationship, writing as a therapy to forget, the premature discovery of cinema, and facing the impossibility of continuing to create films.

What’s Pain and Glory about?

Film director Salvador Mallo is over his professional zenith and in the middle of a creative crisis, suffering from various physical and mental ailments. He visits Alberto Crespo – the star of one of his earlier films – with whom he hasn’t spoken for 30 years due to a quarrel. They reconcile and Crespo introduces him to heroin smoking.

The intoxicating effect of the heroin resurfaces Salvador’s memories of some of his childhood experiences – how, as a boy, he moved into a cave-like home with his father and mother, and how the sight of a naked man triggered his first sexual desires.

Crespo brings a monologue of Salvador’s to the stage – it focuses on the memories of Salvador’s relationship with Federico. Federico watched the performance, and subsequently visits Salvador to re-establish their connection.

In a memory, Salvador’s elderly mother accuses him of having left her alone and of not having been a good son.

In the final scene, it’s revealed that Salvador has managed to overcome his creative crisis and move forward with his life.

Is Pain and Glory worth watching?

It’s a beautiful film and has justifiably been critically acclaimed.

Pain and Glory feels like a particularly personal film for Almodóvar – it’s a story about a filmmaker’s creative struggles in making films.

The film debuted at the Cannes Film Festival, where Banderas was recognised with the award for Best Actor. Banderas has had some outstanding performances in his long career, but it’s hard to think of one that tops his portrayal of Salvador Mallo. It’s incredibly nuanced and impressively restrained.

Penélope Cruz plays Jacinta – Salvador’s mother when he was a boy. While it’s a role that feels well within her comfort zone, Cruz lights up the screen – giving us the hard edges of her character without losing her charm.

The eyes and the body of César Vicente will also be burnt into your memory – he plays Eduardo in Salvador’s childhood.

Pain and Glory feels like a very measured and mature film from Almodóvar. It contains all of the characteristics of what you’d expect from one of his films, all of the usual ingredients, but there’s not the fireworks or the melodrama that fuelled his earlier work. This is film-making at it’s most introspective and most masterful. It’s a joy to experience.

The life and legacy of Pedro Almodóvar

Born in 1949, Almodóvar was raised in Calzada de Calatrava, a small rural town in Spain.

When Almodóvar was eight, the family moved to the city of Cáceres. It was in Cáceres where Almodóvar discovered cinema.

In 1967, Almodóvar moved to Madrid to become a filmmaker. Almodóvar embedded himself in the alternative cultural scene of the city, becoming a crucial figure in La Movida Madrileña – the Madrilenian Movement – a cultural renaissance that followed the death of Franco.

Around 1974, Almodóvar made his first short film – using a Super-8 camera. By the end of the 1970s, Almodóvar’s short films were being shown at parties in Madrid and Barcelona. These short films had overtly sexual narratives and no soundtrack, and quickly established Almodóvar’s reputation as an innovative filmmaker.

Almodóvar has been in a relationship with Fernando Iglesias since 2002. 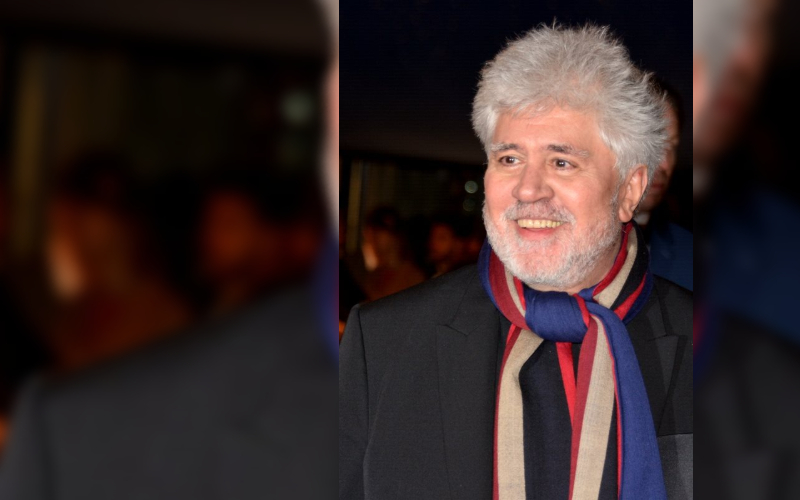 Having developed a distinctive style, Almodóvar’s films generally feature a number of consistent themes – including queer people and queer relationships, obsessions, strong women, religion, music, and an over-the-top embrace of kitsch and camp.

Here’s some of our favourites from Almodóvar’s filmography.

This is a story about a complicated love triangle between a gay filmmaker (Eusebio Poncela), his transsexual sister (Carmen Maura), and a repressed murderously obsessive stalker (Antonio Banderas).

Women on the Verge of a Nervous Breakdown (1988)

This story focuses on Pepa (Carmen Maura), a woman who has been abruptly abandoned by her married boyfriend, Iván (Fernando Guillén). Over two days, Pepa frantically tries to track him down. In the course, she discovers some of his secrets and realises her true feelings.

An adaptation of Ruth Rendell’s novel Live Flesh, the film follows a man who is sent to prison after crippling a police officer and seeks redemption years later when he is released. Live Flesh marked Almodóvar’s first collaboration with Penélope Cruz, who plays the prostitute that gives birth to Victor. Additionally, Almodóvar cast Javier Bardem as the police officer David and Liberto Rabal as Víctor, the criminal seeking redemption. Italian actress Francesca Neri plays a former junkie who sparks a complicated love triangle with David and Víctor.

The story revolves around a woman Manuela (Cecilia Roth), who loses her teenage son, Esteban (Eloy Azorín) in a tragic accident. Filled with grief, Manuela decides to track down Esteban’s mother, Lola (Toni Cantó), and notify her about the death of the son she never knew she had. Along the way Manuela encounters an old friend, Agrado (Antonia San Juan), and meets up with a pregnant nun, Rosa (Penélope Cruz).

This is a tale of child sexual abuse and mixed identities, starring Gael García Bernal and Fele Martínez.

This story is a mixture of comedy, family drama and ghost story, following the story of three generations of women in the same family who survive wind, fire, and death.

Exploring the complexity of being The Third ...