Features
Home›Features›Should architect Philip Johnson be erased from queer history because of his links to fascism?

Should architect Philip Johnson be erased from queer history because of his links to fascism?

New York’s Museum of Modern Art is under growing pressure to remove the name of renowned architect Philip Johnson from its galleries and titles after Harvard addressed the designer’s legacy at the university, saying his history of racism, fascism and white supremacy had “absolutely no place in design”.

Johnson studied at Harvard, and worked at the Museum of Modern Art. According to reporting by the Guardian, Harvard has announced that it will no longer use Johnson’s name to refer to his iconic Glass House in Connecticut – a residence that Johnson designed and that is now owned by Harvard.

The debate about Johnson’s legacy has been triggered by a collective architects and designers known as the Johnson Study Group. Highlighting Johnson’s links to fascism, the group wrote an open letter to MoMA and GSD calling for his name to be struck from “every leadership title, public space, and honorific of any form”.

Writing in response, Harvard University said in a public letter: “His racism, his fascism, and his strenuous support of white supremacy have absolutely no place in design.” The letter went on to acknowledged the “power of institutional naming, and the integrity and legitimacy it confers”.

Johnson’s name also features prominent at the Museum of Modern Art, but MoMA has yet to confirm if it will be following Harvard’s lead. In a statement responding to the open letter from the Johnson Study Group, MoMA has said that “the Museum is taking this issue very seriously and is extensively researching all available information.”

What were Philip Johnson’s links with fascism?

Pursuing a career in journalism, Johnson was working as a correspondent for Social Justice during the 1930s. Social Justice was   a newspaper run by the populist religious leader, Father Charles Coughlin. Coughlin was a Catholic preacher who reached a huge audience through his weekly radio broadcasts – it’s estimated that about 30 million Americans tuned in each week to listen to him. By the late-1930s, Coughlin’s broadcasts had become increasingly anti-semitic and pro-fascist.

On behalf of the Social Justice newspaper, Johnson made several trips to Germany  -  providing sympathetic coverage of the Nazi rally at Nuremberg in 1938, as well as the German invasion of Poland in 1939.

Johnson later described his activities in Germany as stupid, and it remained a point of embarrassment for him throughout his life.

The Johnson Study Group letter said: “Philip Johnson’s widely documented white supremacist views and activities make him an inappropriate namesake within any educational or cultural institution that purports to serve a wide public.”

It added: “He not only acquiesced in but added to the persistent practice of racism in the field of architecture, a legacy that continues to do harm today.”

Who was Philip Johnson and why was he such an important architect?

Let’s take a look at the life and legacy of architect Philip Johnson.

Born in 1906 and raised in Cleveland, Johnson studied history and philosophy at Harvard. Upon completing his studies in 1927, Johnson travelled to Europe with architectural historian Henry-Russell Hitchcock.

In 1930, Johnson joined the architecture department of the Museum of Modern Art in New York.

From 1936 until 1941, Johnson worked as a journalist before enrolling in the Harvard Graduate School to study design and architecture.

In 1941, Johnson enlisted in the US military. Johnson was stationed in the US for the duration of World War Two.

Having completed his military service in 1946, Johnson returned to work at the Museum of Modern Art while also establishing his own architecture practice.

Johnson’s first project was to build himself a residence in Connecticut.

Other notable buildings that further consolidated Johnson’s reputation and unique point of view include the interior of the Four Seasons restaurant in New York City’s Seagram Building. This was completed in 1956.

Johnson’s first notable relationship appears to have been with cabaret singer Jimmie Daniels, whom he met in 1934.

Johnson spent 45 years in a relationship with David Whitney. 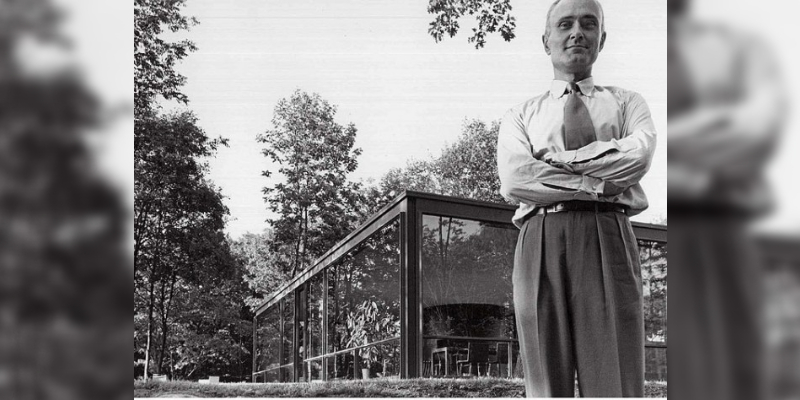 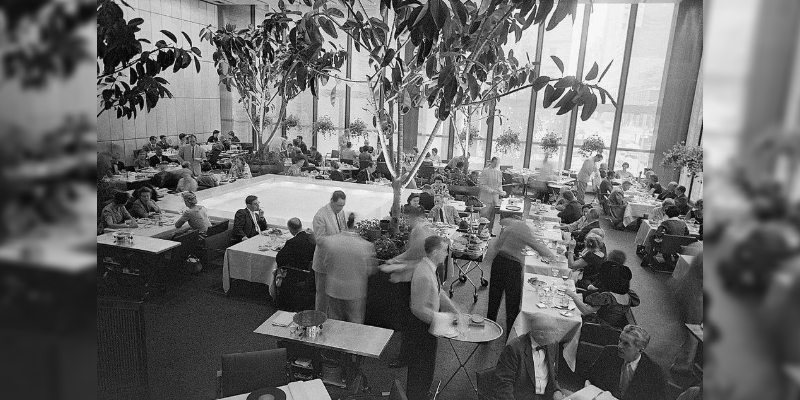