Can’t believe that we’re already at the end of Drag Race Philippines – this series has definitely breathed some fresh life into the franchise.

Are you up to speed with what happened in the final episode? Let’s get into it.

So great to see all of the returning queens back on the stage – serving some stunning looks. Vinas in the moon-boot was a moment – she obviously really hurt her foot!

We then got a performance from Mama Pao, living her fantasy.

We got so many looks this episode – it was a feast of fashion.

As well as all of Mama Pao’s looks, and the returning queens, our Top 4 had two runway looks to serve – before getting to their lip-sync outfits.

The first runway category was Camp Couture, and the second was Indigenous Fashion.

The spinning wheel was brought out to decide the match-ups in the knock-out lip-syncs to take our Final 4 down to a Top 2.

First up it was Precious versus Eva. When Eva’s name was called to go up against Precious, you could almost see on her face that she knew she’d drawn the short straw. Eva is a good performer and gave a solid show, but Precious really is on another level when it comes to working a stage. Precious advanced to the Top 2 and Eva was eliminated.

The second match-up was Xilhouette versus Marina. We’ve seen already in this competition that Xilhouette doesn’t perform regularly, and Marina is a knock-out dancer. Xilhouette did what Xilhouette does, while Marina was  totally compelling and held the spotlight. Marina advanced to the Top 2 and Xilhouette was eliminated.

The final lip-sync track was Sirena by GLOC-9.

Lots of powerful emotions and drama to tap into with this track and it was a great showcase for the performance skills of Marina and Precious.

This honestly could have gone either way, but ultimately the decision went in favour of Precious and she was crowned the first winner of Drag Race Philippines.

Overall, this has been a very strong season – a great cast, engaging judges, and a very watchable competition.

Official bio: “Precious Paula Nicole is one of the most known Filipino drag queens, having been in the drag scene for more than 11 years. She is a professional dancer and is also known for her comedy shticks and impersonation of divas such as Mariah Carey, Beyoncé, and Asia’s songbird, Regine Velasquez. A star performer at O Bar, the premier drag club in the Philippines, she is a mother to a host of other popular drag queens.”

Final ranking: It’s been a roller-coaster for Precious, but she’s a natural and compelling performer and that’s taken her all the way to the crown. A very worthy winner.

Official bio: “Marina Summers is a fierce tropical queen known for her fish looks, hot body, exceptional dancing, and all-around performances. Her drag name stems from her love for the beach. Marina left her bucolic hometown of Nueva Vizcaya and moved to Manila to create content for one of the biggest film companies in the country. She began performing as a drag queen in 2019 and recently released her debut single “I Have Arrived” on Spotify and iTunes. She performs regularly at Nectar Nightclub and is another one of the founders of Drag Playhouse PH.”

Final Ranking: Marina is very good at drag and she’s delivered excellence from the beginning of this competition. She didn’t put a foot wrong in this competition and she made it to the Top 2. It’s clear that we’ll be seeing a lot more of Marina. 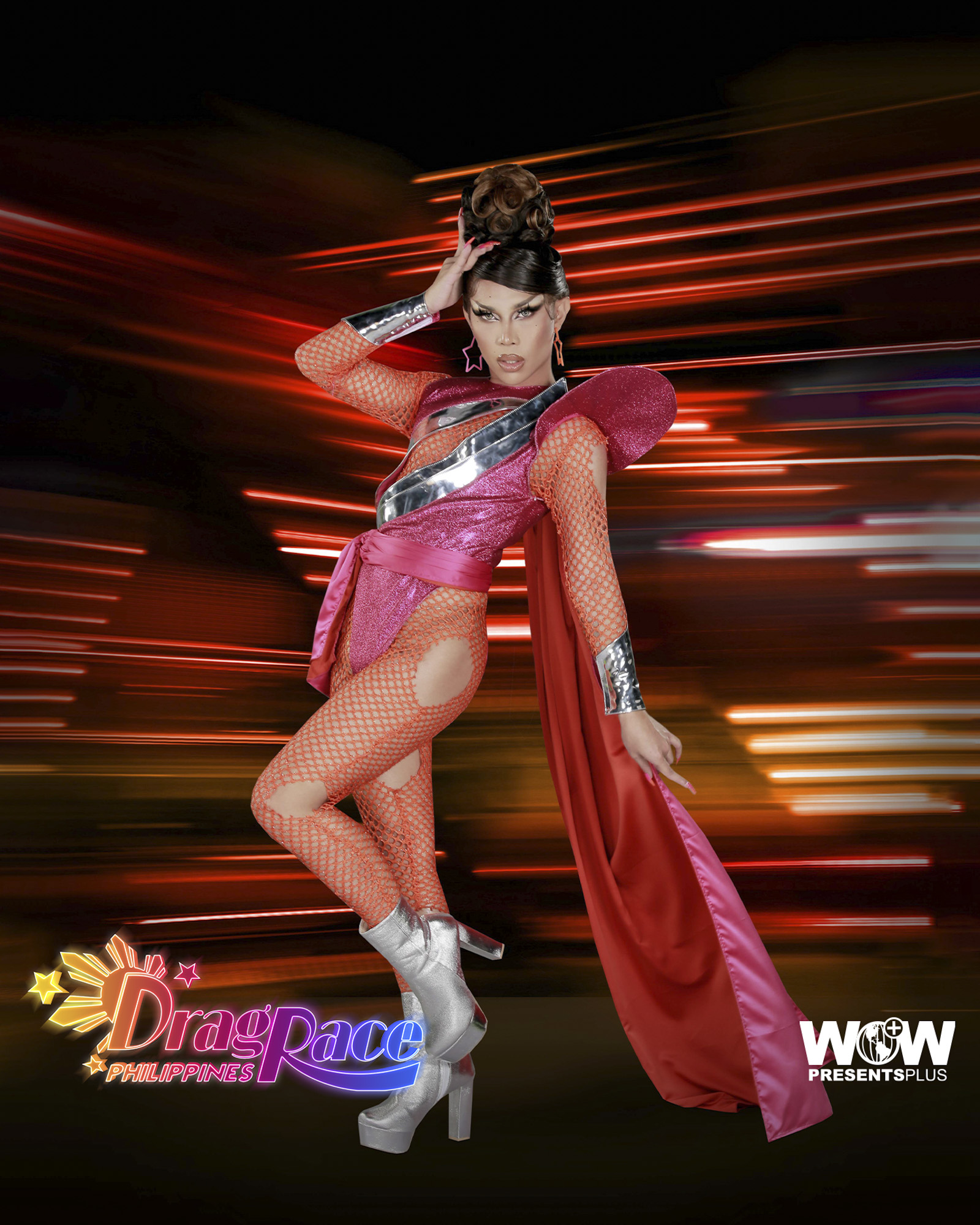 Official bio: “Eva Le Queen worked as an OFW in Singapore for eight years before giving up her corporate profession to follow her dream of becoming a drag artist. During the day she would work corporate, but at night she worked as a drag queen. Eva won first runner-up in Singapore’s Drag It Out All-Stars competition, only four months after she started doing drag. Eva’s drag is inspired by literary and cinematic villains. Her strengths are in being both a comedy queen and her looks. Eva is a resident queen at Nectar Nightclub and is also one of the founders of Drag Playhouse PH.”

Final Ranking: Eva comes across as very accomplished and confident but her insecurities about her singing and dancing seemed to sometimes have her second-guessing herself. But she’s been incredibly consistent, likeable, and watchable throughout this season and she made it to Top 4. 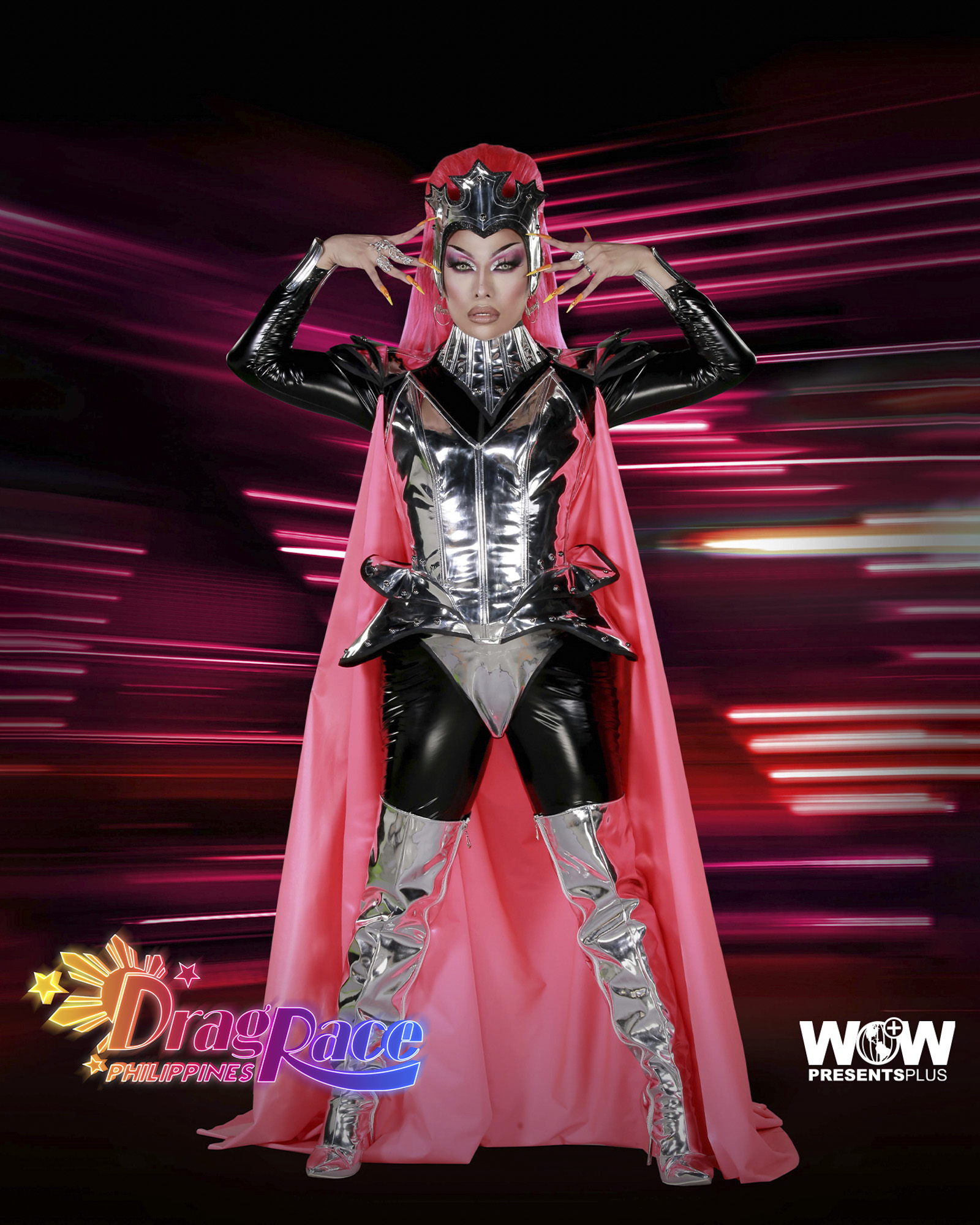 Official bio: “Xilhouete is respected in the drag scene in Manila. She is the creative director and one of the owners of Nectar Nightclub. Xilhouete is considered a drag mother of many queens, especially those who are regular performers at Nectar. An entrepreneur, director, and artist, Xilhouete advocates for the legacy of the drag queens who have paved the way.”

Final Ranking: She’s old school drag and she is used to being the mother of the house. However, Xilhouette was also smart enough to know that this competition puts everyone on an even footing. She put in the work and made it to Top 4. 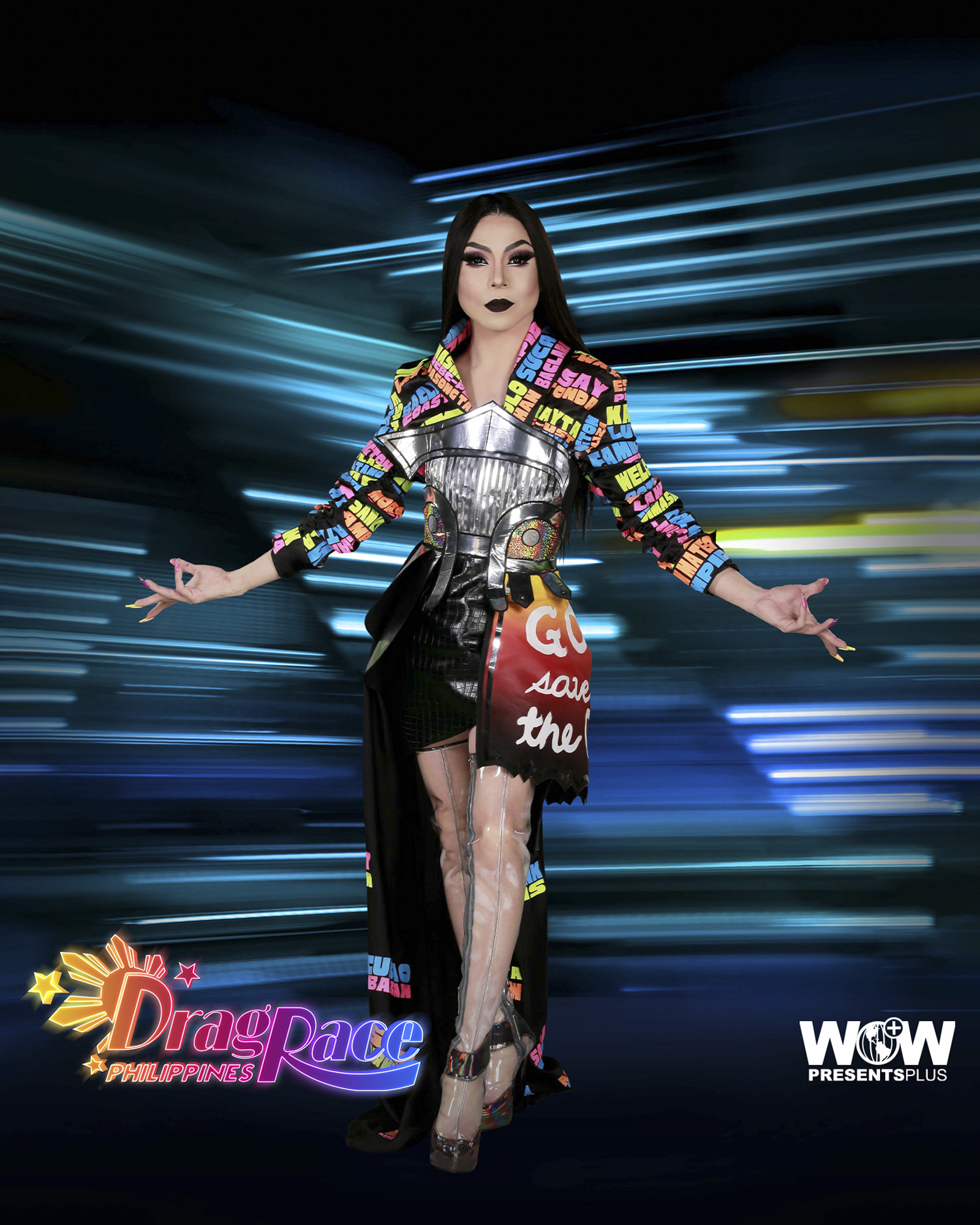 Official bio: “Minty Fresh serves looks that kill all day, every day. She is a model, designer, pop singer, make-up artist, and performer. A staunch supporter of LGBTQIA+ rights, she slays the stage weekly at Nectar Nightclub. Ariana Grande reposted Minty’s lip-sync performance on her Instagram story as she led hundreds of thousands of people in an election sortie in Manila.”

Final Ranking: Minty been on a bit of a roller-coaster this season – it was a really strong start, then there were some downs, a few more ups, and then eliminated in Episode 9 – beaten in the lip-sync by Xilhouette. It’s been a good series for Minty – she’s a model, she turns looks, and we’ll be seeing more of her. 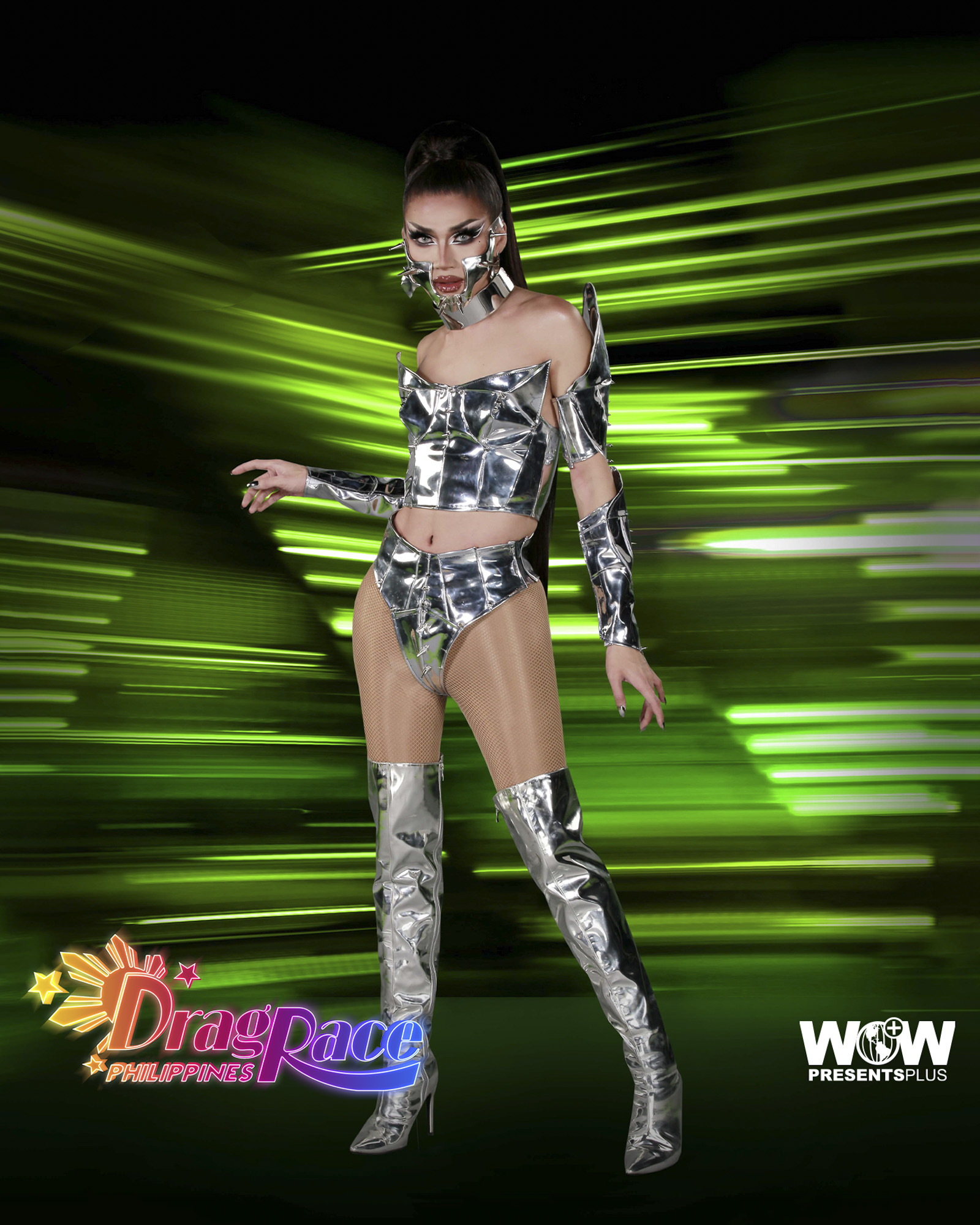 Official bio: “Brigiding is one of the most prominent names in the Philippine drag scene. She is known for her extravagant looks and show-stopping performances and has been featured in Pride parades and drag events both in the Philippines and abroad. She is also one of the founders of Drag Playhouse PH, a local drag content and entertainment provider.”

Final Ranking: I really like Brigiding but it almost as if she was set up to fail from the beginning in this competition. She’s warm, engaging, gives good TV, and delivers dynamic performances. Almost against the odds, she made it to Episode 8 before being eliminated by Minty in the lip-sync. 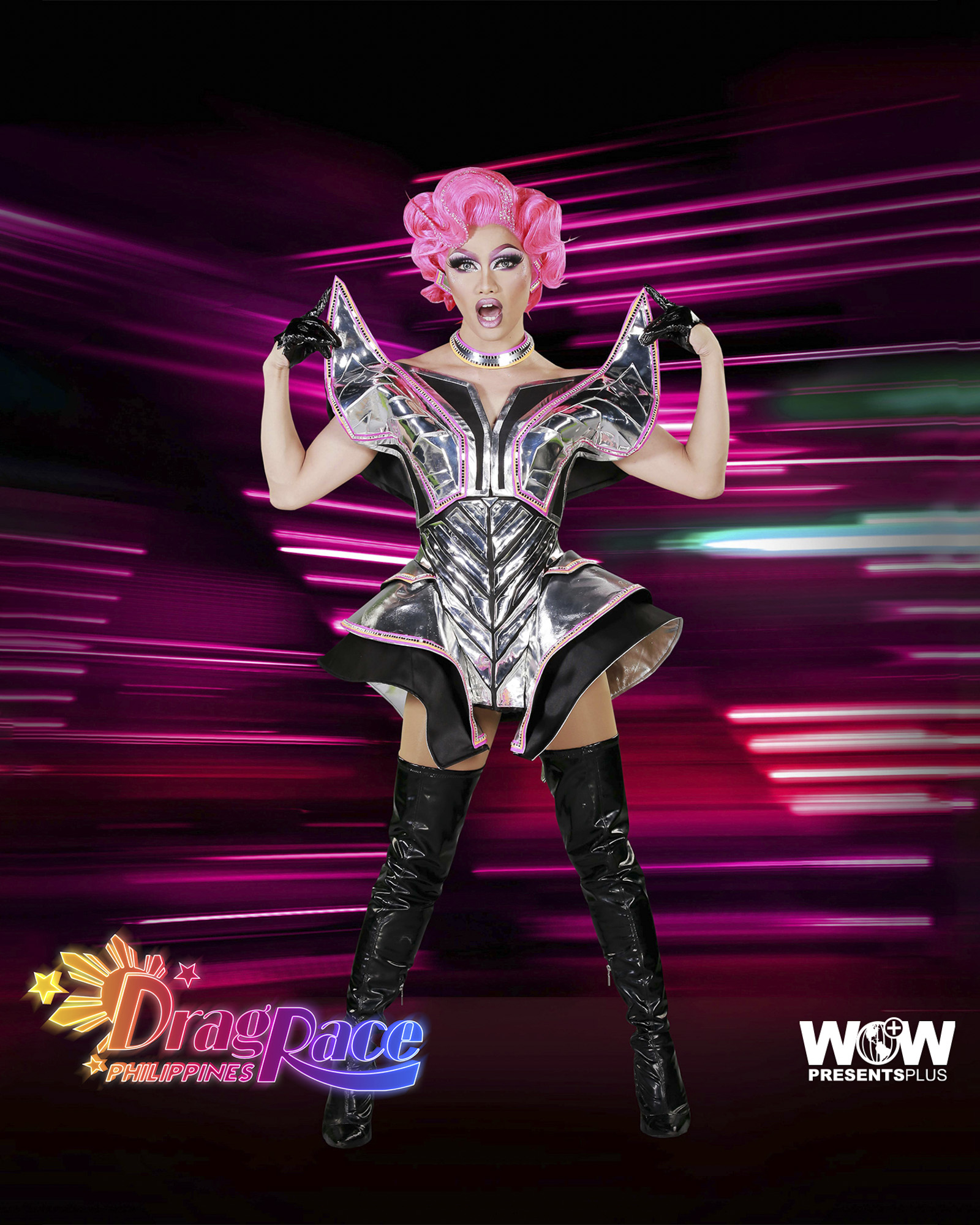 Official bio: “Viñas DeLuxe is a triple threat and an all-in-one package. She started doing drag while at university with a background in theater that helped harness her sharp wit, performance skills, and knack for comedy. Viñas DeLuxe owns a wig business and has built a strong social media presence. She is also in a drag group called Te Divine Divas, who gained popularity during the pandemic, mounting digital performances and live streams worldwide.”

Final Ranking: Viñas had a really strong start to this competition and seemed like the frontrunner – I was convinced that she would be in the Top 4. However, her momentum did seem to stall and the combination of a design challenge and a foot injury saw her eliminated in Episode 7, beaten in the lip-sync by Eva. 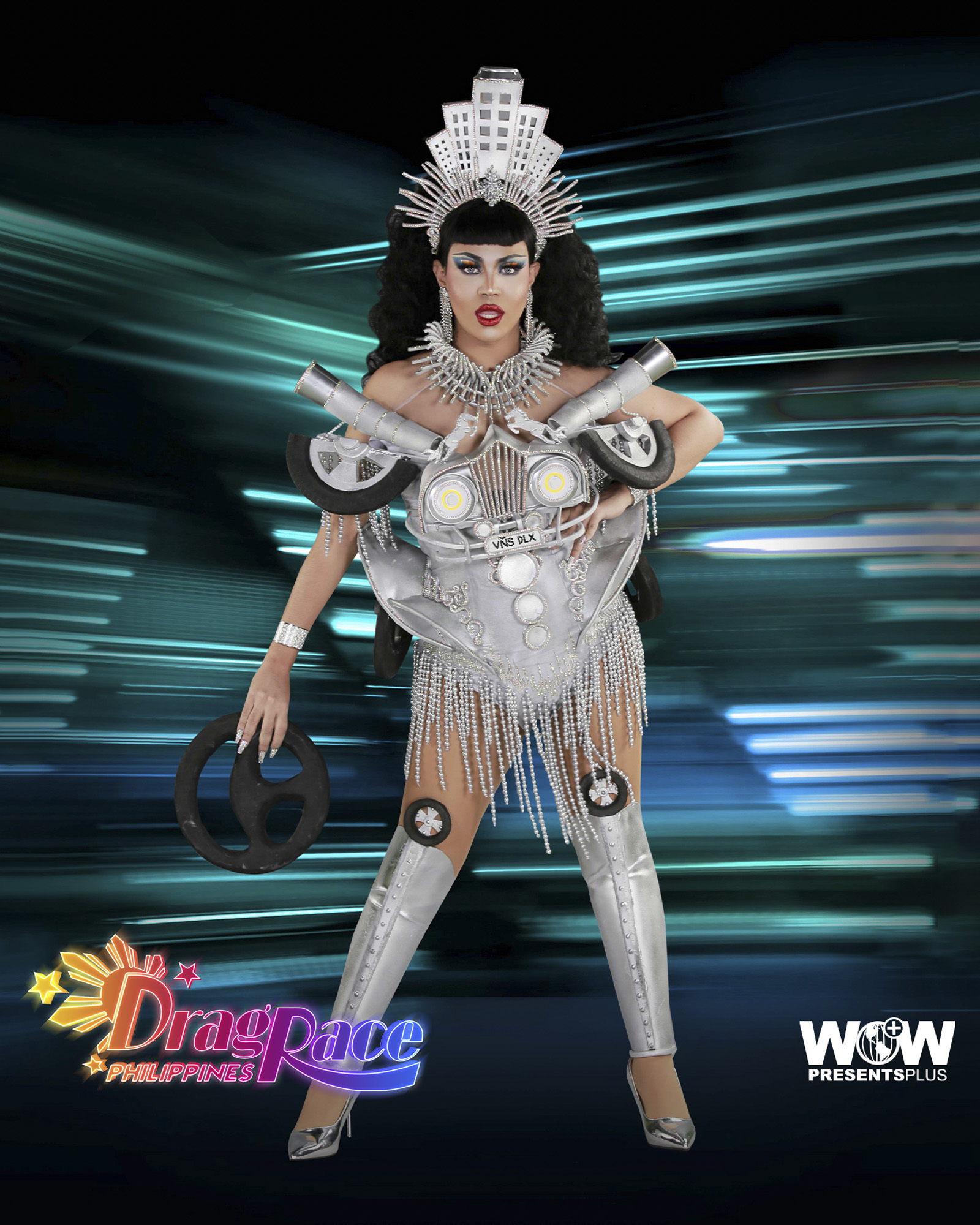 Official bio: “A proud Davao queen who has been doing drag for more than 15 years, Lady Morgana is a true classic drag queen. With her spider lashes, high brows, creative wigs, and out-of-the-box costumes, Lady Morgana is known for her comedic and hosting skills, always making sure that her performances are sprinkled with love, laughter, and feelings. She works as a financial advisor during the day.”

Final Ranking: Morgana is a comedy queen and she’s demonstrated that she’s engaging and likeable as well as an excellent lip-sync performer. She made it to Episode 5, beaten in the lip-sync by Brigiding. 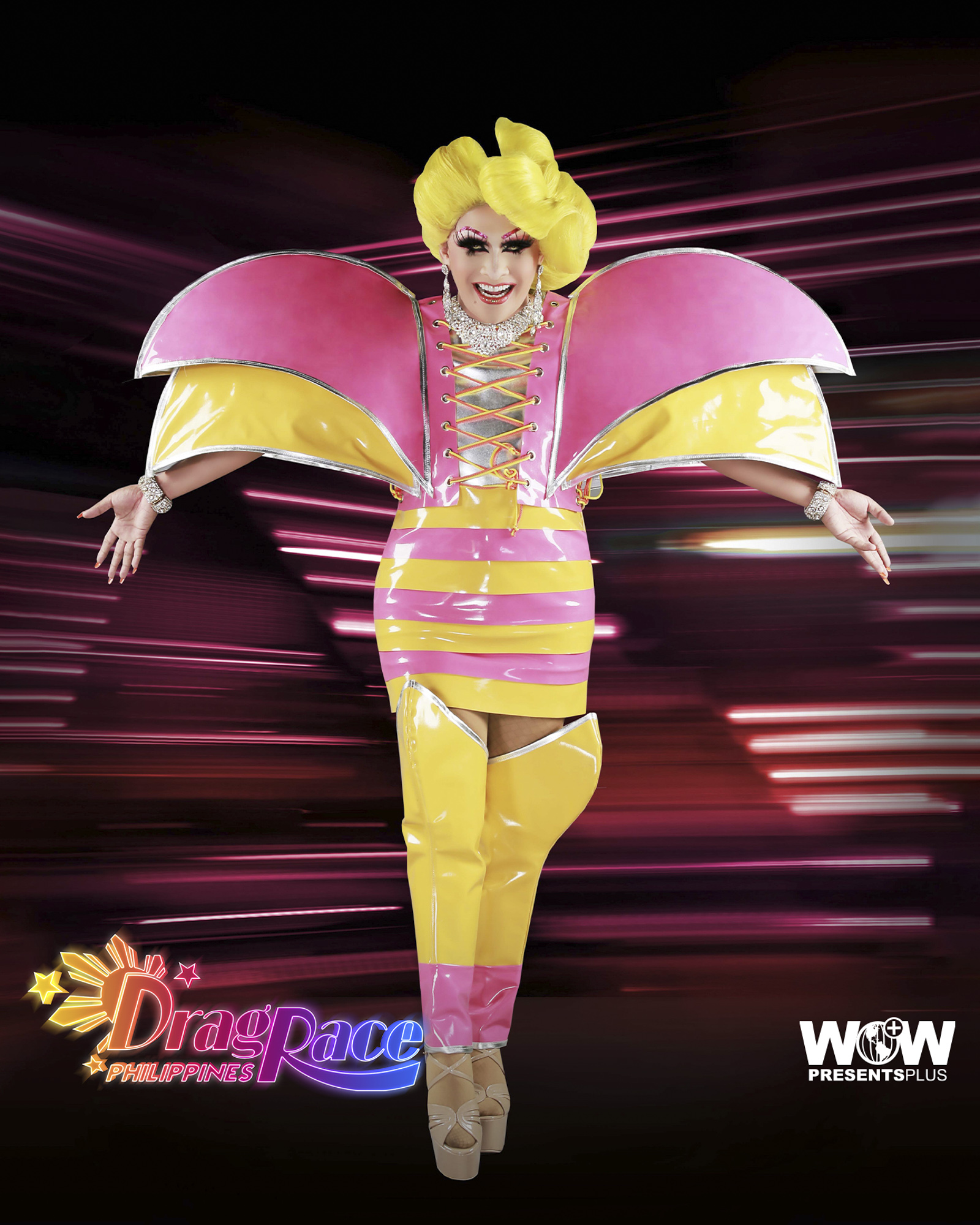 Official bio: “Turing has been a professional drag artist for more than seven years, performing in one of the most known drag bars in the Philippines, O-Bar. A Broadway fan and a theater kid who used to be a cheerleader in college, Turing is known in the drag scene as a fierce dancer and a lip-sync slayer. She has openly discussed how drag has made her feel more comfortable in her skin, and is a strong advocate for body positivity.”

Final Ranking: Turin has established that she’s a great performer and owns a stage, but she couldn’t quite deliver consistently across all of the other challenges – eliminated in Episode 4, beaten in the lip-sync by Morgana. 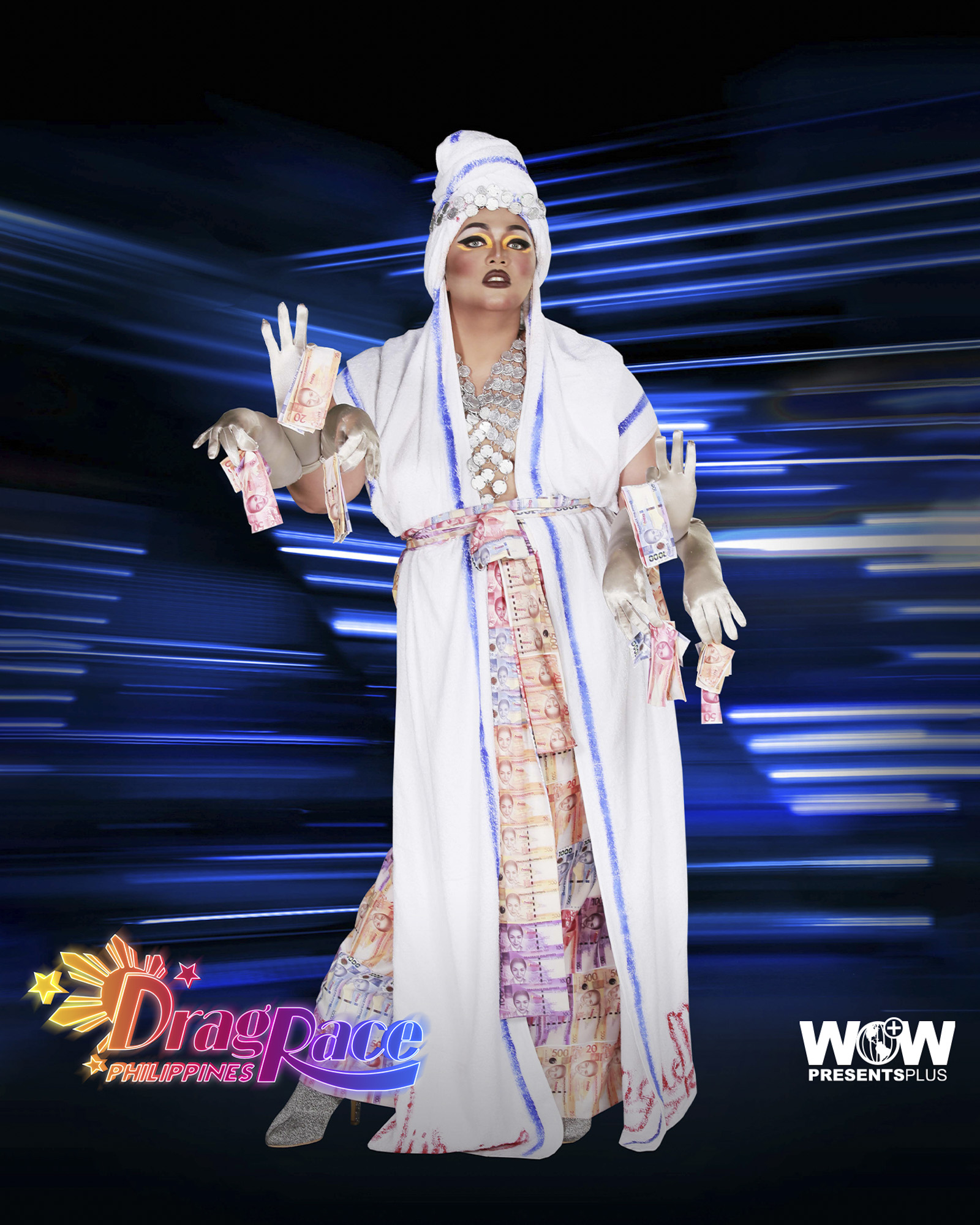 Official bio: “Gigi Era is the diva from Down Under. Hailing from Melbourne, she is popular in the Australian drag scene for her death-defying stunts and fabulous real-hair wigs. Gigi was a former dancer and airplane cabin crew member based out of Dubai. She is now back in the Philippines representing her hometown, Davao.”

Final Ranking: Gigi got to demonstrate that she’s a strong performer on stage, but her reserved personality seemed to be holding her back in this competition – eliminated in Episode 3, losing the lip-sync to Xilouhette. 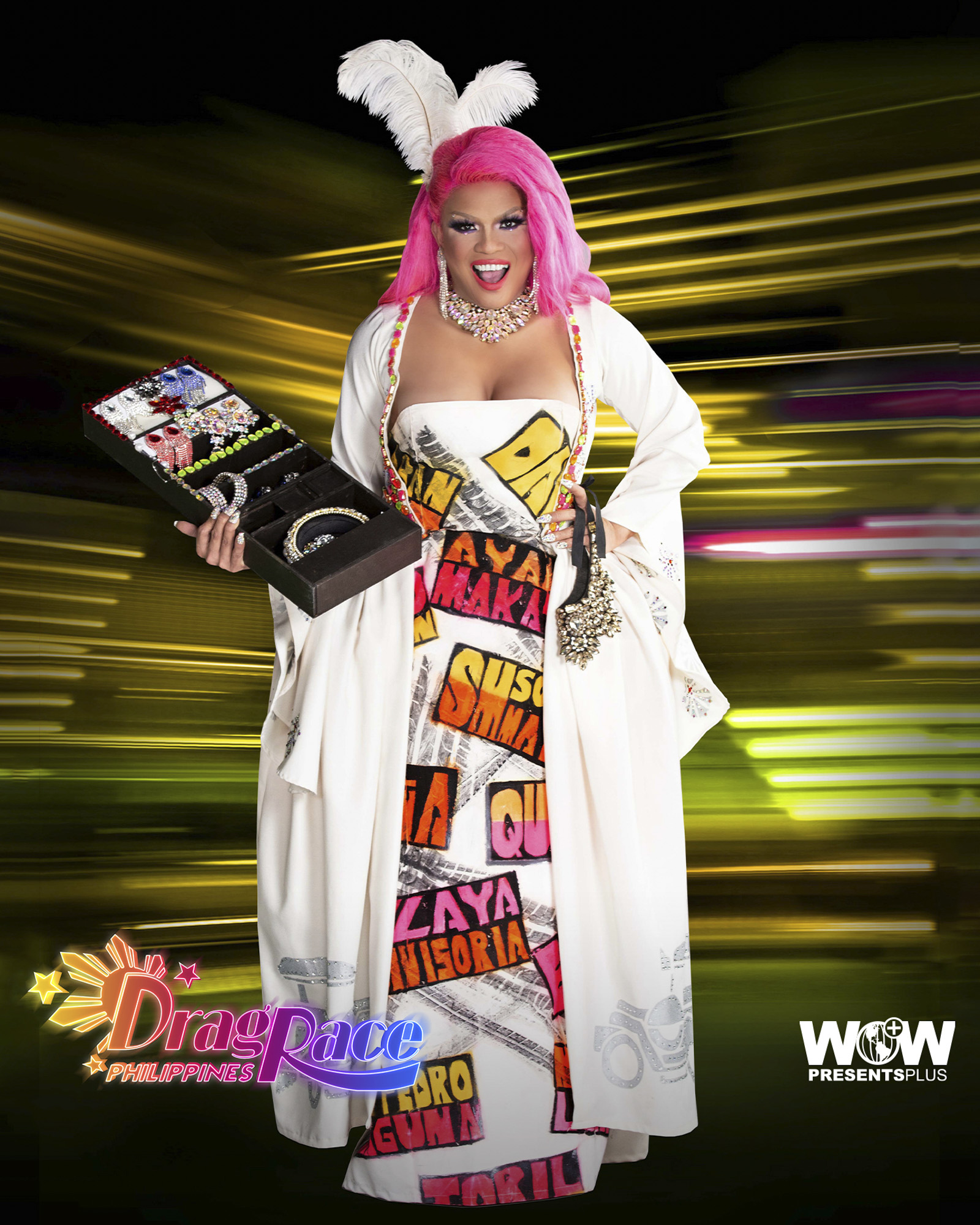 Official bio: “A crowned pageant queen with a list of titles on her sash, Corazon has jumped from one beauty contest to another competing in both male bikini contests and provincial Miss Gay events and talent shows. In addition to drag, Corazon is a makeup artist and a designer; creating looks for fellow drag and beauty queens alike.”

Final Ranking: She’s clearly a very accomplished drag queen who also has a great sense of humour. She really made me laugh in the climbing the pole mini-challenge that she won. But, there’s no room for mistakes in this competition and was eliminated on a design challenge in Episode 2 – beaten in the lip-sync by Turing. 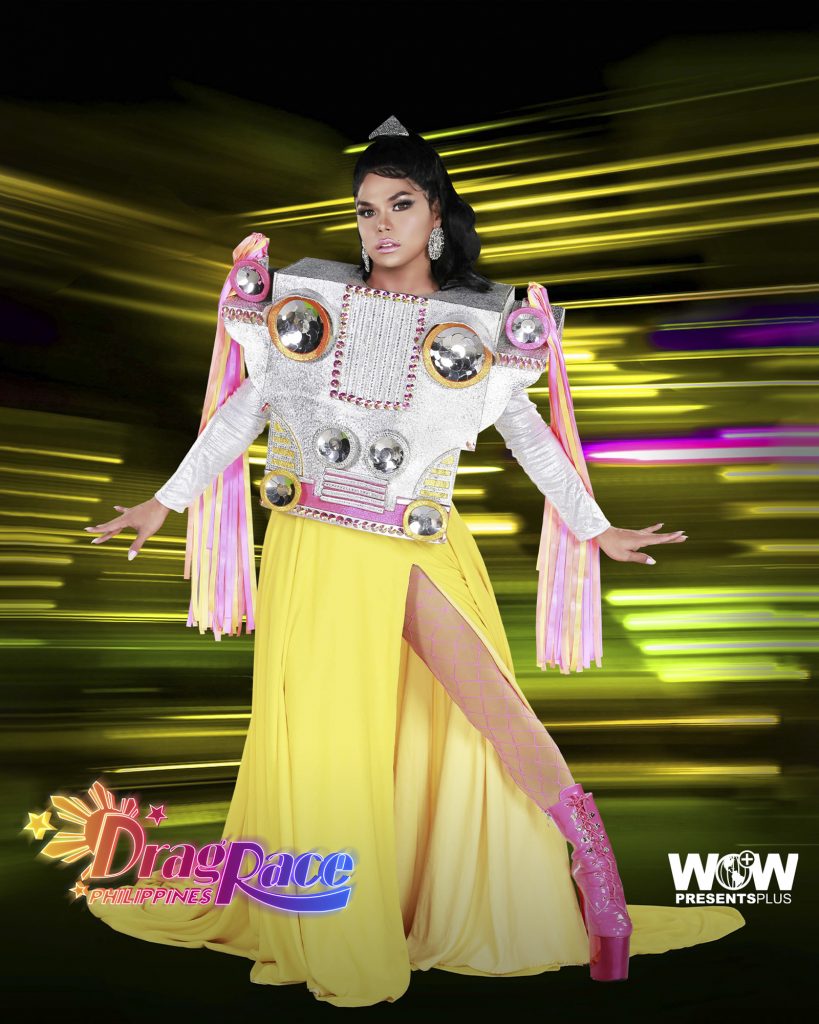 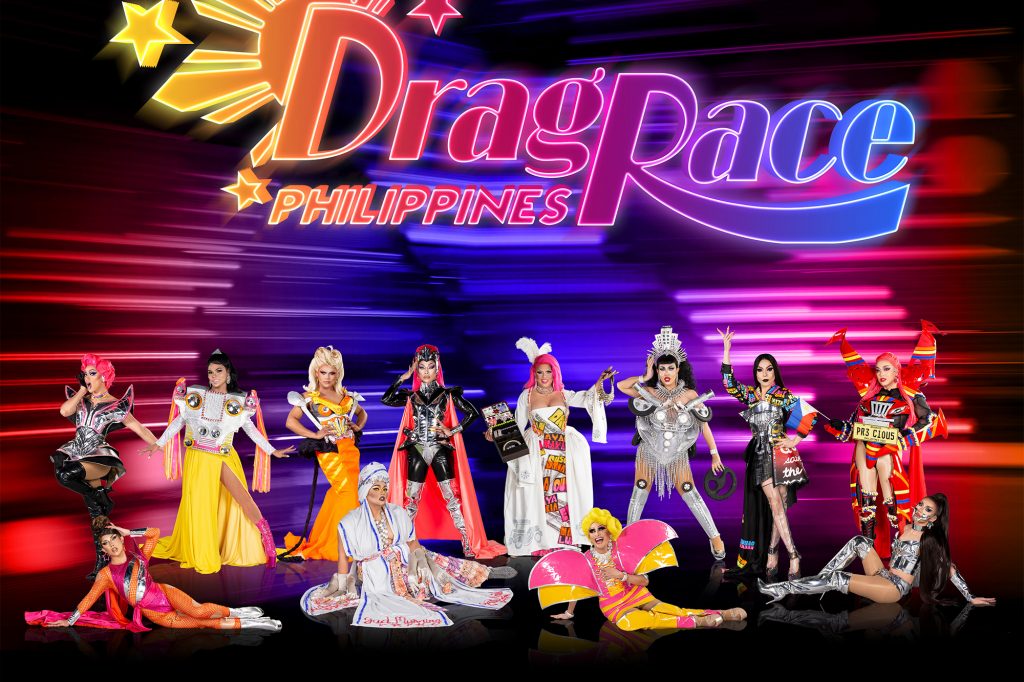 Official bio: “Prince is known on social media for her make-up transformations. Before joining Drag Race Philippines, Prince was a social media strategist and is relatively new to the Philippine drag scene. Prince’s drag is heavily influenced by sci-fi and anime, and believes that extraterrestrial looks have a space in Philippine drag. Prince is also one of the co-founders of Drag Playhouse PH. Aside from doing drag, she manages her own make-up and merchandise line.”

Final Ranking: We didn’t get to see a lot from Prince, the Pork Chop of this season. She seems likeable and fun. 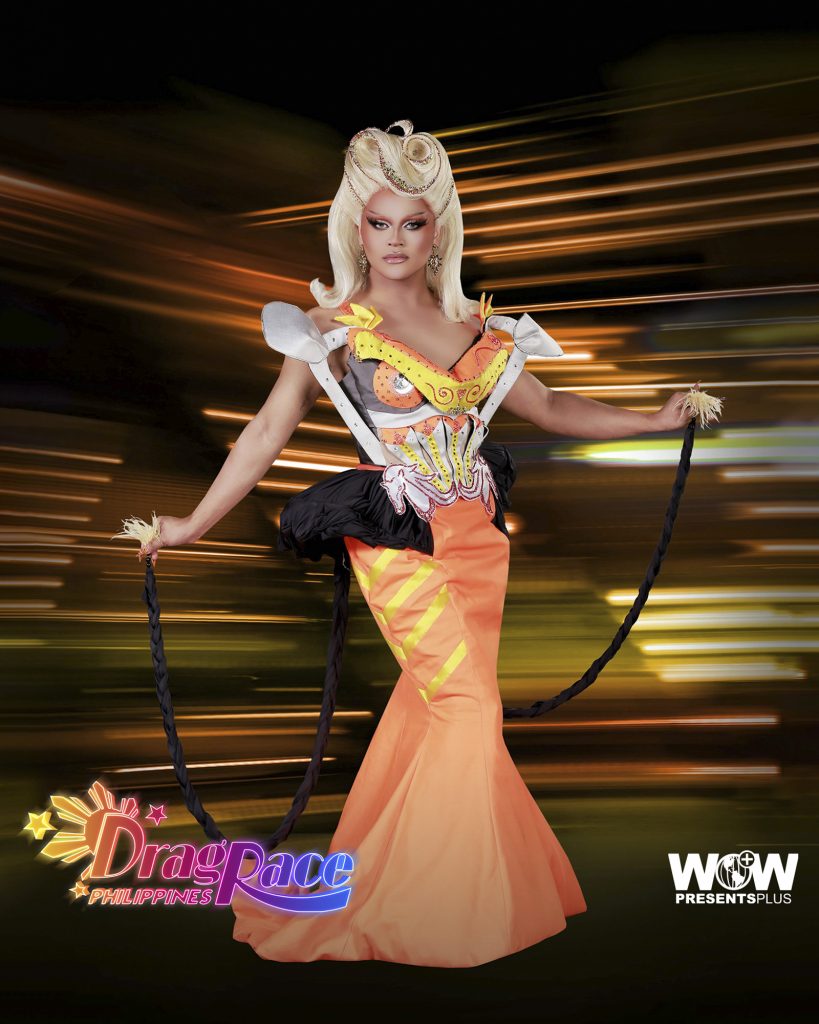