Features
Home›Features›Ray Dalton is fearless and fighting back

Ray Dalton is fearless and fighting back

I rang Ray Dalton while he was driving down to Key West.

I’d been introduced to Ray by Jack Mackenroth. People who work in sex-positive professions are increasingly finding themselves silenced as social media platforms deactivate their accounts. It’s an issue that Mackenroth is working hard to bring attention to, and he’d suggested that Ray Dalton would be good to talk to about the subject.

FOSTA-SESTA is a package of US legislation that was passed into law in April 2018.

One of the objectives of FOSTA-SESTA was to expand the liability for sex trafficking to online platforms found to be “knowingly assisting, supporting, or facilitating a violation” of the sex trafficking laws.

How does FOSTA-SESTA negatively impact sex-workers?

While on the face of it, an intention to tackle sex trafficking is a positive move, it seems that rather than protecting sex-workers, FOSTA-SESTA is making life more difficult.

One of the immediate consequences of the introduction of FOSTA-SESTA was that Craigslist shut down its Personals section. Explaining their decision, Craigslist said that they didn’t have the resources to monitor all listings to ensure that none of its users were breaching the provisions of FOSTA-SESTA. Other similar sites have also followed suit.

Another direct consequence of the introduction of FOSTA-SESTA was that Tumblr changed its content policies to remove any sexual content being posted to the platform.

All of these moves are making it harder for people working in sex-positive professions to promote their content, to build their brand, and connect with clients.

Is FOSTA-SESTA the only censorship issue facing sex-workers?

“There’s four main reasons behind the rise in censorship…” explains Dominic Ford, founder of JustFor.Fans. “FOSTA-SESTA, Advertisers who don’t want any association with explicit content, Apple’s restrictions in the App Store, and restrictions from payment providers.”

Platforms such as Facebook, Instagram, and Twitter rely on advertising revenue in order to generate the profits required by their shareholders. Advertisers are becoming increasingly cautious about having their ads appearing alongside content that could be viewed as sexual. This requirement from advertisers puts pressure on social media platforms to remove sex-positive content.

Apple began its purge against ‘adult’ content in its App Store back in 2010. It’s a move that has been subsequently followed by Google’s Play Store. Apps that provide users access to nudity or sexually explicit content are likely to be blocked from the app stores. It’s for this reason that a number of gay dating apps have been forced to implement tighter restrictions on the profile photos that users can upload.

“I’ve been banned by MailChimp…” confirms Ray Dalton, illustrating how payment providers can shape the content and the users that they’re willing to support on their platforms.

How can sex-workers navigate an increasingly negative social media landscape?

“We’ve got to fight back…” insists Ray Dalton. “When something like this happens, it puts clients off. The men who hire – especially the ones that have more to lose – they’re now less likely to hire.”

Entrepreneurial responses to a changing world

“I feel that I’m being censored…” says Ray. “Social media companies say that there’s no such thing as being shadow-blocked, but that’s what it feels like. I’m investing in social media, and my brand is really out there – but my audience isn’t growing.”

“I’m regularly hearing about friends of mine getting their accounts suspended…” says Ray. “It takes its toll on you – you begin to think that you’re going to be next.”

“Once FOSTA-SESTA became law, I hired a social media expert…” continues Ray. “We went through and cleaned out all of my posts that might not comply with their regulations. I have to play their game. I have to avoid the appearance of evil and play by their rules until we can overturn these laws.  If your social media accounts are gone, you don’t have a voice and can’t fight.”

“I have to keep looking at new sources of income…” explains Ray. “I’ve got JustFor.Fans, and I’m looking at starting a YouTube channel. My big thing is Fornication Party.”

“My passion in life is to create community and raise awareness…” says Ray, as our conversation comes to an end. If Ray Dalton is in charge, then that’s definitely a community that I want to be part of. 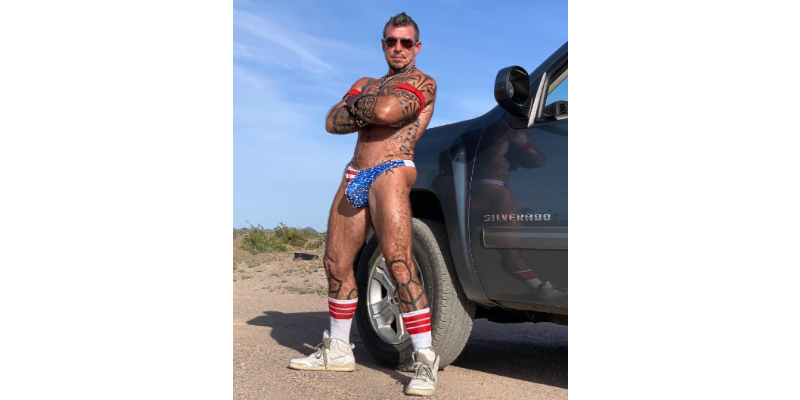 Power Bottoms should probably be at the ...