The Drag Race take-over of the world continues, with France the latest country to take their place on the starting grid.

Are you up to speed? Let’s get into it.

This week’s mini-challenge celebrated the power of Drag Kings and Rock ‘n Roll.

The queens had to get into quick-drag and then bring their rock ‘n roll fantasies to life.

It was all stupid-funny, and Grande Dame was declared the winner

This week’s main challenge was an acting challenge, a drag version of Call My Agent.

As the winner of the mini-challenge, Grande Dame got to decide the roles but everyone seemed to pretty much get what they wanted.

We saw a bit of the recording process and then the edited cut was played on the main stage.

Overall, this seemed of a pretty high standard. It was entertaining to watch and no one seemed to bomb.

This week’s category was Floral.

This series is hosted by RPDR alum, Nicky Doll. On her original season, Nicky didn’t really seem able to showcase her personality, but she’s perfect as the host. Her boy looks are cute, and her drag is top-tier. Plus, she comes across as warm, funny, and engaging. It’s been a good start for Nicky Doll.

In the Top were Paloma, Lolita, and Grande Dame.

In the Bottom were Lova, Bertha, and Soa.

Based on the comments we saw, it was a bit confusing as to whether Bertha or Grande Dame were in the top, or whether they were both in the bottom. Everyone seemed to do a fairly solid job in this challenge, so it was hard to pick the bottoms.

Ultimate, it was Paloma who was declared the winner, while Soa and Lova wound up in the Bottom 2.

This is a fun, girl-group track but it is a bit one-level in terms of energy.

Soa seemed in control from the beginning, whereas Lova lost the dress and the wig and was dancing around in her weird bodysuit.

I thought that maybe we’d get more from Soa, but perhaps she realised that she didn’t need to work too hard and is saving some stunts for later.

Unsurprisingly, Soa was declared the winner and Lova was eliminated.

“From Clermont-Ferrand, Paloma was never afraid to personify female characters even at a young age. Gathering all her talents (acting, writing, directing and sewing), Paloma started doing drag in 2018. She performs in solo acts and with the “King Chefs and Drag Queens” company in numerous Parisian clubs and cabarets. Paloma also made an eponymous short movie, coming out this year, and received an award at the Music and Cinema Festival of Marseille.”

Current Ranking: After a solid start to the competition, Paloma found the spotlight in Episode 2 when she won the acting challenge. 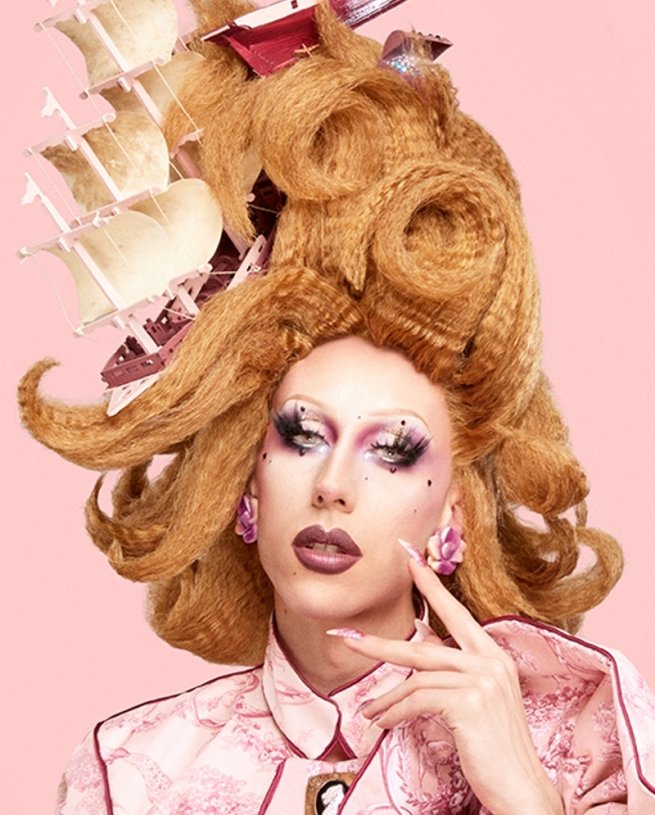 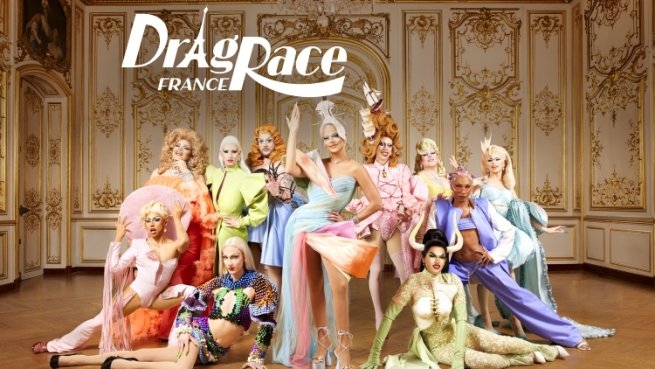 “Soa de Muse discovered drag on YouTube by finding clips of the first season of RuPaul’s Drag Race. Originally from Martinique and living in Saint-Denis, Soa de Muse gets inspiration from their culture. Soa is a well-rounded and captivating artist, talented in singing, dancing, comedy and cabaret. Soa de Muse has been performing for almost 10 years around France and on iconic Parisian stages like Madame Arthur, L’Olympia, le Carreau du Temple or l’Ahlambra. They opened their own cabaret “La Bouche” with 3 other artists, Porte de Clignancourt, in Paris.”

Current Ranking: A very strong start from Soa, winning the first episode, but then in Episode 2 she was lip-syncing – beating Lova to stay in the competition. 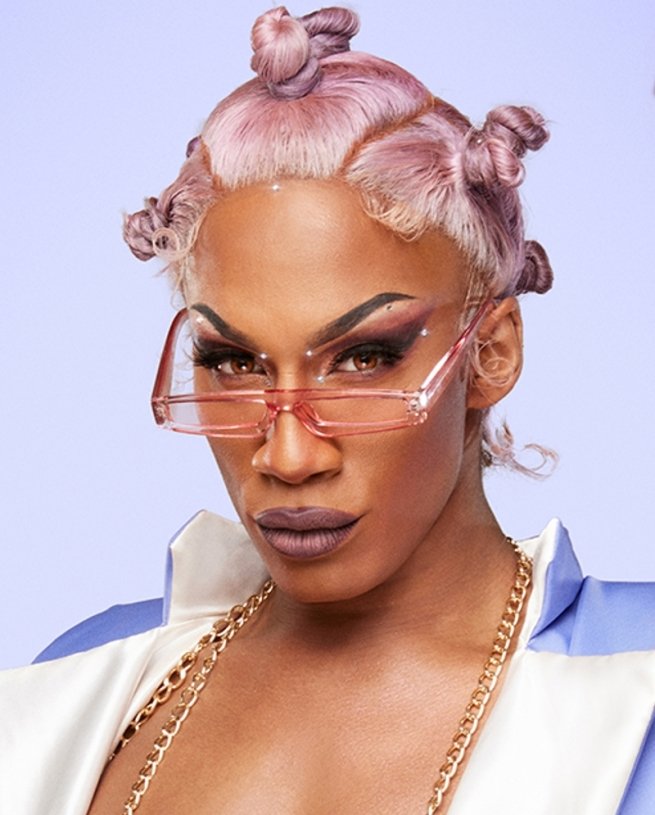 “Born in Castres, La Big Bertha discovered cabaret and the drag scene early in childhood. After 10 years of experience, La Big Bertha is the ultimate French queen of burlesque. She has her own show ‘La Bertha’s Fantasia’ at le Nouveau Casino theater in Paris. La Big Bertha travels and performs in prestigious cabarets, theaters and operas all around France and worldwide.”

Current Ranking: It’s been a roller-coaster so far from Bertha – she was in the Top 3 on Episode 1, and then Bottom 3 in Episode 2. 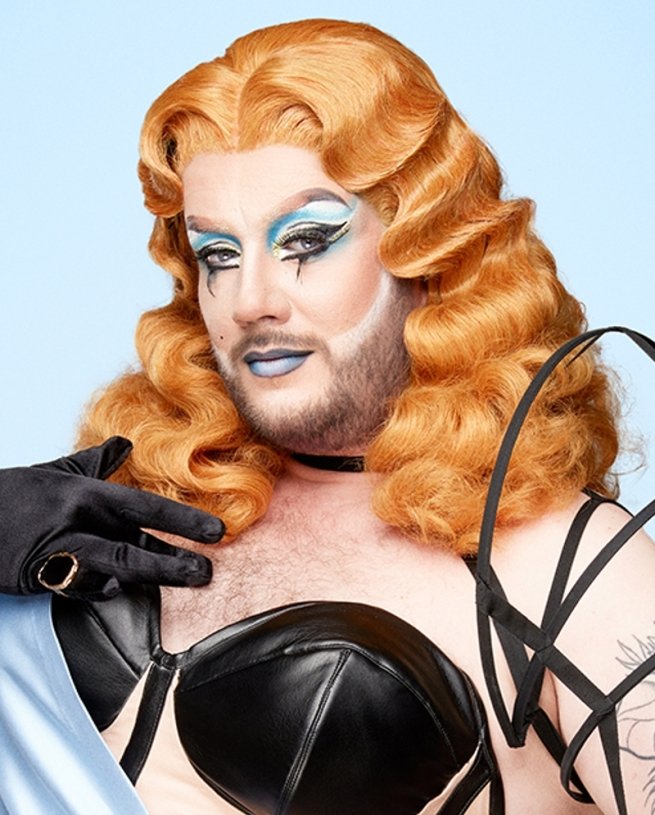 “After only two and a half years of drag experience, Elips placed 3rd in the first season of ‘Drag Contest’ (an Instagram makeup contest) and won the Drag Games in 2021. Self-taught and very creative, Elips makes her own costumes and gives powerful, poetic performances. Since 2019, she has performed in Bordeaux, Paris, Toulouse and Lyon; as well as on the stage of Bordeaux Pride in September 2021.”

Current Ranking: A strong start from Elips – Top 3 in Episode 1, and safe in Episode 2. Could be the dark horse of this competition. 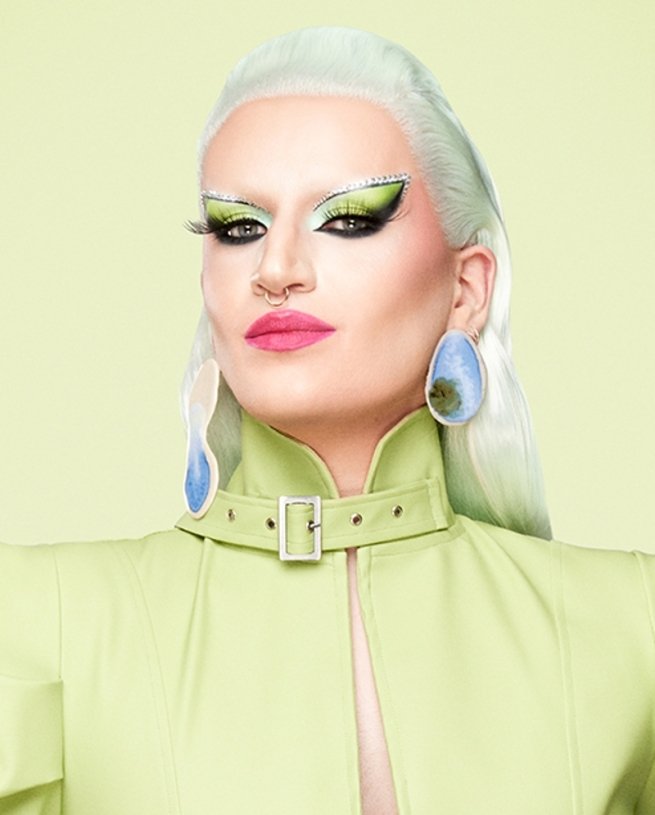 “Mexican Lolita Banana discovered drag in 2018 while working as a dancer at a campsite in Biscarrosse. Torn between her professional salsa career and competing in drag, Lolita Banana’s persona helped her find the right balance between both. Since then, she has participated at Drag Me Up and performed in le Café de Paris, the B Boat and the Rainbowland Party in Nice. Lolita Banana is known for being the iconic host of The Brunch and Queen, the most famous drag brunch in Paris; as THE showgirl of the Parisian scene.”

Current Ranking: A solid start from Lolita, she won the mini-challenge in Episode 1, and was Top 3 in  Episode 2. She’s got lots of personality and gives good TV. 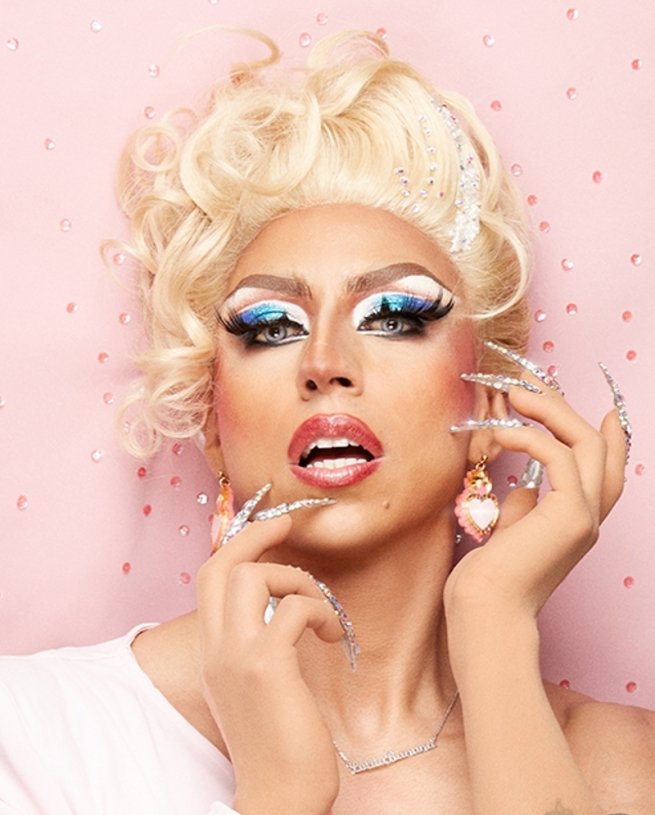 “Born in Royan, La Briochée discovered drag thanks to RuPaul’s Drag Race. In May 2019, she started her career under the drag name MyëVe Märchen and entered two competitions: the Drag Me Upp and Drag Academy. As a trans woman, La Briochée fights for drag to be accessible to everyone, no matter identity, gender, body type or origins. A creative actress and singer, La Briochée is a versatile drag queen. In June 2021, she joined the company of the iconic Parisian cabaret Madame Arthur and started a career as a voice actress.”

Current Ranking: She was safe in both Episode 1 and Episode 2. Acting seems to be her comfort zone – hopefully she’ll make it to Snatch Game. 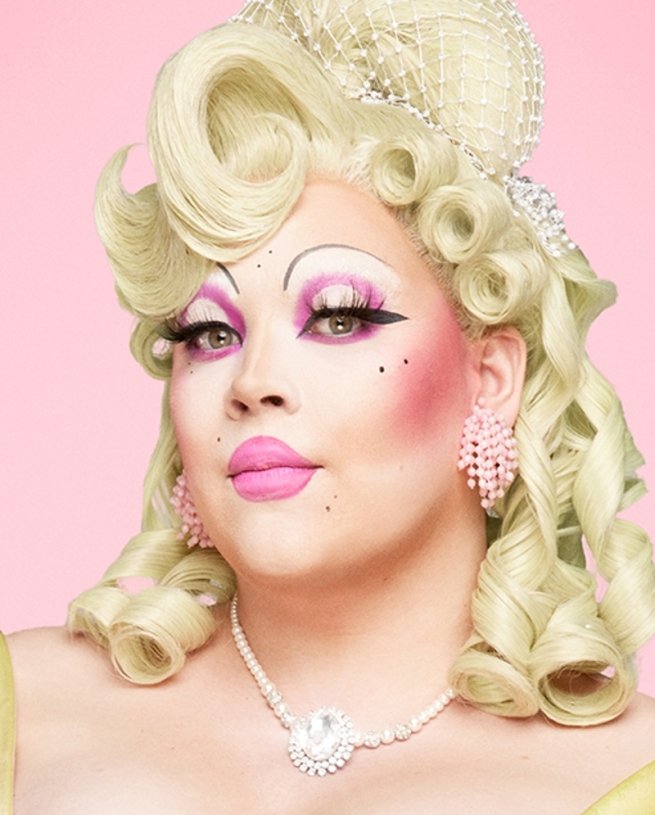 “La Grande Dame discovered drag in Nice where she grew up, and started performing drag five years ago. La Grande Dame started in Nice’s nightclubs (Le Swing and Le Glam) and in Paris where she became a key figure of the drag scene. She’s the most followed French drag queen on Instagram and performs outside of France in Bruxelles, Venise, Monaco and London. La Grande Dame has already walked many fashion runways, including for Jean-Paul Gaultier’s last Haute Couture collection.”

Current Ranking: She was safe in Episode 1, and Top 3 in Episode 2. Looks are really her strong-point. She’s a supermodel. 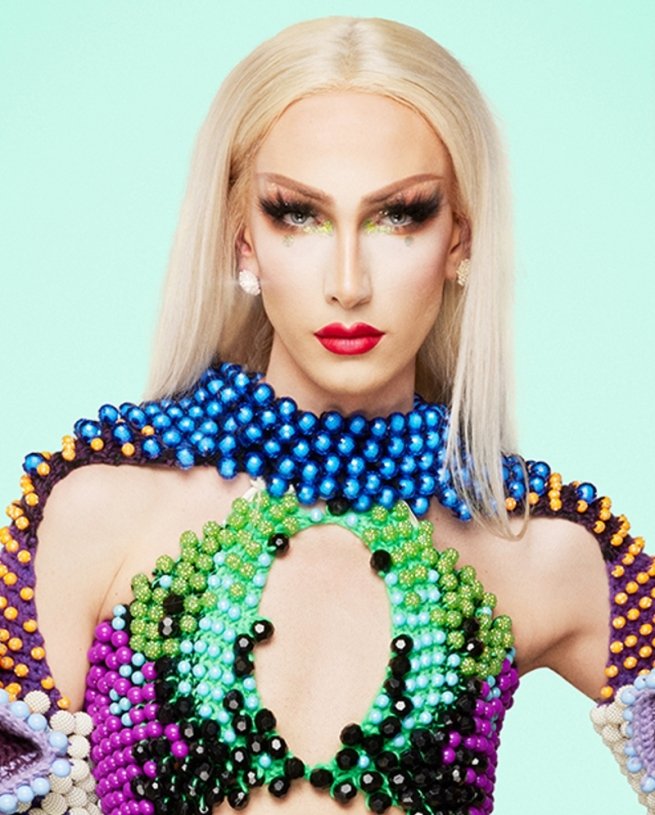 “Kam Hugh grew up in Ardèche before discovering drag through RuPaul’s Drag Race and the Parisian drag scene. For the past 4 years, Kam Hugh has worked as a professional makeup artist and drag queen. Kam Hugh shows her incredible makeup and fashion skills on YouTube, Instagram and performs on-stage regularly in Paris. She has also performed in the U.S., Belgium and Austria for the most recent Life Ball. As the face of major cosmetic brands, she is the first French drag queen to have had her portrait in ELLE France.”

Current Ranking: A shaky start from Kam – Bottom 3 in Episode 1 but felt a bit more confident in Episode 2. 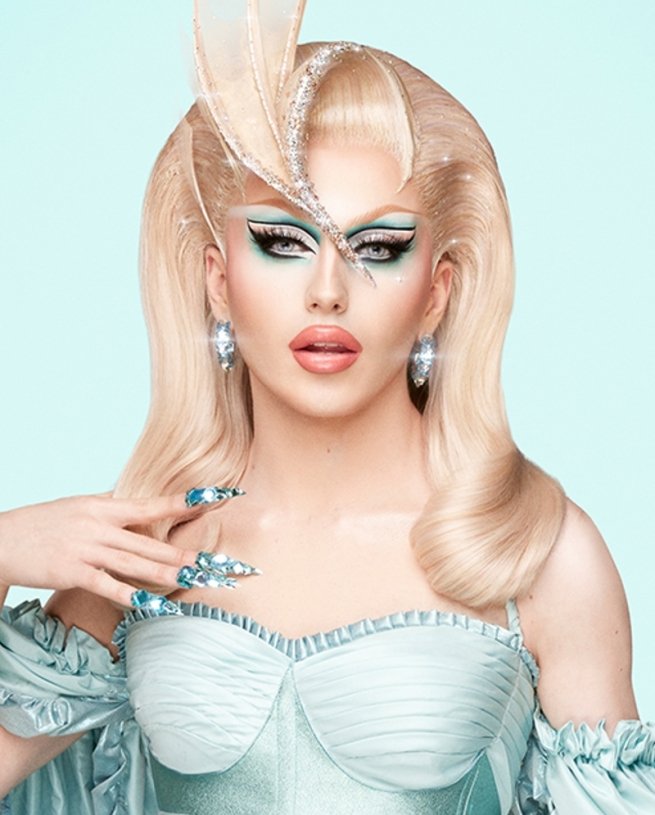 “From Toulouse, Lova Ladiva discovered drag in 2009 through shows like “Matinée Groop” and Ibiza’s “Supermartxe.” She currently performs all over France, Spain and New York where she represented France at World Pride – commemorating the 50th anniversary of Stonewall. With her cheerful disposition and one-of-a-kind personality, Lova Ladiva carries herself with humor and extravagance.”

Final Ranking: A shaky start for Lova, Bottom 2 in Episode 1 and then again in Episode 2. She didn’t survive the second one, beaten in the lip-sync by Soa. 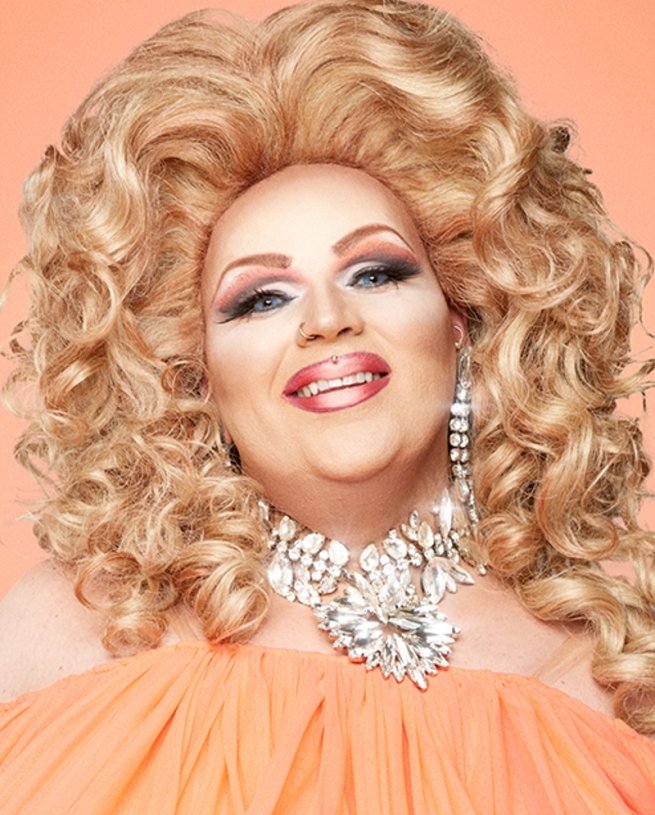 “Originally from Tunisia, La Kahena started her career in 2016 and chose to wear the name of the famous Berber queen and warrior of the 7th century. Currently La Kahena performs all over France and is known for her sharp aesthetic, comedy skills and stage performances where she handles fire. She performed at the Superball in Amsterdam, Dragathon All Star and the 1st season of Clash of Tatas, for which she is now the Parisian host. Proud to represent French multiculturalism, La Kahena is also the first drag queen to have performed at l’Institut du Monde Arabe (Arab World Institute in Paris).”

Final Ranking: It’s never easy being the first eliminated, but someone has to be. Kahena is the Pork Chop of the season. She seems like an interesting performer, but couldn’t quite bring it all together in this first episode, eliminated in the lip-sync by Ladiva. 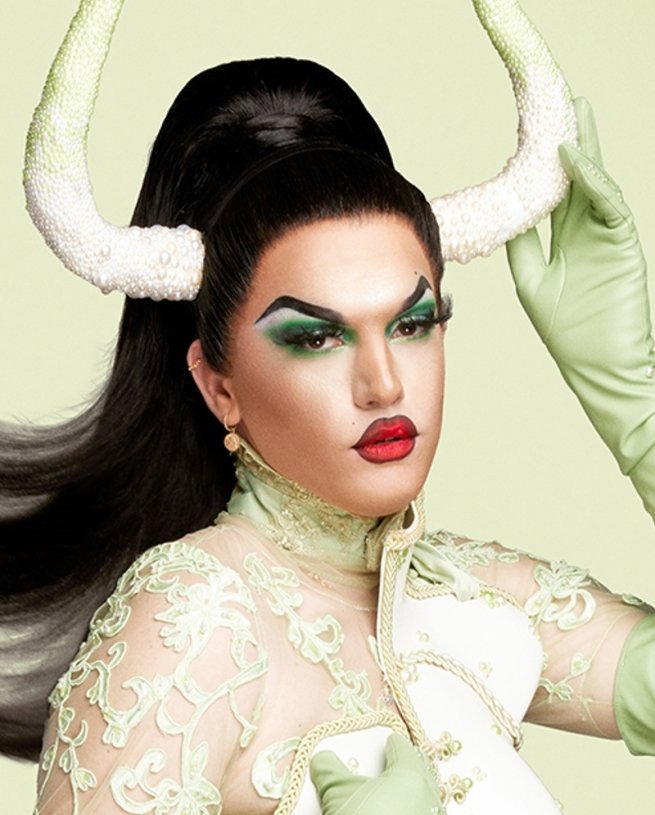