The tragic but true story of England’s gay king

The small town of Neath is one of the best jumping-off points for exploring the valleys of South Wales.

It’s a nice enough town, but what makes it fascinating is its historical context.

The town is dominated by its castle ruins. There’s not much left of them now, but it doesn’t take much imagination to visualise the cold, bleak fortress that was one of the last refuges of Edward II.

Who was Edward II?

History is written by the victors, and Edward II hasn’t fared too well in how that story has been told.

In our mind, Edward II is always the gay king, so we feel some sort of affection for him just on that basis. But the story of Edward II is a little more complicated.

Edward was born in 1284, and became King of England in 1307  –  the sixth in the Norman-French Plantagenet line. He reigned until he was deposed and killed in 1327 by his wife, Isabella. He was 43 at the time of his death.

While his passion for men seems to be confirmed by numerous contemporary sources, Edward did father at least five children.

There appear to have been two key male lovers in his life. First, Piers Gaveston – a knight from Gascony. Later, there was Hugh Despenser – an English lord.

Where did things go wrong for Edward II?

Compared to the strong reigns of his father Edward I and his son Edward III, the reign of Edward II is generally considered to have been a disastrous period in England’s history  –  most notable for the defeat of his army at Bannockburn, which ended English control over Scotland.

Edward’s connections with Wales began with his birth at Caernarfon Castle  –  he was the first English prince to hold the title of Prince of Wales.

At that time, marriages were an important and strategic business. In 1308 – in a move to bolster alliances with France – Edward married Isabella,  the daughter of King Philip IV.

While Edward focused on securing the alliance with France, he appointed his lover Gaveston as regent  -  a key position of power within the English court. Gaveston’s elevation caused resentment within the ranks of England’s powerful barons, and they successfully manoeuvred for the banishment of Gaveston in 1311. In 1312, Gaveston was captured by the Earl of Warwick and killed. Edward was devastated by the death of his lover.

Hugh Despenser was Edward’s nephew-by-marriage. After the death of Gaveston, Edward favoured Despenser with titles and privileges  –  again, angering the powerful barons and earls. By the early 1320s, England’s court was once again deeply embroiled in political intrigues and shifting alliances as various factions sought to build their power and control.

Around this time, a dispute developed between France and England over the territory of Gascony. Edward sent his wife Isabella to France to negotiate peace terms. As part of the peace negotiations, Edward also sent his eldest son to pay homage to the French king, Charles  –  Isabella’s brother. This proved to be a tactical blunder. Isabella, with her son now beside her, refused to return to England.

Isabella’s next move was to join forces with Roger Mortimer. Mortimer was the 1st Earl of March. He was wealthy and powerful. Mortimer was one of the leading forces opposed to the power and influence that Edward had bestowed on Hugh Despenser. Mortimer led a rebellion against Edward in 1321. After being defeated by Edward’s forces at the battle of Boroughbridge, Mortimer was imprisoned but later escaped and fled to France.

In September 1326, the combined forces of Isabella and Mortimer invaded England. Their aim was to remove Edward from the throne.

The invasion by Isabella and Mortimer quickly gathered momentum and support  -  Edward and Despenser were left isolated. They abandoned London in October 1326, heading to South Wales  –  the stronghold of Despenser.

One of the castles where it’s believed that Edward and Despenser took refuge was Neath.

The castle at Neath was originally established between 1114 and 1130. It was built by Robert  –  the Norman Earl of Gloucester. Today, Neath’s castle stands as ruins in the centre of town. It was reportedly destroyed during Isabella’s pursuit of Edward, although it was probably rebuilt and destroyed numerous times since then.

Having failed to raise an army or any sort of defence, on 16 November 1326, Edward and Despenser were captured  -  most likely as they were travelling from Neath to Caerphilly.

Despenser was brutally executed on 24 November 1326. Executions at that time were often public affairs, however Despenser’s demise seems to have been elevated to a public spectacle. He was dragged from his horse, biblical verses were scrawled on his skin, he was condemned to hang as a thief, to be castrated, to be drawn and quartered as a traitor, and his body parts to be dispersed throughout England.

Edward was imprisoned in Kenilworth Castle. In January of 1327, he was forced to abdicate in favour of his son  –  Edward III. Edward III was 14 at the time, and controlled by Isabella and her ally Mortimer.

How did Edward II die?

While he remained alive, Edward II posed a potential risk to the rule of Isabella. On 11 October 1327, Edward was murdered at Berkeley Castle near Gloucester and buried in the Gloucester Cathedral.

While contemporary chroniclers suggest that Edward was suffocated or strangled, the popular version of events is that he was killed by being impaled by a red hot poker shoved up his anus. While this form of torture is a graphic and horrific way to end a King’s life, it’s likely that this is anti-Edward propaganda playing on his sexuality – with the intention to discredit his reputation and memory.

Christopher Marlowe’s play was published in 1593 – soon after his death. The full title of the play is The Troublesome Reign and Lamentable Death of Edward the Second, King of England, with the Tragical Fall of Proud Mortimer.

Marlowe is widely accepted to have been gay. This wasn’t the first time that he’d addressed gay relationships in his work, but Edward II was the most explicitly and sympathetically gay character that Marlowe had tackled.

It’s a play that continues to be performed today. 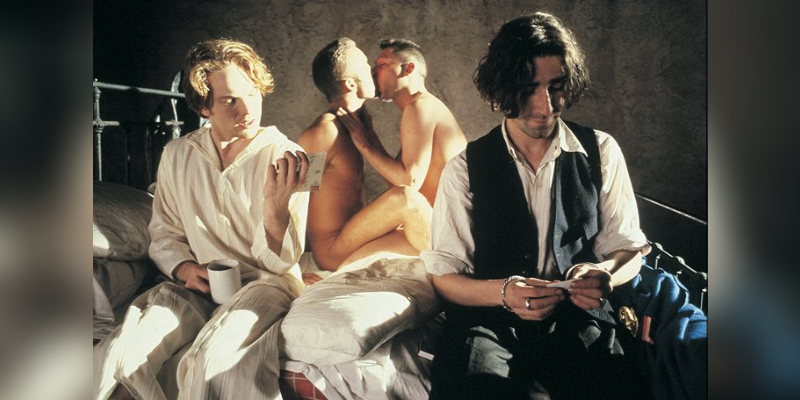 Released in 1991, iconic queer filmmaker Derek Jarman brought his visual flair and deconstructed storytelling to the rise and fall of Edward II – using Marlowe’s play as his jumping off point for this adaptation.

Critically acclaimed as one of Jarman’s best, the film stars Steven Waddington as Edward II, Andrew Tiernan as Piers Gaveston, and Tilda Swinton as Isabella.