Who Will Unmask The Masked Singer Season 4 Title?

Season 4 of The Masked Singer already has two weeks in the books, with plans for new and unique features that will set this year’s series apart from the three previous competitions.

Among this year’s 16 competitors is featured the first duet costume in the history of the show. The Snow Owls are this unique twosome and their arrival leads to a number of questions, including, are the two singers behind those masks twins?

The 2020 season also is showcasing the first puppet costume ever seen on the stage of The Masked Singer. A year that began with Baby Yoda stealing the hearts and minds of viewers of the series The Mandalorian now adds Baby Alien to the repertoire of lovable mechanical characters.

Baby Alien is a puppet character sitting in a rocket, which is actually a costume for one of this season’s contestants. A contestant, who by the way, must do double duty while performing. Not only will the celebrity behind Baby Alien have to sing, but the person inside the costume must be operating the puppet at the same time.
The Masked Singer is of course a singing competition series featuring masked celebrities battling it out to be the last singer standing and therefore the final one to have their identity revealed.

The show is being hosted once again by Nick Cannon and features panelists Ken Jeong, Jenny McCarthy, Nicole Scherzinger, and Robin Thicke.

According to a release from the show, the season four celebrity contestants have combined to sell more than 281 million records worldwide. They’ve appeared in more than 5,475 episodes of television and 151 films, appeared in five Super Bowls, have four stars on the Hollywood Walk of Fame, and one Time 100 Most Influential person award. 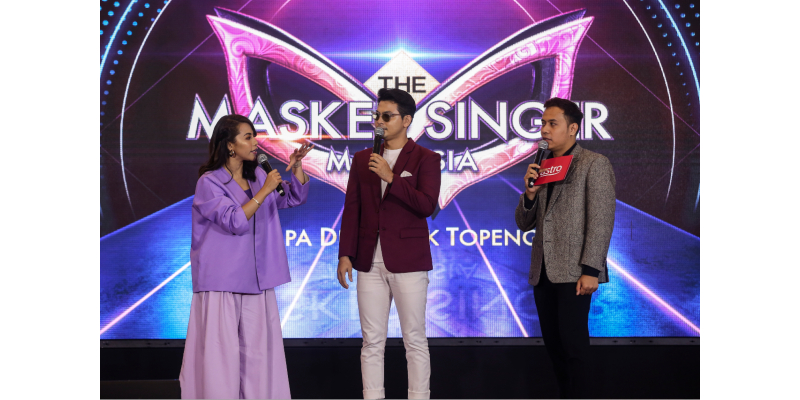 Through two episodes only one singer has so far been unmasked. Wearing the mask of a dragon and performing Momma Gonna Knock You Out by LL Cool J, it was instead exit the dragon, as the performer was figuratively knocked out. Required to unmask when voted off the show, The Dragon turned out to be rapper Busta Rhymes.

His 11 Grammy Awards weren’t enough to get Rhymes past the opening-episode competition he faced from the Snow Owls, Sun, Popcorn and Giraffe in the first round of Group A competition.
Rhymes described the experience of performing inside the mask and costume as like “being in an oxygen tank with no oxygen.”

He did praise the show’s producers for the precautions put in place to protect the competitors during the ongoing COVID-19 pandemic.

“Once we were able to put that costume on, and turn that music on, and you get out there and start doing your music, you kind of forgot about all of that COVID protocol s**t,” Rhymes told Entertainment Weekly.

“You’re able to escape it. So I think that was very well done by the production and the network.

“I’ve had to deal with some of these COVID testing experiences outside of [The Masked Singer]. I can honestly say, none of them has been able to compete with the level of accommodation that production provided.”

Everyone watching The Masked Singer will be rooting for a specific competitor. That being the case, why not back up your choice with a little bit of action so that when you’re proven right, it’ll be that much more rewarding?

There are a number of online sportsbooks where wagering on The Masked Singer is offered. The BetOnline sportsbook is one of the best and most trustworthy of these online betting sites.

BetOnine is already offering odds on the show’s outcome. Do you like the Snow Owls? They’re offered at odds of +600. Backers of Baby Alien can access a line of +1600 in this betting market. The baby the longest shot on the board among the remaining competitors.

Popcorn (+350) and Crocodile (+400) are among the top three contenders, but the gleam of the favorite’s light shines on the Sun. That Masked Singer is the betting chalk at odds of +250.