Troye Sivan always has our attention, but when you add Kacey Musgraves and Mark Ronson into the mix, then it’s go-time.

This reworked version of Easy – and the accompanying filmic video – is a mood that we can definitely get into.

Troye’s most recent release is his EP, In A Dream.

Track-listing – In A Dream

This is an introspective encounter between Troye and his younger self.

The track is about trying to get a relationship back on course. Sivan directed the video.

“A story that’s still unfolding, this small collection of songs explores an emotional roller-coaster period in my life when the feelings and thoughts were most shockingly fresh…” explains Sivan. “Revisiting these songs and moments is tough, but I’m proud of this music and excited to have it out in the world.”

“Take Yourself Home is one of my favourite songs I’ve ever written…” says Sivan. “The song is kind of a pep talk with yourself and the place you’re from. Grappling with your place in the world. I write these songs as a diary entry, then as life and places change and relationships change, songs can take on a new meaning entirely. Clearly that has happened for this song, with what is going on in the world right now.”

What was the drama in New Zealand?

In a quick-fire Q&A with an LGBTQ publication in New Zealand, the final question posed to Sivan was “Top or Bottom?” The answer from Sivan that was printed in the interview was “Ooo… definitely passing!”

When Sivan’s fans flagged the interview on his Twitter feed, he confirmed that it was a question that he felt uncomfortable about.

“I thought about asking the interviewer about his absolute fave sex position after that last question…” wrote Sivan. “But then I remembered how wildly invasive, strange and inappropriate that would be. Didn’t stop him though!” 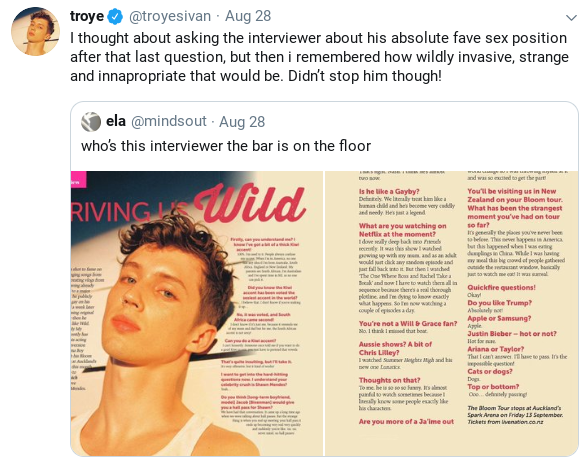 Why did Sivan fall out with Out?

It didn’t stop there, though. Sivan also took exception to the way that Out magazine covered his concerns about the sex-position question.

Out have since revised their article to remove the comments that Sivan objected to.

Does this mean we can’t talk about sex?

We wouldn’t ask Beyoncé what she likes to do in the bedroom. Unless someone is volunteering that topic as a discussion point, it’s a pretty personal subject. We totally respect that Sivan has set some boundaries about his personal life.

It is easy to see how, as queer journalists, we could find ourselves trying to make this conversation happen. It’s so powerful to have a queer musician who is a global celebrity, it’s difficult not to carried away with the idea of how important it might be to hear that celebrity talking about queer sex.

In theory, that might work. In practice, you’re asking queer musicians to operate with less privacy than anyone else.

There’s been some on gay Twitter who have cited Sivan’s reluctance to talk about sex as an example of bottom-shaming. The argument is that if we didn’t see being penetrated as somehow inferior to other forms of sexual activity then we’d be less hesitant in talking about it. But Sivan has addressed this head-on – he’s all in favour of tackling any shame associated with sex, but that doesn’t mean we all get a front-row seat to his sex life.

The growing confidence of Troye Sivan

Sivan’s music is polished  –  ranging from bright, vibrant tracks, to more introspective but still very listenable music that demonstrates his maturity and experience in the music industry.

You can sense a growing confidence in Sivan. He’s showing us the world how to be an authentic pop-star, simply by being himself, and writing songs that reflect his experience and his point of view.

Sivan has been working hard in the entertainment industry since about the age of 11, when he started appearing in television shows in Australia where he grew up. He talked publicly about being gay in a YouTube video, when he was about 18  –  he’d told his family a few years before that.

“I just got to this place where I was so gay in my personal life, and really proud of it…” Sivan explained in an interview with Vogue. “And I was like, I want to share this with the whole world.”

You get the sense that Sivan has always had a fairly clear and unapologetic view of who he is. What’s fantastic is that it’s working for him  –  Bloom, his second album, topped the charts and he’s toured extensively  -  it’s not just the gays that are buying Sivan’s music. Sivan also picked up a Golden Globe nomination for the track Revelation from the film Boy Erased – in which Sivan also made his major acting debut. He’s a major star with wide appeal, but he does question whether being proudly queer sometimes limits his appeal.

“Part of me wonders sometimes if I would be more commercially successful if I wasn’t gay or not as ‘in your face gay’…” Sivan explained to the Homo Sapiens podcast. “Sometimes, it can be frustrating because I’m giving my all and not having some humongous radio smash all over the world. Maybe the music just isn’t good enough, maybe the world is obsessed with hip hop right now and I’m making the furthest thing from hip hop. It could be a myriad of other things, but a part of me wonders sometimes, is the world actually ready right now for what I’m trying to be?”

What’s particularly appealing about Sivan, is that he’s not trying to project some sort of hyper-masculine image  -  the sexual awakening that he seems to be exploring through the music of his album Bloom has an undeniably queer aesthetic.

“Sometimes I really forget that there are straight people in LA,” Sivan said, in an interview with The Guardian. “I have almost exclusively LGBT people around me. That instilled a sense of confidence in me – that I have every reason to be proud of who I am.”

For the past four years, Sivan has been based in Los Angeles – living with his boyfriend Jacob Bixenman.

It’s hard to articulate how powerful it is to have queer role models such as Troye Sivan. For young LGBTQ people to be able to support and idolise a successful musician who not only shares a lot of their experiences, but also sings about them  -  it’s a total game-changer from when pop-stars had to remain in the closet for fear of damaging their career.